For Donald Trump, the former US president, beating the drum of “America first” was something of an obsession. “The future doesn’t belong to the globalists,” he once told the UN. “The future belongs to patriots.”

Last year, he was rejected by voters in favour of Joe Biden, a committed internationalist who vowed: “America is back.” Yet the past week has shaken the faith of old allies and led some to question whether a strain of the “America first” mantra lives on.

In a speech this week, a defiant Biden expressed no regret for America’s chaotic and humiliating withdrawal from Afghanistan, which was quickly overrun by the Taliban, putting thousands of Afghans who worked for US forces in danger and wiping out human rights gains for millions of women and girls.

The president insisted that he was following the will of the American people and could not justify spending more American blood and treasure. His attempt to blame the Afghan national army for lacking the will to fight was described as “shameful” by the British politician Tom Tugendhat, who served as an army officer in Afghanistan.

On Wednesday, turning to the coronavirus pandemic, Biden announced that Americans who had received two vaccine doses would be eligible for a third to combat waning immunity, the highly contagious Delta variant and the threat of widespread vaccine hesitancy. There was another global backlash.

The World Health Organization (WHO) has called for a moratorium on booster jabs until the end of next month, contending that people yet to receive a single dose should take priority. Tom Hart, acting chief executive of the One campaign, told the Associated Press last month: “The idea that a healthy, vaccinated person can get a booster shot before a nurse or grandmother in South Africa can get a single jab is outrageous.”

Biden’s cold-eyed focus on US interests dismayed many who value him for the emotional empathy that his predecessor sorely lacked. But it also came within the context of an economic agenda in which he has pushed back against globalisation by emphasising the needs of American workers making products on American soil.

He used the word “America” or “American” no fewer than 36 times during remarks earlier this month on strengthening US leadership on clean energy cars and trucks. “And when we invest in our infrastructure, we’re going to buy American products, American materials, and services from American businesses made in America, by American workers,” Biden said.

Again, America first by another name.

Larry Jacobs, director of the Center for the Study of Politics and Governance at the University of Minnesota, said: “‘America first’ is Trump’s language for it and I doubt that Biden’s people would use that. I would describe it as ‘progressive nationalism’ because the point is to divert resources from Afghanistan, from global health issues, from trade, and focus it in a real disciplined way on helping Americans.”

Unlike Trump, Biden is investing in international agreements and institutions, Jacobs acknowledged, but also taking a hard-headed approach. He pulled out of Afghanistan because it was no longer serving American interests. He has not sought to emulate predecessors George W Bush or Barack Obama by investing political capital in trying to bring democracy to the Middle East.

Jacobs continued: “There’s no doubt there’s a persistent strain of nationalism and a focus on delivering for middle-class Americans, and it’s being pursued with much greater discipline and consistency and vigour than we’ve seen under previous Democratic presidents.

“If you look at the people around Biden, many of them thought long and hard why Hillary Clinton lost to Trump and their conclusion was that American foreign policy and international economic relations had lost sight of middle-class working Americans. Jake Sullivan [now national security adviser] was very convinced that Trump had won partly for the kind of racial and anti-immigration arguments that he made but also because he had identified a real weakness in Democratic foreign policy.”

Biden came into office seven months ago inheriting extraordinary crises: the coronavirus pandemic, economy, racial justice and a Trump-charged assault on democracy. A laser-like focus on domestic imperatives might therefore be expected. It could also be argued that every president has tried to put his own citizens first, some more subtly – and successfully – than others.

Wendy Schiller, a political science professor at Brown University in Providence, Rhode Island, said: “It’s not so much about a wholesale ideological position of ‘America first’. This president has clearly decided that his mission, his set of goals is very much focused on improving conditions in the United States of America and essentially avoiding loss of life.

“What makes it so striking is that he’s probably the first Democratic president in a really long time who has not felt the need to explain himself on that. That’s what’s so difficult for the press that’s used to covering this or advocates for international engagement by the United States to swallow. You might expect this from a Republican. You might expect this certainly from Donald Trump, who was very clear about it. You didn’t expect it from Biden.”

The president has had relatively little to say about pressing international issues such as Cuba, Ukraine and the plight of the Uyghurs in China, Schiller noted. Such topics have generally been confined to anodyne written statements rather than set-piece speeches.

Even so, Biden has promised to return America to the head of the global table. He immediately rejoined the Paris climate accords and soon attended meetings with the European Union, G7 and Nato, seeking to heal rifts opened by Trump. In December Biden will host leaders of the world’s democracies at a virtual “summit for democracy”.

As for the Afghanistan debacles, he scrambled additional US troops to Kabul airport to evacuate US citizens and thousands of eligible Afghans and their families – though whether America will welcome a fresh influx of refugees is an open question.

The president would bridle at suggestions that he or his team are callously turning their back on Afghan women and girls. On Tuesday, Sullivan told reporters: “I say that truly, deeply my heart goes out to Afghan women and girls in the country today under the Taliban. We’ve seen what they’ve done before. And that’s a very hard thing for any of us to face. 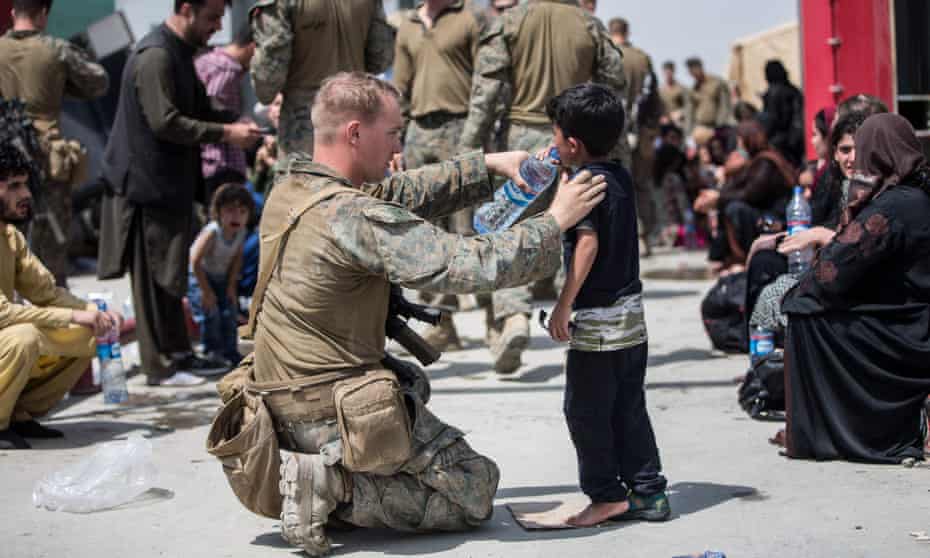 A US marine provides fresh water to a child during an evacuation at the airport in Kabul on Friday. Photograph: Samuel Ruiz/US Central Command Public Affair/AFP/Getty Images

“But this wasn’t a choice just between saving those women and girls, and not saving those women and girls. The alternative choice had its own set of human costs and consequences. And those human costs and consequences would have involved a substantial ramp-up of American participation in a civil war, with more loss of life, more bloodshed, families here in the United States who would be asking a different form of the question you just asked.”

A day later, Biden defended his decision to give Americans a third vaccine dose before many around the world have received their first. In June and July, he said, America administered 50m shots within the US and donated 100m shots to other countries, meaning that America has donated more vaccine to other countries than every other country in the world combined.

The US will donate more than 200m additional doses to other countries in the coming months. “We can take care of America and help the world at the same time,” Biden added. “We’re going to be the arsenal of vaccines to beat this pandemic as we were the arsenal of democracy to win world war two.”

The second world war reference might have been jarring to Europeans who fear that the US is no longer the trusted linchpin that it was for 70 years. But Biden has had a lifetime to absorb the lessons of his country’s follies in Vietnam, Afghanistan and Iraq and appreciate the limits of American power.

He has also made clear in numerous speeches that he regards the US’s domestic strength as critical to making a global case that in the 21st century democracies can still deliver for their people more effectively than autocracies such as China.

Lawrence Haas, former communications director for Vice-President Al Gore, said: “Whether it comes to Afghanistan or it comes to Covid or it comes to anything else that we’ve seen so far, I understand the concern about ongoing America first-ism but I do believe that these events are peculiar in their own way and do not add up to an America first strategy.”

Haas, author of The Kennedys in the World, added: “I do believe that Joe Biden remains an internationalist in his gut and believes deeply in American leadership. You see it with him defending political dissidents abroad and promoting freedom and bringing the United States back into some of the global bodies that Trump removed America from, trying to resurrect some kind of nuclear related agreement with Iran and obviously being very engaged in what I see as the emerging cold war with China.”

GMB staff desperate for Piers Morgan return: ‘It’s not beyond the realm’

Jesy Nelson on leaving Little Mix: ‘I felt everybody hated me’ | Little Mix