Staff and players lie on the field as they take cover following gunshots during the game (Picture: Jeff Martin/Reuters)

Two of the victims at the match between Williamson High School and Vigor High School in Alabama were children.

All four have been taken to hospital, where one is in a critical condition.

Players got down low on the grass as the shots rang out in the Ladd-Peebles Sports and Entertainment Complex in Mobile, and the game was suspended.

The victims were three men and a woman, whose ages have not been disclosed.

In a media briefing outside the stadium, police chief Paul Prine said the shooting happened on an exit ramp.

He said officers found four shell cases in the area and believe as many as seven shots fired may have been fired, CNN reports. 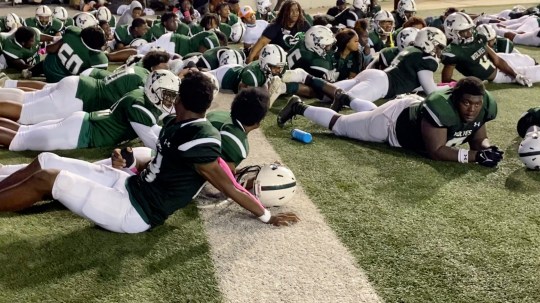 Terrified players dropped to the floor when they heard the shots (Picture: Jeff Martin/Reuters) 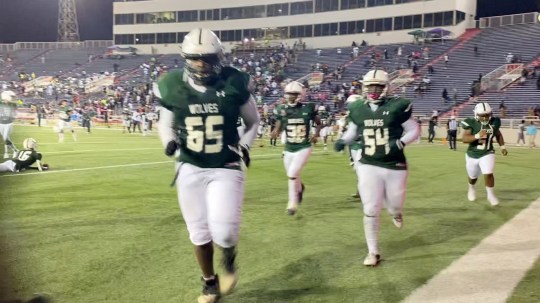 They then rushed off the field (Picture: Jeff Martin/Reuters)

Mr Prine said: ‘The shots were fired on the west ramp. It was not in the arena or in the football area where the stands were at, but it was here on the exit ramp coming out of the stadium.

‘We have several individuals that maybe involved, but possibly just one shooter.’ 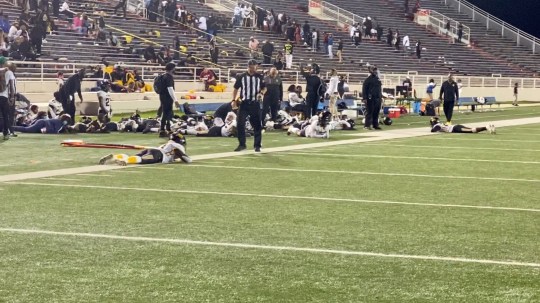 No motive for the attack has yet been established, but two men may have been involved in a row moment earlier.

Officers were working to track down at least two people who fled the scene in a white sedan.

Mr Prince said it was an isolated incident with no further threat to the public.

Leicester: Cop ‘boasted about sex with boy to undercover colleague’