If you happen to be in Piccadilly Circus in the next few weeks, you could catch the 3D advert for Mark Zuckerberg’s latest metaverse bet.

This is the first time the tech giant has bought out space on London’s Piccadilly Lights, with the ad campaign for Facebook-owner Meta’s new virtual reality headset (VR) set to run until the end of the year.

This is part of a wider holiday campaign to promote the company’s VR headset Meta Quest 2, the virtual reality (VR) headset developed by Meta Platforms.

Just this month, Meta fired 11,000 employees across Facebook and Instagram in a series of mass layoffs as the company grapples with its massive investment into the metaverse.

In October, Meta forecasted a weak holiday quarter and significantly more costs next year wiping about $67 billion off Meta’s stock market value, adding to the more than half a trillion dollars in value already lost this year. 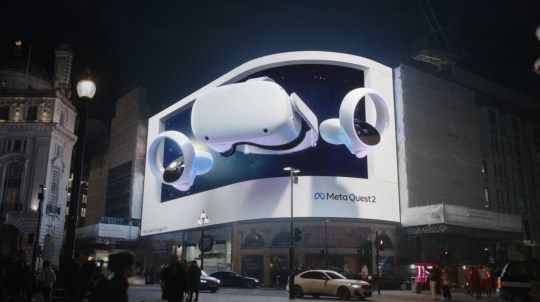 This is part of a wider holiday campaign to promote the company’s VR headset Meta Quest 2 (Picture: Meta/YouTube/The Drum)

The disappointing outlook comes as Meta is contending with slowing global economic growth, competition from TikTok, privacy changes from Apple, concerns about massive spending on the metaverse and the ever-present threat of regulation.

With this campaign, the company could be hoping to boost sales during the holiday sales.

Outside of London, the campaign will also feature on billboards in Manchester and Nottingham.

Most recently, the company launched the $1,500 mixed reality Quest Pro headset. In spite of all the criticism, Meta has now confirmed that a mainstream, lower-cost follow-up to the 2-year-old Quest 2 is coming in 2023.

Chocolatier’s crisp-stuffed chocolate bars could be stocked in Aldi