A government extremism adviser has admitted during a private meeting that it is wrong to label Extinction Rebellion (XR) supporters as “extreme”, despite the home secretary, Priti Patel, condemning the group as “criminals” who threaten the nation’s way of life.

John Woodcock, the former Labour MP who was asked by the Home Office this year to examine disruption and violence by extreme political groups, sought to reassure XR activists that he did not regard the movement as uniformly extreme during a Zoom video conference call last month. “You’re worried that I want to label everyone who supports XR as extremists and that is certainly not the case,” he said.

Woodcock, who now sits in the upper chamber as Lord Walney, also accepted he needed to know more about climate science and agreed there was a need for urgent action to address the climate crisis.

“I have become increasingly convinced of the need to act further and faster than we have,” he said. “I supported the Labour party’s position of declaring a climate emergency [in parliament] but what comes from that is not clear in my mind.”

Woodcock’s reassurance comes on the eve of XR’s latest campaign of non-violent civil disobedience, which is targeting the City of London, in order to end fossil fuel investment. The protests are expected to be some of the most significant yet, with growing numbers of people terrified by the findings of the latest climate report from the world’s leading authority on climate science, the Intergovernmental Panel on Climate Change, and increasingly extreme weather events.

Fears are mounting in the XR movement that activists will be raided by the police, spurred on by Patel’s open hostility to the group’s tactics. Cressida Dick, the Metropolitan police commissioner, has described the group’s plans as “extremely frustrating” and asserted that Londoners do not support “hugely disruptive protests”.

Woodcock – who was appointed as the government’s independent adviser on political violence and disruption in November – made his comments on the call, which has been seen by the Observer, after impassioned pleas by a diverse range of XR supporters.

John Woodcock, the former Labour MP who was asked by the Home Office this year to examine disruption and violence by extreme political groups. Photograph: Jeff Gilbert/Rex Shutterstock

Amelia Halls, 23, who is part of XR’s social media team, told the peer that young supporters feared the consequences of being branded extreme. “We protest because we know without significant and meaningful action … we won’t have a future,” she said. “By opening up this inquiry into extremism and by naming Extinction Rebellion, what this inquiry is doing is ensuring that thousands of young people across the UK as individuals will be considered extremists and this will ruin their lives.”

Robin Red, who is part of an XR samba band, said black activists were worried they would be targeted by the police if Extinction Rebellion was classed as extreme. “As a person of colour, you don’t want to get nicked – your life changes in two minutes … you can’t get a decent job and housing is affected,” Red said. “Being an activist is dangerous enough as it is – to conflate Extinction Rebellion with an extremist organisation basically puts a mark on my back.”

Rabbi Jeffrey Newman, who is part of XR Jews, told the peer that limiting protest rights was dangerous. “We are in no way extreme, but we express our democratic rights as enshrined in the social contract between government and people, and imperilling these rights threatens us,” he said.

However, Woodcock left open the possibility he might describe parts of the group as extreme in his report. He asked if XR was hiding a “far-left” anti-capitalist agenda and claimed there were concerns that far-left groups might be infiltrating the movement.

Woodcock, who will present his recommendations to Patel and Boris Johnson, claimed the group might end up abandoning democracy itself. “You can change the form of democracy, make it more participatory, but ultimately the public are not going to accept … the level of economic reduction, which you believe is necessary, and therefore … you will end up in an alternative to democracy itself,” he said. 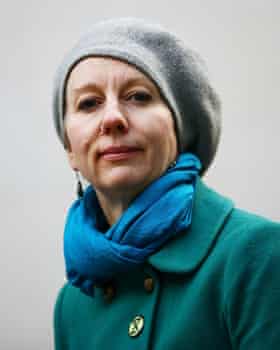 Dr Gail Bradbrook, a co-founder of XR who chaired the meeting, stressed the group wanted more democracy not less, with citizen assembles guiding climate policy. She added she was worried Woodcock’s inquiry was politically motivated and had been set up to silence XR. “We’re concerned that you’ve already made your mind up about us,” she said.

Shami Chakrabarti, the former shadow attorney general, said it was dangerous to equate dissent with disloyalty and non-violent protest with terrorism. “It begins with a sloppy lack of legal definition and soon critics of government policy are branded as enemies of the state. It would be ironic indeed if just before hosting Cop26 [the climate change conference], the UK were to promote a new McCarthyism, with those sounding the alarm against climate catastrophe as the reds under the bed,” she said.

Woodcock said he could not comment further while the review was ongoing. “I wanted to hear the views of Extinction Rebellion activists as part of my review, which is gathering evidence from a wide range of sources and considering issues such as the boundary between the right to protest and illegitimate disruption that may undermine public support for important causes,” he said.

Patel told the annual conference of the Police Superintendents’ Association last year that XR’s campaign of civil disobedience was “a shameful attack on our way of life, our economy and the livelihoods of the hard-working majority”.

Last year, the police were forced to withdraw guidance suggesting XR was based on an extremist ideology, which should be reported to authorities running the Prevent counter-terrorism strategy.