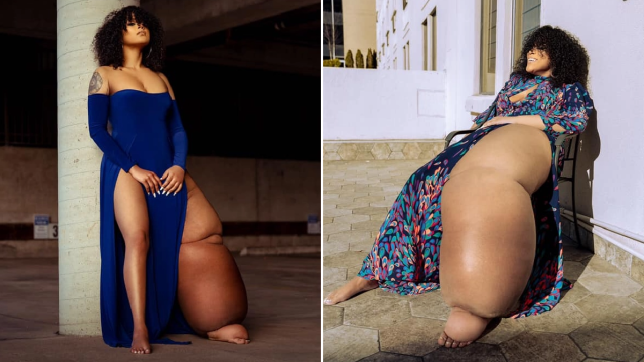 Mahoney Geter used to feel insecure about a medical condition that leaves her with a swollen left leg – but says she has now learned to embrace it (Picture: WATE)

A woman who suffers from a condition that makes one of her legs swell with fluid has embraced her disability and wants to become a model. Mahongany Geter, 23, used to insist that photos be taken from the waist up only because of her lypmhedema, which means her body doesn’t flush fluids out propertly.

She became a recluse over fears about what people would think of her leg, but now goes out to meet friends, and has become more confident with displaying her legs in photos.

Mahogany, from Knoxville in Tennessee, explained: ‘I did feel alone because I thought I was like the only person in the world to have this condition. Growing up with it of course, I was depressed and I felt like pretty much like God had cursed me and I used to cry all the time.

Doctors have told Mahogany there is no cure for her condition, although she hopes to have physical therapy and surgery to lessen the swelling in her left leg.

Mahongany explained that she finally began to accept herself after a 2017 photoshoot, and hopes her story can inspire other people who worry about their bodies.

She told WATE: ‘Something just told me maybe I can use this as an opportunity not only for myself but for other people

I try to pursue modeling in hopes that other people will find confidence in themselves like I’m learning how to.

‘God gave you your condition for a reason.

Even though it seems very tough especially mentally, he gave it to you because one you can bear it and two, shoot, you can rock it.’