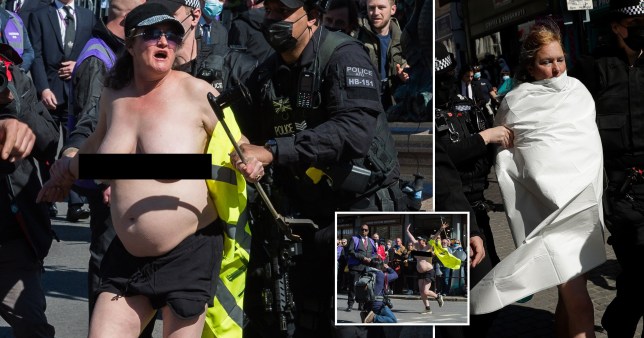 A woman was detained by police as the Royal Family lay the Duke of Edinburgh to rest on Saturday (Picture: AP)

A protester who allegedly ran through the streets of Windsor topless shouting ‘save the planet’ following a minute’s silence for Prince Philip will face court.

Marissa Scott, 55, was charged on Sunday with causing harassment, alarm or distress under the Public Order Act after an incident on Saturday near Windsor Castle, where the Duke of Edinburgh’s funeral was being held.

She was detained by police after jumping on a statue of Queen Victoria shortly after the nation fell silent at 3pm in honour of the Queen’s late husband.

Scott, from Merstham, Surrey, will appear at Slough Magistrates’ Court on June 10.

The Queen was seen sitting alone due to coronavirus restrictions as she said goodbye to her partner of 73 years.

The monarch’s family is said to be taking it in turns to join her for walks as she prepares to spend her 95th birthday without Philip on Wednesday.

A new portrait of Her Majesty was set to be released to mark the big day, but this has now been cancelled as she continues to grieve.

Prince Harry and Prince William were seen leaving the funeral service together as the brothers put their differences aside to celebrate their grandfather’s life.

A body language expert has claimed the siblings shared ‘a genuine moment of unity’. 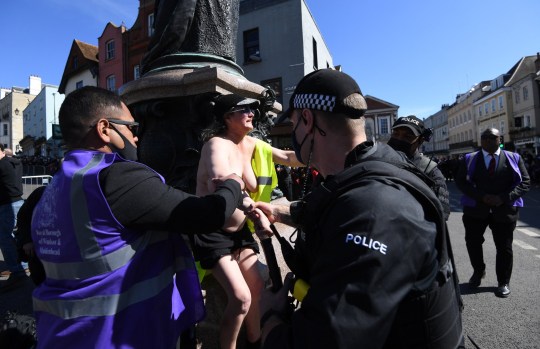 The woman is accused of causing harassment, alarm or distress under the Public Order Act (Picture: EPA) 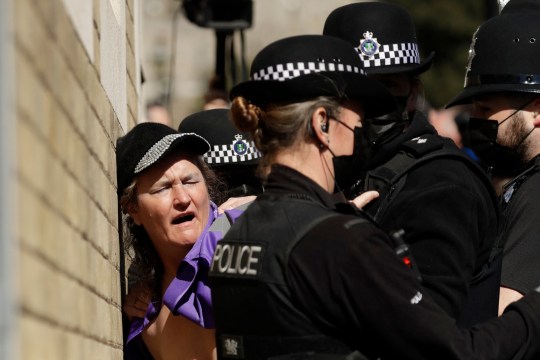 She will appear at Slough Magistrates’ Court on June 10 (Picture: AP)

The Duke of Sussex is believed to have held two hours of peace talks with his father and brother following the service.

It comes after he and wife Meghan Markle made explosive allegations about the Royal Family in an interview with Oprah Winfrey.

An unnamed member of the family was accused of raising ‘concerns about how dark Archie’s skin may be when he’s born’. These remarks were not made by the Queen or Philip, Oprah later clarified.

The duchess also claimed ‘the firm’ refused her help when she told them she was having suicidal thoughts.


In a statement issued by the Queen, Buckingham Palace said the whole family was ‘saddened’ by the ‘serious allegations’ which would ‘be addressed privately’ – although added that ‘recollections may vary.

Meghan decided not to attend the funeral after doctors advised her not to travel while pregnant.

She left a handwritten note for Philip on a wreath laid in St George’s Chapel and is believed to have watched the funeral on television in LA.