Woman ‘heartbroken’ after puppy chocked on biscuit in Starbucks treat

Megan said she’s not sure if she’ll ever get over Bonnie’s death (Picture: Kennedy News)

A ‘heartbroken’ dog owner says her French Bulldog puppy choked to death after Starbucks put a biscuit in its ‘puppuccino’.

Megan Harrison, 24, visited the coffee chain in Festival Park, Stoke on Trent, on September 7 to buy the creamy treats to take home for her dogs.

Megan bought three puppucinos – a cup of whipped cream made especially for dogs – which staffed topped with Bonio dog biscuits.

Shortly after finishing her treat, 18-week-old Bonnie was found dead after choking on the toppings.

Megan’s fiancé spent 10-minutes desperately trying to remove the biscuit and revive Bonnie by doing CPR there was ‘nothing they could do’ to save her.

The chain said it was ‘really upset’ to hear about Megan’s loss and stated that puppuccinos are not an official item on the Starbucks UK menu. 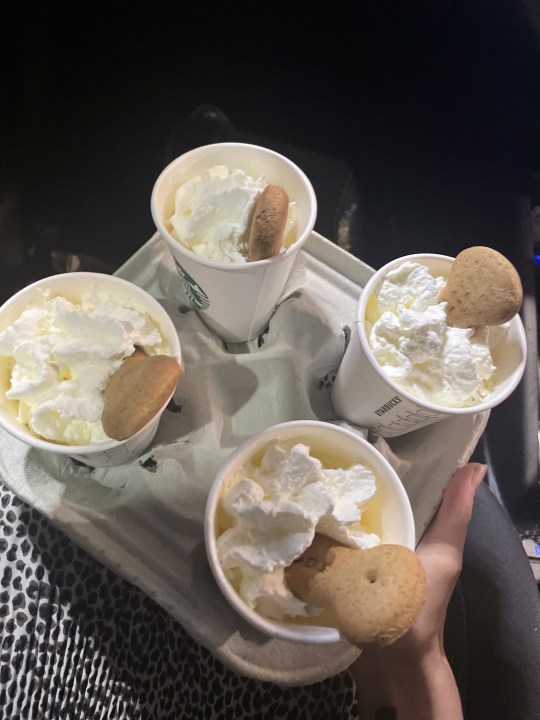 The Starbucks puppuccino was bought as a treat (Picture: Kennedy News and Media)

It admitted that dog biscuits are not usually provided, bit it claimed staff asked Megan if her dog would like them, as they knew her, adding that they were placed on top of the treat.

Bonio manufacturer Purina said the health and wellbeing of pets is its ‘number one priority’ and that it does not supply dog biscuits to restaurants and cafés.

Telling how she wasn’t sure if she’d ever get over Bonnie’s death, Megan said: ‘She was just so funny and lovely and had a really big personality.

‘I had to hand-rear her myself when she was newborn. She looked to me as mum, I did everything for her.’

Explaining how she’s had puppuccinos before, she added: ‘I’d go to Starbucks with just Bonnie and it used to be a thing that me and her did as a treat. This was the first time it had a biscuit with it.’ 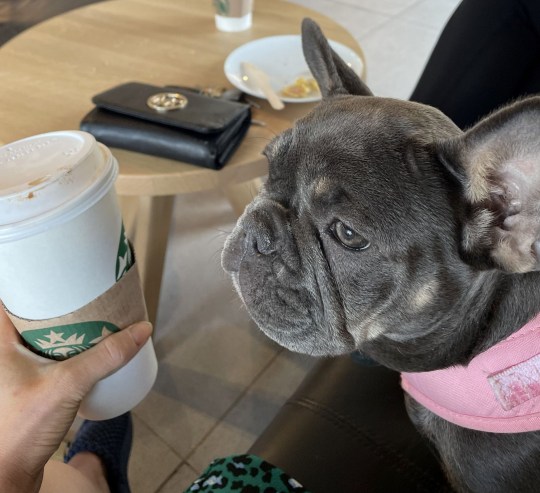 Megan said she wants other dog owners to be aware of the risks of their pooches choking on biscuits (Picture: Kennedy News and Media)

Bonnie was in the kitchen while she demolished the creamy treat, while her owner was in the open-plan living room.

Megan added: ‘She had the puppuccino, ate the biscuit, went to go and get a drink of water and then she lay in her bed and obviously that’s when she died, she choked but it was silent.

‘My partner’s brother was the one that found her, obviously I then went to her and just dropped on the floor when I saw her. I didn’t know what to do.’

After Bonnie died, Megan contacted Starbucks to tell them what had happened but she wasn’t impressed with the coffee giant’s response.

‘I’ve spoken to Starbucks and to be honest, I’m absolutely disgusted with them.

‘That’s all they seemed bothered about and it angered me so much.’ 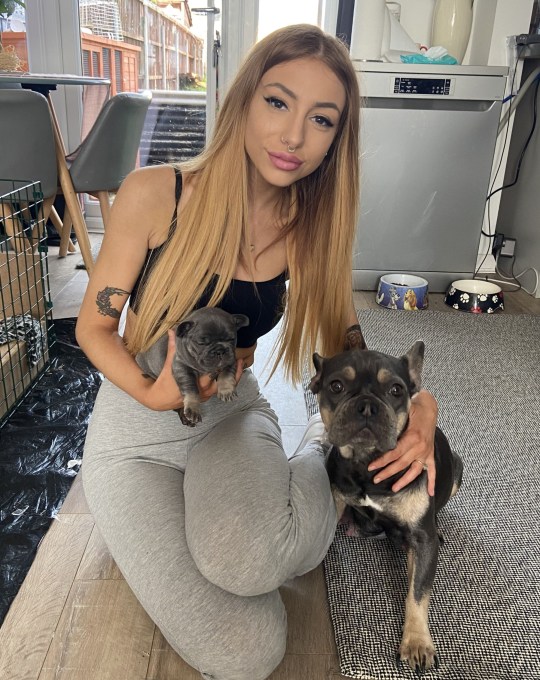 Megan holding Bonnie in her hand and with Billy her other dog sitting next to her (Picture: Kennedy News and Media)

Megan said she was offered a £250 gift card to spend in-store, but feels she wasn’t given a sincere apology.

She added: ‘When I lost her my mental health just plummeted. I tried telling Starbucks this but all they offered me was a £250 gift card and I’m not being funny but she’s worth more than £250 worth of coffee.

A Starbucks spokesman said: ‘Our partners (employees) are really upset to hear about the customer’s loss, the customer and her dogs are known and well-loved in our store.

‘Puppuccinos are not an official item on the Starbucks UK menu. If customers request the item we have a ‘make every moment right’ policy and offer them free of charge.’

A Purina spokesperson said: ‘We would like to pass on our sincere condolences to the owners of the puppy.

‘We know that the loss of a pet in any circumstances is heartbreaking and the health and wellbeing of pets is our number one priority.

‘We don’t supply dog biscuits to restaurants and cafés and we would not recommend serving treats to pets in a way that leaves owners unable to see the feeding guidelines on pack.

‘This guidance indicates to the owner whether a snack is safe and appropriate for their individual pet.’

What does it take to become a life-saving Medical Detection Dog?