Britain’s busiest motorway has had even more action than expected this week, as climate change activists have blocked it for the second time in three days.

Protesters from Insulate Britain blocked the M25 from junctions 8 and 9, as well as junction 23 from 7am.

As a result, there have been queues for miles, with videos from the scene capturing angry motorists who have been impacted by the delays.

Here’s all we know about Insulate Britain and why they’re demonstrating.

Who are Insulate Britain?

Insulate Britain are an off-shoot of the climate change group, Extinction Rebellion.

Launched in August, their activism is focused on making the Government better insulate properties and reduce emissions.

According to their campaign site, the group demands the Government to fully fund and take responsibility for the insulation of all social housing in Britain by 2025.

On Monday, the group made their first demonstration on the M25, blocking off several junctions from 8am until around noon. At least 77 protesters were arrested as a result, with an additional 15 on Wednesday.

Delays were reported at junction three, the Swanley interchange in Kent, junction six, the Godstone Interchange in Surrey, 14 for Heathrow airport, 20 for Kings Langley in Hertfordshire and 31 for Purfleet in Essex. 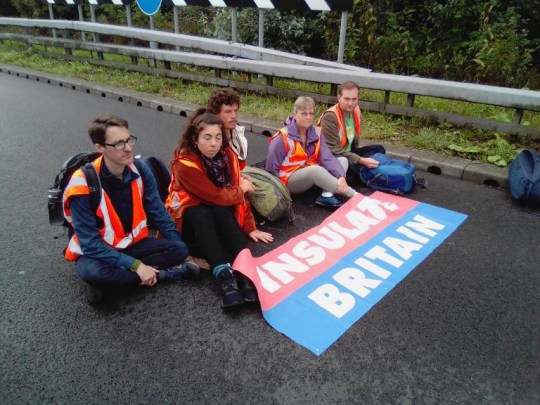 What is Extinction Rebellion?

Extinction Rebellion, or XR, was launched by Roger Hallam and Gail Bradbrook, along with other activists from the campaign group Rising Up! in May 2018.

With many members around the world, it is a global movement that has stated an aim of ‘using nonviolent civil disobedience to compel government action to avoid tipping points in the climate system’.

Often, their demonstrations make splashes in the media for the scale and level of disruption, drawing more attention to their messages. 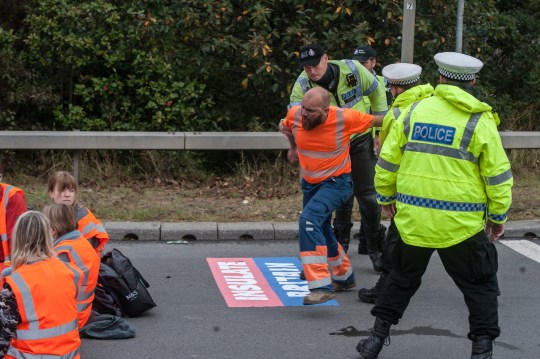 At least 15 arrests of Insulate Britain protesters were made on Wednesday – an angry, delayed motorist had to be restrained by police (Picture: Getty Images)

Why did Insulate Britain block the M25?

The group, who say 89 activists were involved on Wednesday, tweeted: ‘#InsulateBritain are back. Boris Johnson can you hear us yet? #getonwiththejob’.

Through the disruption of a major motorway, Insulate Britain is attempting to draw attention to the scale of the climate crisis. the campaign is calling on the Government to better insulate properties and reduce emissions.

‘Proper jobs for hundreds of thousands of people to start the first real step – to insulate all the homes of this country – which pound for pound gives us the biggest reduction in carbon emissions.

‘It is a total no-brainer and yet this Government refuses to get on with the job. This is criminal negligence.’

However, some have branded their actions dangerous and has drawn heavy criticism from motorists, including lorry drivers with obligations to deliver goods.

One wrote on Twitter: ‘People blocking the M25 or any other motorway should be immediately removed not allowed to sit there causing chaos. People are on the motorway for a reason nurses, doctors, lorries full of food etc. It is a stupid and dangerous way to protest.’

What is The Activist on CBS and why is it trending?