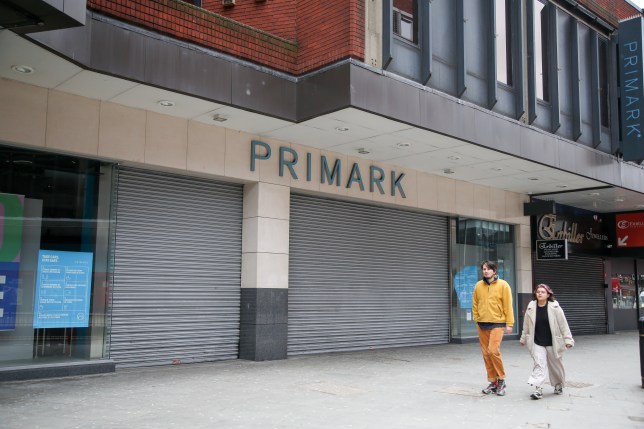 Primark’s owners say they expect a strong boost as their shops reopen from April 12 (Picture: Getty)

Primark’s owners believe they will have lost out on sales of £1.1 billion as a result of the increased Covid-19 restrictions and lockdowns of the past six months.

Associated British Foods (ABF) said it expects to take a further £480 million hit to sales in the second half of its financial year – March to August – but expects a strong boost once stores can reopen and pent-up demand is met.

They have said they are looking at ‘all options’ including the prospect of opening for longer when most of its stores reopen in England on April 12.

The company added that, despite the heavy falls, sales at Primark in the six months to February 27 are still expected to come in at £2.2 billion, as some stores remain open overseas and taking into account sales periods before the new restrictions were introduced.

But this is well down on the £3.7 billion in the same period a year earlier, prior to the global pandemic.

Just 77 stores are currently open – representing 22% of total store selling space – primarily in the US.

Bosses said they expect to be ‘highly cash-generative’ when stores can finally reopen, with 83% of floor space able to welcome customers by April 26, based on current estimates and government announcements in different countries.

ABF said it has saved money through cost-cutting measures to mitigate the falling sales and still has spring and summer stock from a year ago that could not be sold due to the pandemic, which will go into stores when they reopen.

Later in the year, stores will also be able to rely on the autumn and winter collections from last year.

It added that, when stores were open, trading continued to be strong, with sales up 15% on a like-for-like basis compared with last year.

However, the number of customers when stores could open was down and trading hours restricted.

It added: ‘Performance has varied by store, reflecting the prevailing circumstances of our customers including home working, less commuting and very little tourism.

‘Like-for-like sales at our stores in retail parks were higher than a year ago, shopping centre and regional high street stores were lower than last year, and large destination city centre stores, which are heavily reliant on tourism and commuters, continue to see a significant decline in footfall.’

Based on the recent announcements by the UK Government, bosses said they expect to reopen 153 stores in England on April 12, and it is hoped a further 20 in Scotland can open by the end of April.

ABF’s other divisions in grocery, sugar, agriculture and ingredients are expected to see revenues and profits ahead of expectations, the company added.