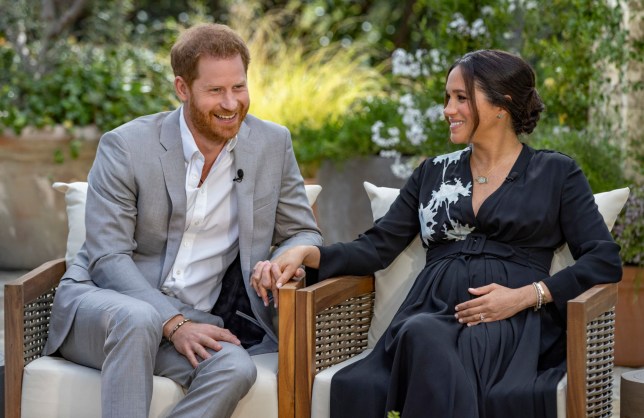 Prince Harry and Meghan chatted about expecting their second child during their interview with Oprah Winfrey on the CBS Television Network. (Picture: Joe Pugliese/Harpo Productions via AP)

Meghan Markle and Prince Harry chose Valentine’s Day to announce they are expecting their second child with a sweet photo snapped in their garden in LA.

A spokesperson for the couple confirmed the happy news saying in a statement: ‘We can confirm that Archie is going to be a big brother. The Duke and Duchess of Sussex are overjoyed to be expecting their second child.’

The couple then chose their exclusive sit down with Oprah Winfrey as the moment to announce more special news about the latest addition to their family – Harry and Meghan are expecting a baby girl.

The surprise gender reveal came as Harry joined Meghan and Oprah towards the end of the bombshell interview, during which a number of explosive revelations were made about the royal family and the couple’s choice to step back as senior royals.

Focusing on happier news, Harry revealed: ‘It’s a girl.’ He added the news was ‘amazing,’ and said he was: ‘just grateful, to have any child, any one or any two.

‘To have a boy and then a girl, what more can you ask for,’ Harry said.

When is Prince Harry and Meghan Marke’s baby due?

The Duke and Duchess Of Sussex have not shared the exact due date for their baby girl, but Meghan confirmed during their interview with Oprah that they expect to welcome the latest addition to their family this summer.

It had been speculated that if Meghan and Harry waited until at least their 12-week pregnancy scan to announce their happy news publicly, that would mean Meghan could be due to give birth in late summer.

However, most expectant parents have to wait until about 18 to 20 weeks along to find out if they are having a boy or a girl.

For Harry and Meghan to have confirmed their baby’s gender when they filmed their interview with Oprah back in February, the Duchess would have been at least 5 months along. This would mean their baby’s due date is more likely to be in early summer.

The couple, who have a one-year-old son called Archie, told Oprah during their CBS interview that once they have welcomed their baby girl they are ‘done’ and do not plan to have any more children.