TRAGEDY struck 25 years ago when 16 children and their teacher were fatally shot after a gunman stormed a primary school in Scotland.

That day will never be forgotten and forced laws to be changed in gun control. 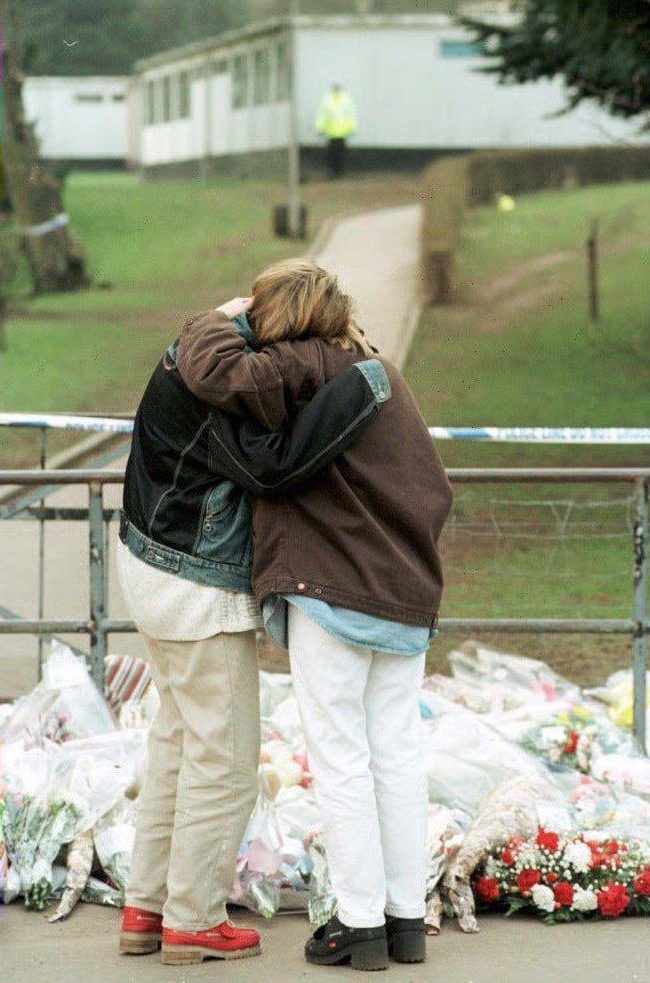 Two girls share a moment of grief outside the Dunblane Primary School in 1996Credit: PA:Press Association

When did the Dunblane shooting happen?

On March 13, 1996, a gunman broke into a primary school in the small Scottish town of Dunblane and killed 16 young children and their teacher before turning the gun on himself.

The murderer was named as Thomas Hamilton, a resident of the small town.

On the day of the killings, he drove into the car park at 9.30am and proceeded to cut cables on a telephone pole. 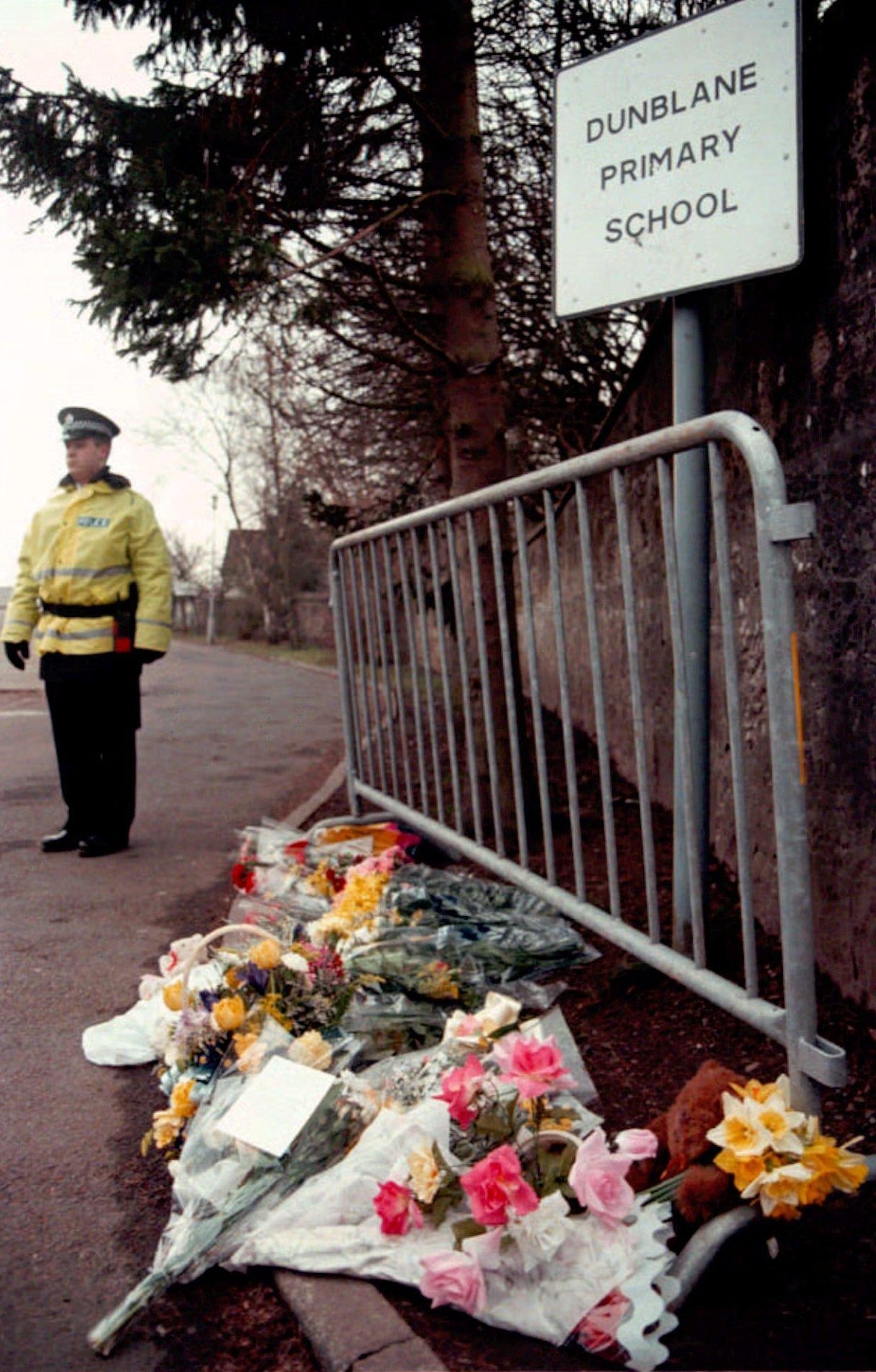 Flowers laid at the entrance to Dunblane Primary School the morning after the massacreCredit: AP:Associated Press

He then entered the school carrying four handguns and 743 rounds of ammunition.

Hamilton entered the school gym, where Year 1 students had just arrived for a PE class with their teacher Gwen Mayor.

He immediately opened fire, killing Mayor instantly and wounding two other teachers who were present in the gym.

While most children were dragged into a store cupboard for safety by their teachers, Hamilton fired 16 shots at point-blank range at a group of children who had been injured by his previous shots. 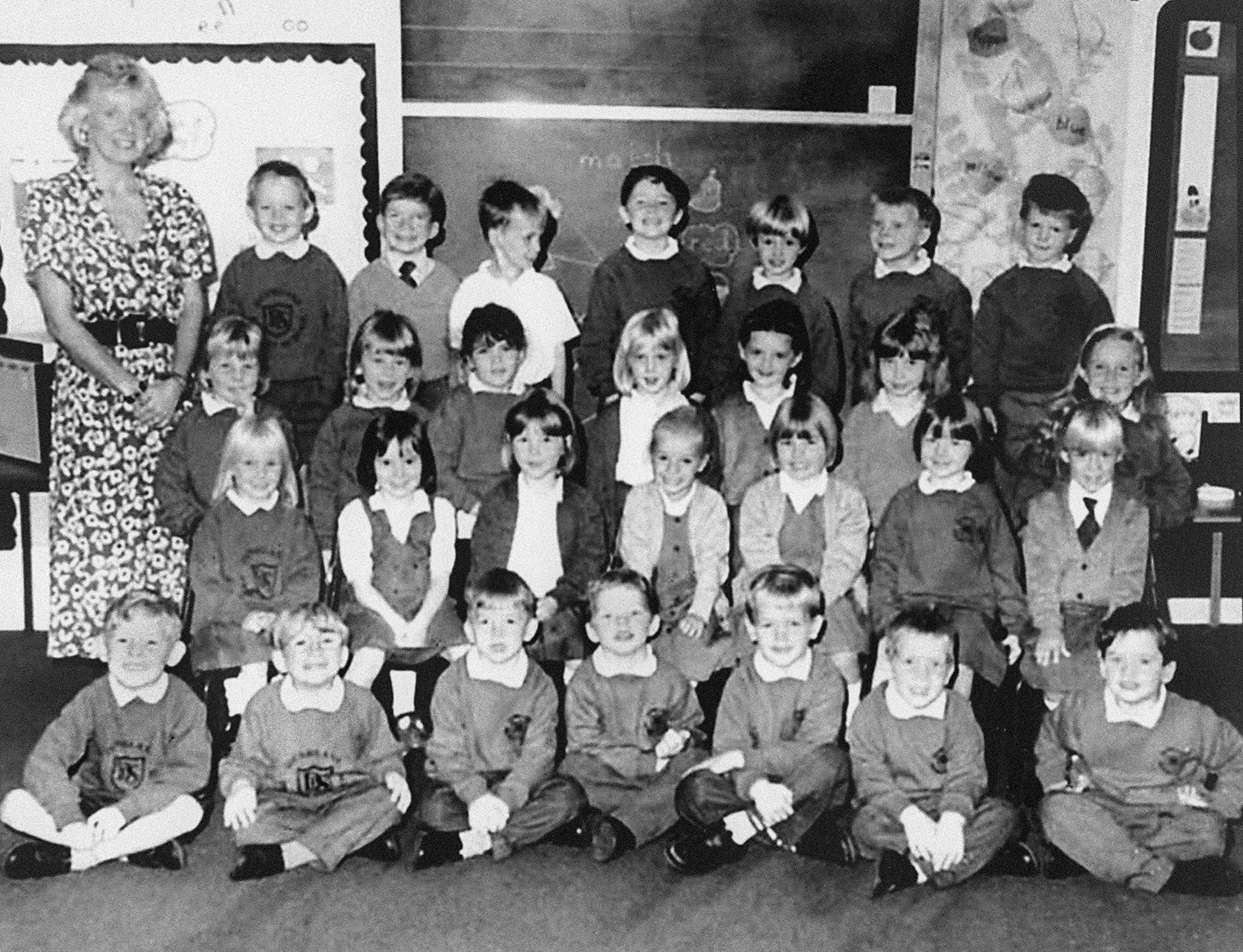 Of them, 15 died instantly, while one child died later en route to the hospital.

Hamilton briefly left the gym, but continued firing shots towards the library and a mobile classroom.

He then re-entered the gym, before dropping the gun he had been using and choosing another one.

Hamilton put the barrel of the gun in his mouth, pointed it upwards, and pulled the trigger, killing himself.

The entire attack lasted no more than five minutes. 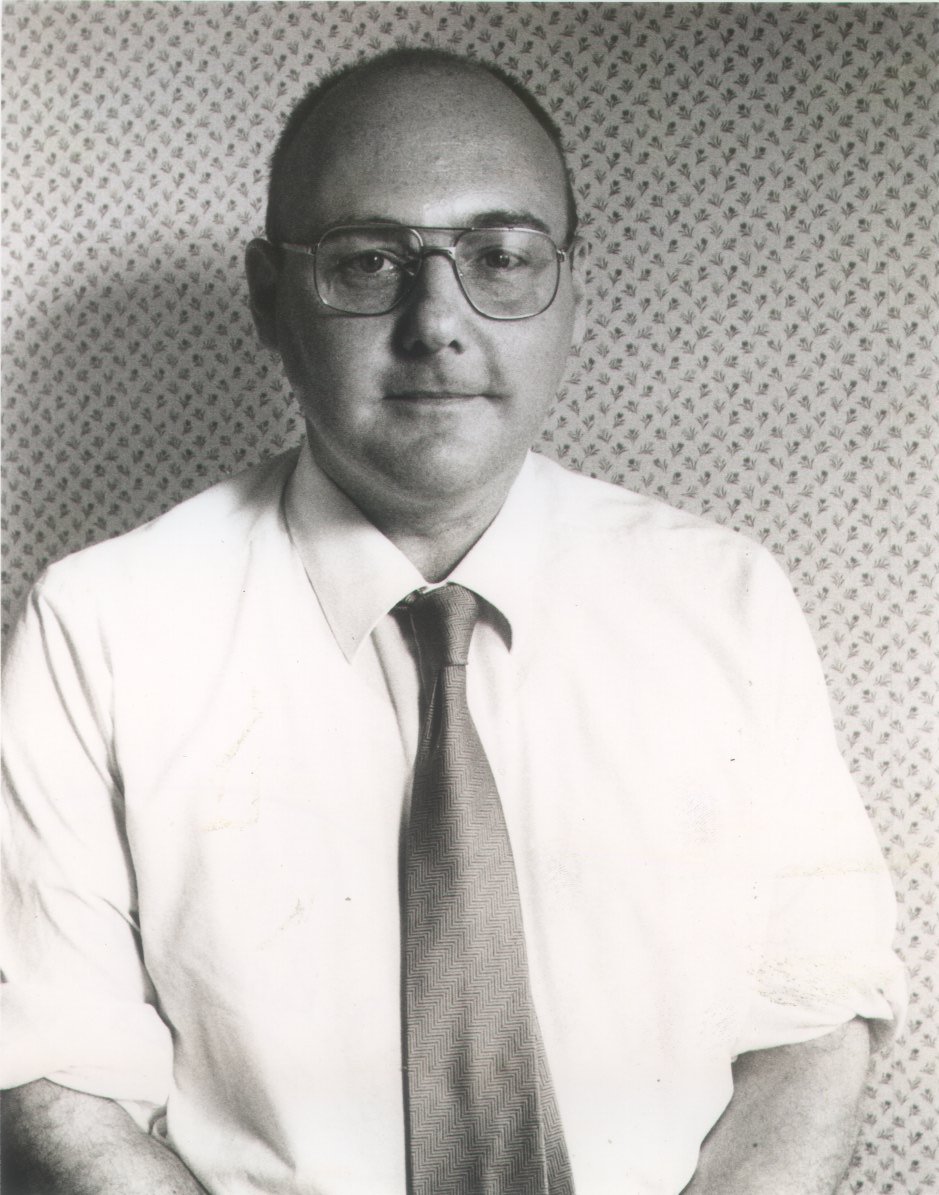 Who was the gunman?

Murderer Thomas Watt Hamilton was born on May 10, 1952, in Glasgow, Scotland.

His mother, a hotel chambermaid, was divorced from his father by the time Hamilton was born.

Hamilton never knew his father and grew up with his mother’s adoptive parents, believing they were his biological parents.

They legally adopted him at age 2.

He also thought his biological mother was his sister until he was told the truth when he was 22 years old.

Hamilton had become an assistant Boy Scout leader at the age of 20 but soon came under suspicion because of his behaviour toward boys.

After a number of complaints, he was forced to leave – a move which angered  him. 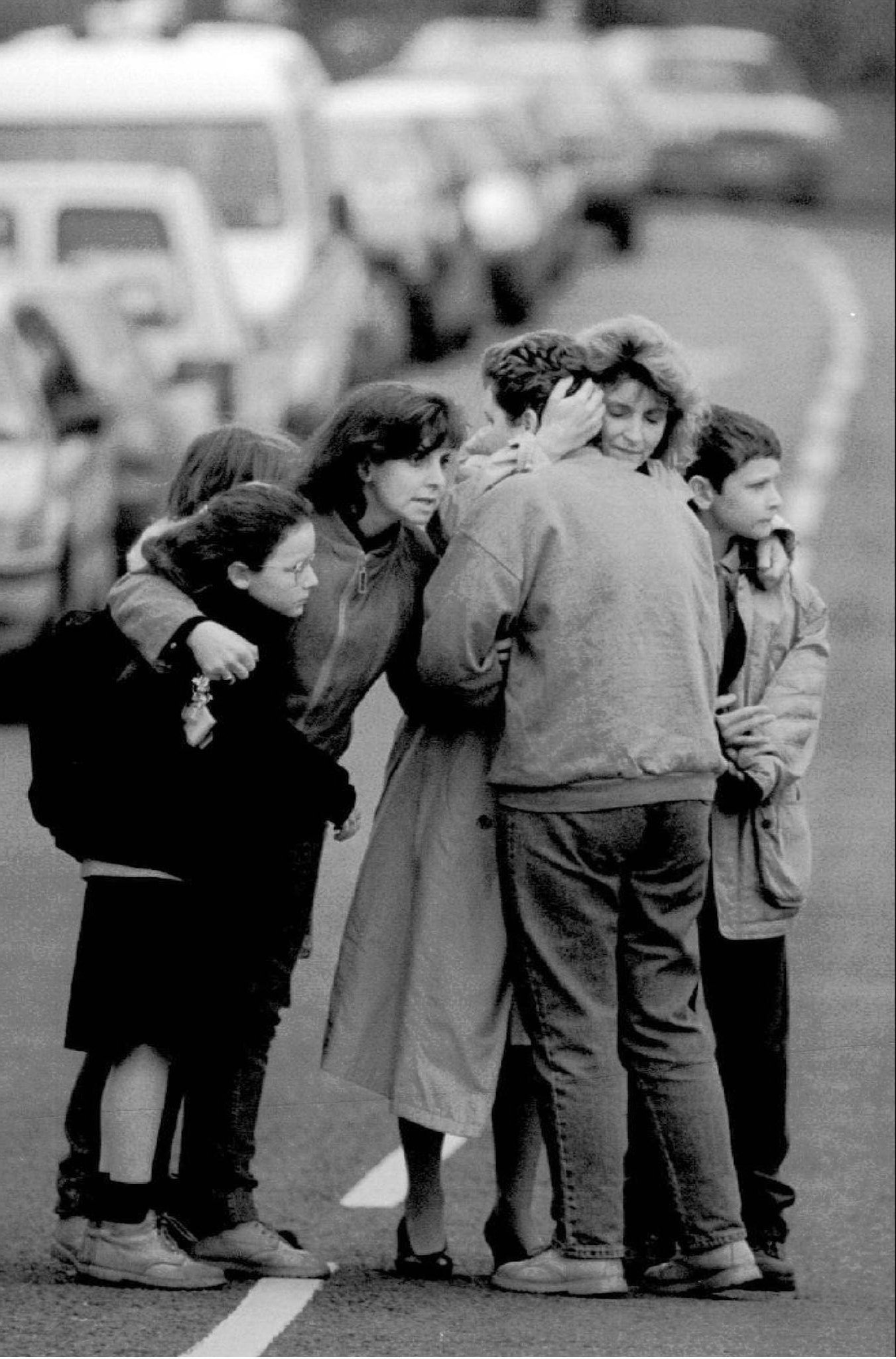 Survivors flee the school after the shootingCredit: Reuters

He repeatedly asked to be allowed to return, to no avail, and he wrote letters of protest to various government authorities, claiming persecution.

In the meantime, he became a gun collector, and he organised several boys’ clubs, in which he taught shooting, gymnastics, and sports.

Though his clubs were initially popular and well-attended, his reportedly strange behaviour eventually alienated club members and their parents, and the clubs were forced to shut down.

Hamilton was often described as an obsessive misfit who bottled up his paranoid resentment and was nicknamed Mr Creepy by others in the town of Dunblane. 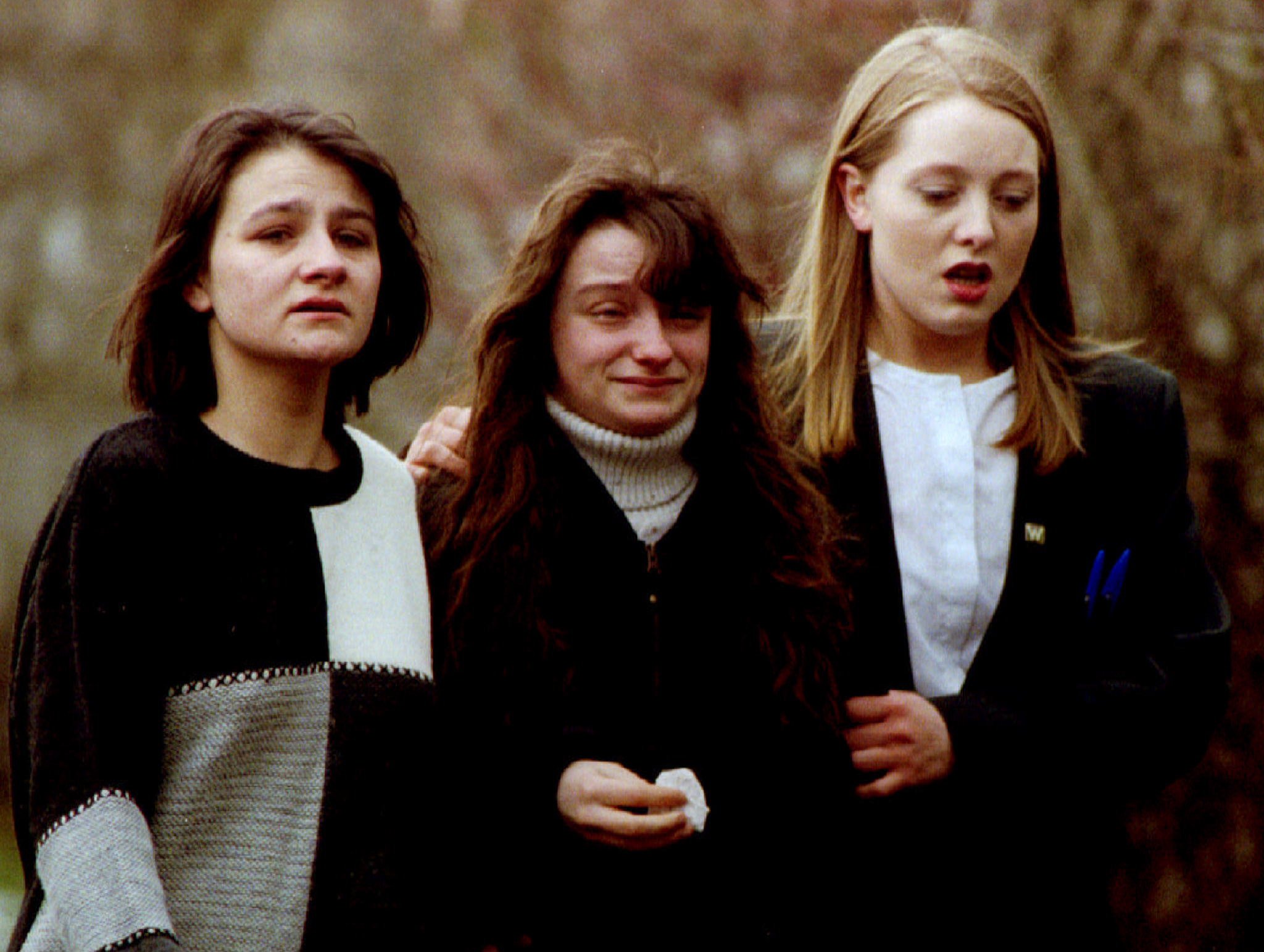 Families wait for news outside the schoolCredit: Reuters

Who were the massacre survivors?

Many children of Dunblane primary school still bear the physical and mental scars of the ordeal, although a number have chosen to move away from the town.

Headteacher at the time, Ron Taylor has kept newspaper cutting and files in a box under his stairs.

Among the items is a painstakingly hand-written account of the events of March 13, 1996, where he describes how he tried in vain to save the lives of his dying students.

5-year-old Mathew Birnie, who is now 30 years old, was shot at twice, but one of the bullets only missed his heart because it was deflected by one of his ribs.

The most famous survivor of the massacre is tennis champion Andy Murray, who was a pupil at the school with his brother Jamie.

Andy had been walking to the gym when the shootings had begun, narrowly avoiding being caught up in the tragedy.

He has previously said the terrifying incident had affected him deeply, but hoped his triumphs on the tennis court had had a positive influence on the town.

His mother Judy said the family knew Hamilton, a 43-year-old unemployed former shopkeeper, and had even given him lifts in their car.

She said she still found it difficult visiting the school and purposely avoided the gym where the shootings took place.

Andy Murray in tears over Dunblane

We pay for your stories! Do you have a story for The Sun Online news team? Email us at [email protected] or call 0207 782 4368. We pay for videos too. Click here to upload yours.