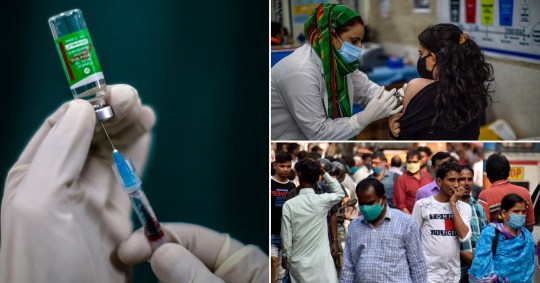 How is this variant different from the others and do we need to be worried? (Picture: Getty Images)

Prime minister Boris Johnson has cancelled his trip to India, with the country being added to the UK’s ‘red list’ of restricted destinations. Covid-19 cases in India are rising sharply and a specific variant of the virus — B1617 — is becoming increasingly common there.

B1617 has also been found outside of India, including in the UK. Cases in Britain appear to be doubling each week: there are currently 182 in the UK (as of yesterday), up from 77 the week before. Right now the variant is ‘under investigation’, but unlike the Kent (B117), South African (1351) and Brazilian (P1) variants hasn’t been designated a ‘variant of concern’.

Does this mean this variant is different from the others and we need not be worried? Here’s what we know about its effects so far.

Is this variant more infectious?

We think this variant may be able to spread more easily than earlier forms of the virus. This is because of a mutation it carries called L452R, which affects the virus’s spike protein. This is the ‘key’ the coronavirus uses to unlock our cells.

The L452R mutation changes the part of the spike protein that directly interacts with ACE2, the molecule on the surface of our cells that the virus binds with to get inside. Early research — yet to be reviewed by other scientists — suggests the L452R mutation allows the virus to bind to cells more stably. In previous variants, such as the Kent variant, mutations like this that enhanced the virus’s binding ability resulted in it becoming more infectious.

The B1427 variant detected in California contains the same L452R mutation a B1617. It is estimated to be around 20 per cent more transmissible than the earlier form of the coronavirus that was circulating during the first wave. 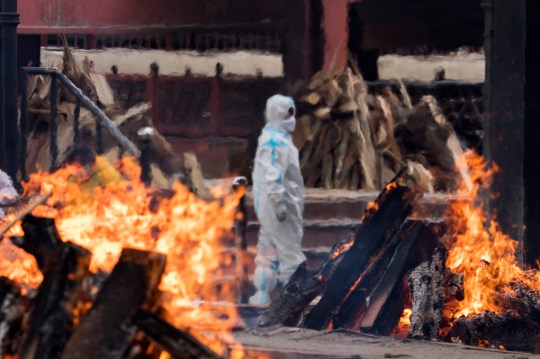 A man wearing PPE performs the last rites to his relative who died of Covid-19 at a crematorium in New Delhi (Picture: Getty Images)

And is it more dangerous?

Mutations such as L452R that help with binding don’t necessarily result in more severe disease or make the virus more deadly. For example, while the B1427 variant appears to spread more easily, preliminary research didn’t find that it was associated with more severe infections or higher viral loads. The same could apply to B1617, though this still needs to be investigated.

But a particular concern is the impact B1617 may have on vaccine efficacy. The vast majority of vaccines developed against the coronavirus are based on targeting the spike protein. As the protein is on the outer surface of the virus, this is what your immune system will predominantly ‘see’ during an infection and therefore make effective antibodies against. If mutations change the spike protein’s shape, then these antibodies may become less effective.

Indeed, preliminary studies suggest the L452R mutation could help the virus evade the immune system. On top of this, B1617 carries a second mutation, called E484Q, that changes the spike protein as well. Research suggests that mutations like it (that affect the same area of the spike protein) may also make the virus less susceptible to pre-existing antibodies. 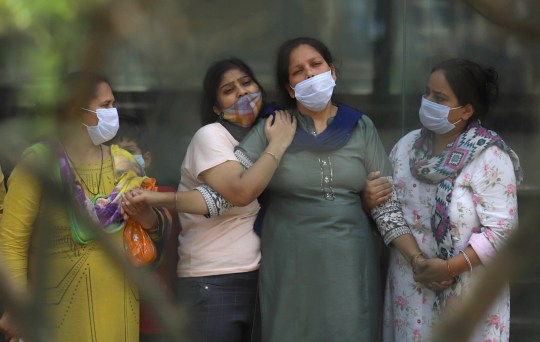 Women mourn during cremation of a person at the Nigambodh Ghat crematorium (Picture: PA)

Early, unreviewed studies of these mutations’ effects in B1617 suggest that they do make the variant less susceptible to antibodies generated previously. However, it is important to stress that these findings have only been shown in laboratory experiments and not in actual people.

How worried should we be?

The Indian health ministry has stated that the country’s rise in cases is not linked to these mutations, as B1617’s mutations haven’t been detected in high enough quantities to determine whether it is directly responsible. However, this may be due to lack of data, and many experts have stressed the importance of increasing virus sequencing to get a better picture.

It’s still too early to tell if this variant will pose a significant threat to efforts to control the virus. However, as always with public health, prevention is better than a cure. Hence, we should continue our efforts to control the virus, both in terms of regulations — masks, social distancing and so on — as well as vaccination, mass testing and genome sequencing. By continuing to combat the virus in general, we can restrict any impact this variant has.

The biggest cause for concern would be if B1617 undermined vaccination efforts. If this variant is able to cause disease in vaccinated individuals, it poses the risk of creating large-scale outbreaks around the world in the future.

Work to create booster vaccinations to deal with current and future variants is already under way, but it is too early to say whether they will be needed to control B1617 specifically.

However, a more effective way to prevent variants causing issues around the world would be to prevent them from spreading in the first place. Strict travel restrictions, such as those seen in New Zealand and Australia, may seem a burden, but have allowed relative normality to return in these countries with little fear of variants disrupting efforts to get back to normal. It’s with this hope that the UK has added India to its red list — essentially banning travel from the country.

■ Click here to read the original article on The Conversation