Jeremy Hunt is currently the UK’s chancellor of the exchequer, the fourth person to hold the role this year. (Picture: Dan Kitwood/Getty Images)

Upon assuming office, new Prime Minister Rishi Sunak was tasked with appointing his cabinet – during which he reaffirmed Liz Truss’ Chancellor of the Exchequer, Jeremy Hunt.

Mr Hunt is in charge of the public purse and is due to present his Autumn Statement today (November 17) which could see both tax rises and spending cuts, in what the Chancellor has described as ‘decisions of eye-watering difficulty’.

While that’s no small feat at the best of times, it’s an especially challenging job given the economic woes of late and the soaring cost of living battering Britons’ bank accounts.

So, what exactly does the Chancellor’s job entail?

The Chancellor of the Exchequer – often shortened to just ‘Chancellor’ – is a senior government role. 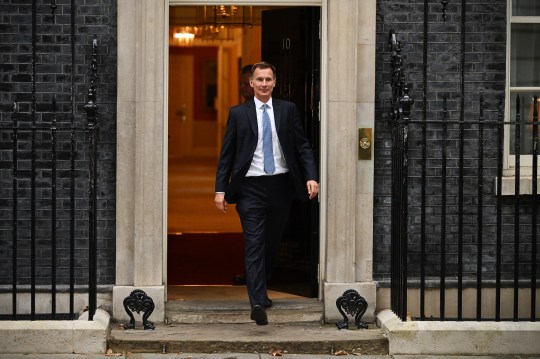 In a nutshell, the government website explains the Chancellor is ‘responsible for raising revenue through taxation or borrowing and for controlling public spending.

‘He has overall responsibility for the work of the Treasury.’

Chancellors also lead the Treasury’s response to crises such as the cost of living and Covid-19, something we saw Mr Hunt’s predecessor Mr Sunak do a fair bit of.

In addition to the Budget, Mr Sunak created the furlough scheme, which was designed to stave off millions of job losses during lockdown – as well as the ‘Eat Out To Help Out’ scheme.

Most recently, we saw Mr Kwarteng deliver a stamp duty holiday, promise a range of income tax cuts for April 2023 (which were later reversed), and confirm a two-year freeze on the soaring energy price cap (which will now end in April 2023).

Mr Kwarteng also spoke about the creation of ‘low tax investment zones’ in parts of England, including the Tees Valley, Derbyshire and Essex, among others elsewhere in the UK.

Mr Hunt will set out the government’s new fiscal priorities in the upcoming Autumn Statement.

Who else has been Chancellor?

Many other famous politicians have held the role of Chancellor in the past, with some former Chancellors going on to become Prime Minister.

In the 20th century, Winston Churchill, Neville Chamberlain, Hugh Gaitskell, Harold Macmillan, James Callaghan, John Major, and Kenneth Clarke were just some of the notable politicians to have held the job.