In the race to wean the world off its addiction to fossil fuels, some countries are doing better than others.

Despite Britain’s recent political strife and its historic love affair with coal, the country is doing surprisingly well: by many accounts, it has one of the fastest rates of decarbonisation globally.

In the 7 year period between 2012 and 2019, the UK reduced its use of carbon-intensive coal power from 41% to just 2%, a near unparalleled decline.

Yet there is still a mammoth task ahead, with the upward trajectory of global carbon emissions barely being dented by a pandemic-induced travel freeze.

But by looking at the UK, both past, present and future, a blueprint for the rest of the world begins to emerge. 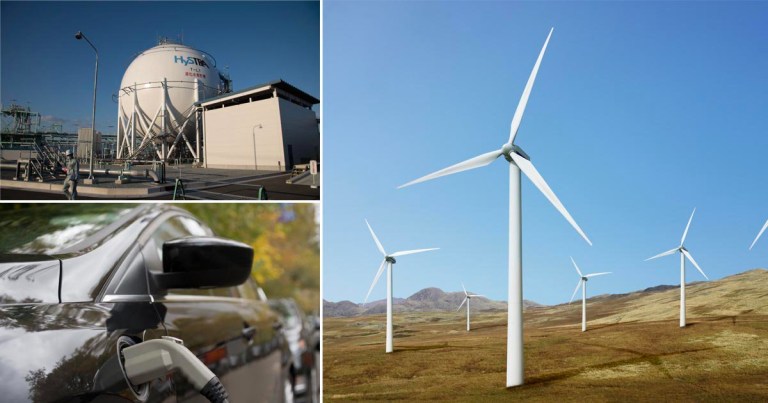 The UK’s energy future will be a combination of renewable sources, storage solutions and green technologies (Photo: Getty)

‘If we look at this on a global basis, the UK has got a number of really quite impressive advantages when it comes to the energy transition,’ says Kingsmill Bond, energy strategist at thinktank Carbon Tracker.

‘The first of them, sort of bizarrely, is actually political.’

In 2008, the government started the Climate Change Committee (CCC), a non-governmental body that has the sole purpose of decarbonising the UK economy.

Though some have criticised the group as being too conservative in their aims, the single mindedness of the CCC’s brief, insulated from the changing goals of successive governments, has helped to keep the UK on track to meet its targets.

With time running out to stay below the 2 degree warming goal set by the Paris Climate Agreement, the CCC is also useful in ratcheting up pressure on the government to go faster and further than it’s currently doing.

On Tuesday, the CCC announced a raft of new climate goals, aiming to cut carbon emissions by 78% by 2035.

This comes as Britain prepares to host the 26th international climate change conference, COP26, later this year, in Glasgow, where the world’s attention will turn to the vast challenges ahead.

Yet it’s not just political will that has helped Britain lead on decarbonising – some countries are blessed with natural resources, too. 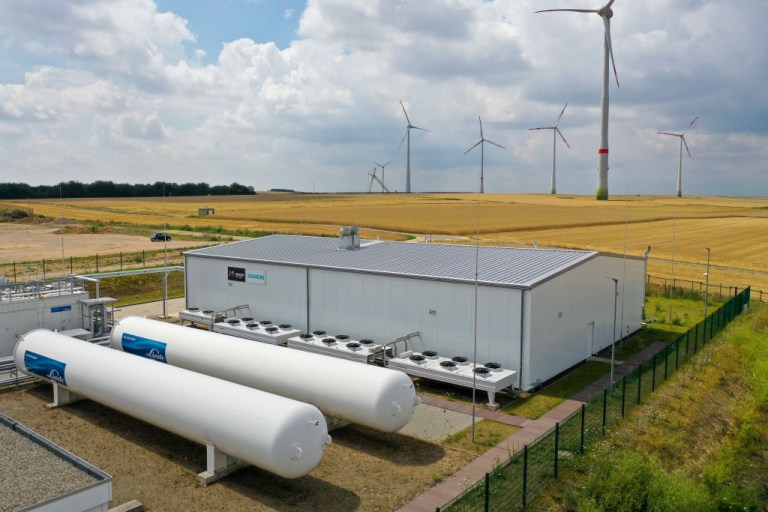 Hydrogen electrolysis plants like this one in Mainz, Germany, tend to be near power sources to provide the energy for separating hydrogen from water (Credits: Bloomberg via Getty Images)

‘We’re extremely lucky in this country, because we have potential large scale hydrogen storage facilities, in salt caverns, underneath large parts of the north of England,’ says climate change expert Chris Goodall.

‘That, combined with the best offshore wind in the world, means that the UK does have an energy future which is entirely fossil free.

‘We can turn the whole economy into a powerhouse of energy and low carbon energy partly by electrification but also partly by using hydrogen.’

Some observers are especially excited about ‘green hydrogen’ as a way to beat nature’s fickleness: how do you keep the electricity flowing when the sun stops shining or the wind slows?

Scientists have long known that water can be separated into its constituent parts: hydrogen and oxygen – you just need energy to do so.

Once the hydrogen has been extracted, it can be stored – and it’s incredibly energy dense, packing three times more energy than the equivalent volume of diesel or petrol.

‘The UK is falling behind and not realising just how important it is to have a storage medium that is potentially vast in scale,’ says Goodall.

‘[We need] something which can deal with the week long lulls that we see in the UK, or the monsoon periods in tropical places where you don’t see much sun.’

While some look towards battery tech for long-term energy storage, the potential for hydrogen to provide a constant, clean source of energy to call on whenever we need it could be huge.

‘When you look at energy storage, batteries are great for storing energy of timescales of milliseconds within a day, but they’re not much use in terms of shifting energy between days, weeks or seasons,’ says Dr Simon Evans, deputy editor at climate publication Carbon Brief.

‘Hydrogen is appealing because you can convert electricity into hydrogen and, because it’s a gas rather than electrons flowing around a circuit, is much more amenable to being stored over longer periods.

‘You can stick it in a tank or you can store it in a hole in the ground like we do with natural gas.

But some see a more limited role for hydrogen in the final green energy system of the UK.

‘Hydrogen is the champagne of the energy system,’ says Bond.

‘It’s nice to have, but it’s rather expensive, so it will be used in areas where you can’t satisfy your desires with with water or wine – it will only be used for the more complex areas.’

However, on a global footing, hydrogen could still play a key role in the climate battle.

By 2050, when renewable electricity costs will have fallen precipitously, the International Energy Agency predicts that hydrogen could provide over 10% of global energy needs, producing more than 11 million gigawatt-hours of energy per year.

For now, though, the UK’s real push appears to be in electric cars and wind energy. 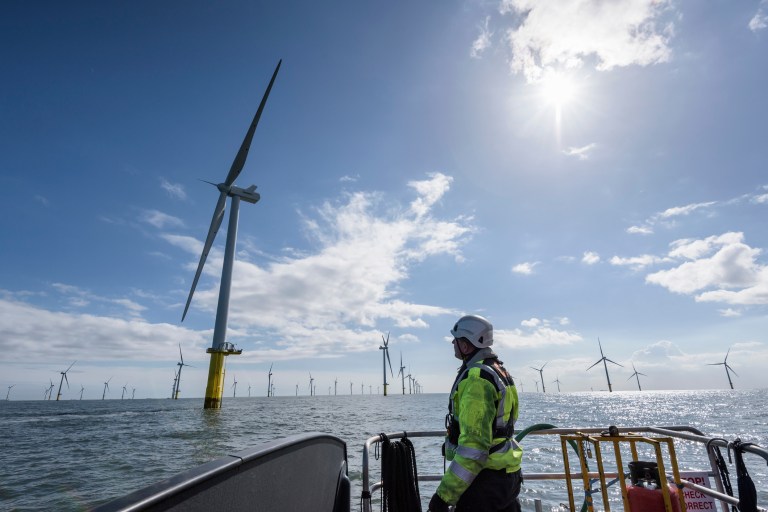 Over Easter weekend this year, wind power accounted for 39% of the total UK energy supply – a marked change from a decade ago, when the total wind power capacity was just a quarter of what it is currently, and much more expensive.

Solar, too, now offers the ‘cheapest electricity in history’, according to the International Energy Agency’s annual climate report, and makes up around 4% of the UK’s total yearly energy supply.

Combine that with a vast drop in demand for electricity thanks to more efficient appliances, better light bulbs and a move away from heavy industry, and a picture begins to emerge for how countries could begin to tackle their own carbon addictions.

To put it simply, ‘you decarbonise the electricity system, you electrify the easy stuff, and then you tackle the hard stuff,’ says Bond.

It’s this next period, the hard stuff, that is slightly more murky than the progress made so far.

‘Almost all the progress in cutting UK emissions over the last decade has come in the power sector,’ says Simon Evans of Carbon Brief.

‘We won’t get to net zero if we only focus on the power sector. Transport, heat, industry, agriculture, land use – all of those need to be addressed.’

As green energy becomes even cheaper over the next decade, and the power system winds down its fossil fuel use, the spread of green technologies and innovation to other sectors will be rapid.

‘We’re in the process of decline, where fossil fuels are being pushed out of the system in one sector after another,’ says Bond.

‘It will happen in different areas at different times, but I think we can say with a degree of clarity that fossil fuels will be pushed out of the electricity sector in the UK, largely during the course of this decade, and that new car sales will be electric, largely, by the end of this decade too.’ 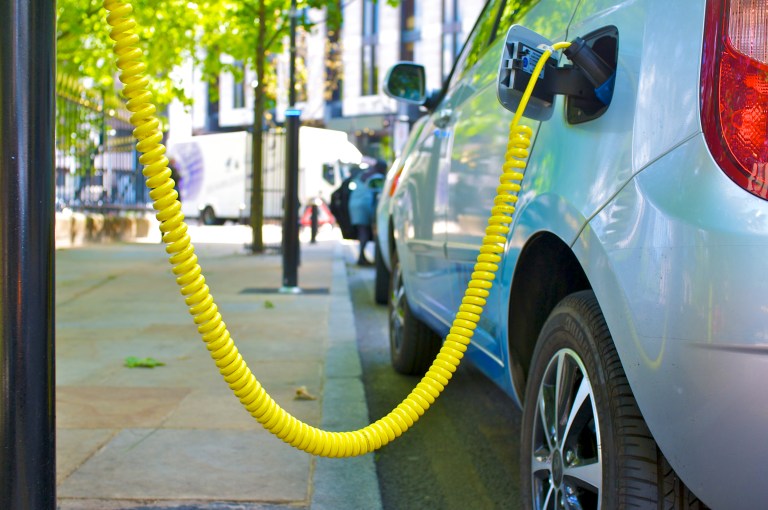 Combustion engines will no longer be sold in the UK from 2030. (Credits: Getty Images)

But there are still fears that, despite the rapid and excellent progress, we fall short. What if we don’t achieve our climate goals, and renewables don’t quite cut it?

Apart from untold environmental destruction and misery, some have touted the use of Direct Air Capture (DAC), a process of passing the air we breathe through vast processing plants, taking out the carbon and putting it into fuels or the ground.

If we have to resort to this solution, the sight of vast DAC plants dotting the motorway could become common.

‘Current models suggest we’re going to need to remove 10 gigatonnes of CO2 per year by 2050, and by the end of the century that number needs to double to 20 gigatonnes per year,’ climate scientist Jane Zelikova told the BBC.

Already, some companies are experimenting with prototypes to see if they can be deployed on a larger scale, with experimental DAC plants set up in Canada and Switzerland.

‘It’s very interesting series of technologies which will help us reach net zero by 2050, probably only by employing it on truly massive scale’ says Goodall. 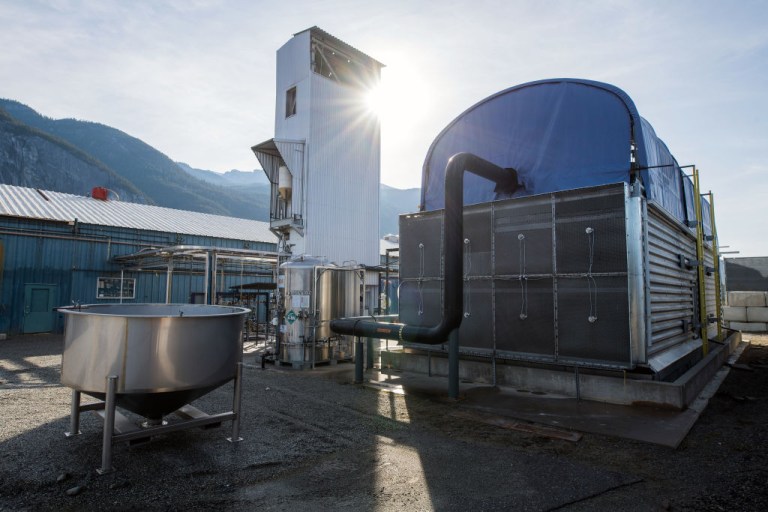 But others are more skeptical about its future use.

‘Direct air capture is a kind of magical technology, which may or may not work, and is incredibly expensive, says Bond.

‘It doesn’t really bear much analysis compared to real technologies like solar, wind and electric vehicles.’

It’s these seemingly simple technologies, solar, wind and batteries, that have existed for decades, that will likely drive the UK’s climate revolution onwards.

[These technologies] are at the cutting edge of technological innovation and development,’ says Bond.

‘It’s fantastic that the UK is doing this stuff, because it’s not just the UK. If we can solve the problems for us here, we can then sell those solutions globally, so there’s a huge industrial advantage if we can do this.’