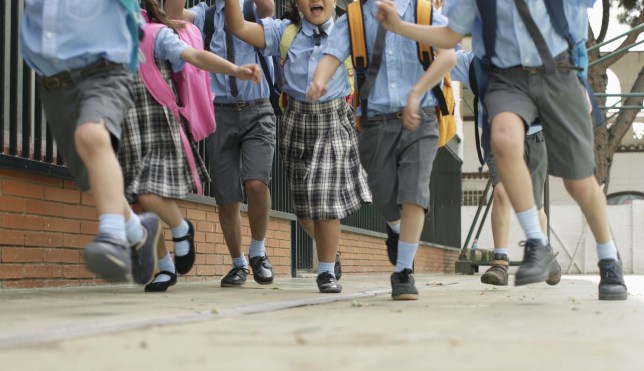 The less we reinforce gendered roles and behaviours, the freer the next generation will be from needless restrictions (Picture: Getty Images/Cultura RF)

At primary school, I was once told I ran ‘like a girl’.

If by this they meant reluctantly and infrequently, they would have been right – but they didn’t. Rooted in misogyny, this sexist phrase suggests that women are not built for exercise – and proving how early this is embedded, it was another child that threw the insult.

Many years later, I was seen crying for a total of three minutes on The Great British Bake Off. Countless tweets were hurled my way telling me that ‘boys shouldn’t cry’ and that I should ‘man up’. This time the insult was thrown at me by adults (predominantly men) who appeared somewhat threatened by my ability to express emotion.

The behaviour we learn in the playground shapes our future. From an extremely young age, our outlook on the world is shaped by what we see and hear in our homes, in the media and in classrooms.

It’s on this basis that a primary school headteacher recently made headlines for discouraging terms such as ‘boys and girls’ and ‘man up’ for children at her school, which also includes a nursery.

Familiar to protests against the school’s LGBTQ+ inclusive curriculum, headteacher Sarah Hewitt-Clarkson said students challenge sexist language like ‘boys don’t cry’, as well as point it out in reading books and worksheets – even rewarding two pupils a week with certificates for doing so.

She suggests terms such as ‘boys and girls’ are replaced with ‘everyone’, and that teachers refrain from language that promotes gendered behaviour. A teacher who told a pupil that ‘boys don’t skip’ was reportedly summoned for a professional conduct meeting following the incident, according to The Times.

The principle rings true: the less we reinforce gendered roles and behaviours, the freer the next generation will be from needless restrictions.

For instance, men learn to police and repress their emotions from a young age, which damages their mental health. Three times as many men as women die by suicide, and statistics show that young men are increasingly likely to die in this way.

At the age of 19, I attended three funerals in nearly as many months for male friends who’d taken their lives.

At school, we typically learn about gender in opposition (for the most part, excluding diverse gender identities). We learn that girls are girls because they are not boys (and vice versa) and attach behaviours to each based on what we see and hear.

Research suggests that this happens much earlier than you might expect. Most children can easily label themselves as either a boy or a girl before their third birthday, quashing the argument that starting inclusive language at nursery is ‘too early’.

It benefits everyone to be freed from the expectations of gendered behaviour. I know this action won’t single-handedly liberate all children, but it is a welcome step forward in a world that is slowly becoming more inclusive.

How can we expect teachers to change if they fear retribution when they slip up?

Much of the outrage regarding Hewitt-Clarkson’s decision declares that children shouldn’t be exposed to ‘the LGBTQ+ agenda’ from such an early age – with many tweets barely disguising their ignorance. They range from those who call it ‘pandering to a minority’ to others who declare it ‘an assault on normal people’.

This argument rests either on the frustrating assumption that our lives are somehow inappropriate for young people, or that they might catch it simply due to exposure.

But this isn’t what the policy means. There is no promotion of LGBTQ+ lives here – instead, there is gentle inclusion. Rather than needlessly gendering a room of children, teachers are encouraged to instead address ‘everyone’ – embracing anybody and everybody – heterosexual, cisgender or otherwise.

Inclusion is not promotion; it is a basic human right. It is not just LGBTQ+ children who suffer from the restrictions of gendered roles and who benefit from inclusion. By using non-gendered terms, teachers can help children be who they are, and who they want to be.

While I am fully behind the principle, I think its execution requires careful thought.

According to The Times, Hewitt-Clarkson said: ‘Girls have posters they hold up every time one of the teachers says, “Come on guys”. The posters say, “Sir, I am not a guy.” Sometimes the teacher still forgets and it slips out, but our training here shows that if you are resolute you can stamp this out.’

This policy is troubling. Rewarding children for monitoring their teachers is not only a bizarre role-reversal but also risks fostering a culture of fear rather than one of inclusion.

As we are so often taught in school, making mistakes is how we grow. How can we expect teachers to change if they fear retribution when they slip up?

There’s a complex balancing act here between language and intention: if we assume that teachers always intend to create an inclusive environment, surely a mistake here and there is OK?

Perhaps, but the way that we convey our intention is through the words that we use – so a balance must be struck.

There is no way around the fact that language matters and that the introduction of inclusive language in schools will have a positive impact on children of all ages – but there has to be a better way of implementing it.

Shaming teachers will leave them reluctant to engage with the programme. In my view, the culture of inclusion that Hewitt-Clarkson aims to create in the classroom needs to be expanded to include the staffroom.

A friendly challenge from a colleague will surely trickle down into their teaching in a much more natural and resilient way than shaming at the hands of their pupils. We all feel defensive when we’re corrected, but if we’re approached with support and understanding, we’re more likely to make the leap.

The best outcome for this change is that it becomes so ingrained within the fabric of teaching that children are barely aware of it. We must therefore weave supportive corrections into our day-to-day interactions to begin to shift the needle toward progress.

In an ideal world, we’d barely notice the use of inclusive language. The more we use it, and the less it’s talked about, the better.