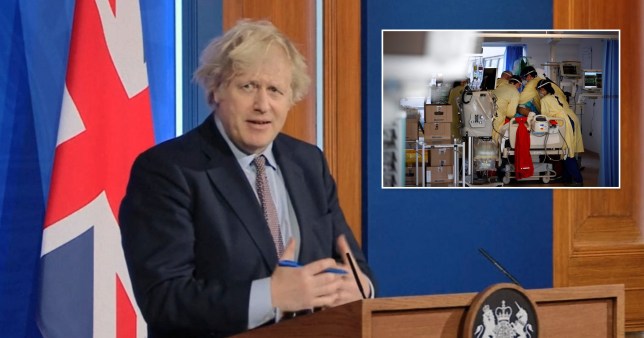 Vaccinations were described as a ‘leaky’ wall against coronavirus (Picture: PA/Getty)

The prime minister has warned people to continue to follow the rules to prevent coronavirus as we ‘don’t know’ how strong the country’s defences will be against a potential new wave of infection.

Speaking at a press conference this afternoon, Boris Johnson said: ‘What we don’t know is exactly how strong our fortifications now are, how robust our defences are against another wave and we’ve seen what’s been happening – that’s why I stress what’s happening with our European friends because historically at least there’s been a time lag and then we’ve had a wave ourselves.

‘I just stress the importance in everybody maintaining the discipline that people have shown for so long and continuing with the cautious but, we hope, irreversible roadmap that we’ve set out.’

Echoing his warning, Professor Chris Whitty, the Chief Medical Officer for England, said there is a ‘wall of vaccination’ but ‘it is not a complete wall. It’s a kind of leaky wall.’

He cautioned that some people would not have taken up their vaccination offer and could be affected by a new wave.

Mr Johnson said that being cautious is the ‘way to get the results that we want’.

He said: ‘Already because of the relaxation that we’ve seen, almost certainly because of the opening of schools again, you’re starting to see some of those graphs slightly curl a bit like old British Rail sandwiches, moving upwards a little bit in the younger groups.

‘You’ve seen what’s happening on the continent and we’ve seen that happen before, that’s why it’s so vital that, you know, we do what we’re doing right now.

‘We continue to fortify the population, roll out the vaccine at the speed that we are, make sure, as Chris and Patrick say, everybody gets their second dose when they’re asked to come forward, when they’re given their turn.

‘But, you know, just make sure that we are cautious in our approach, I think that’s the way to get the results that we want.’

From today, restrictions have eased slightly. Groups of up to six, or two households, can socialise in parks and gardens once more, while outdoor sports facilities can reopen after the stay-at-home order ended.

The prime minister’s comments came amid speculation that France could be added to the UK’s travel ban list. 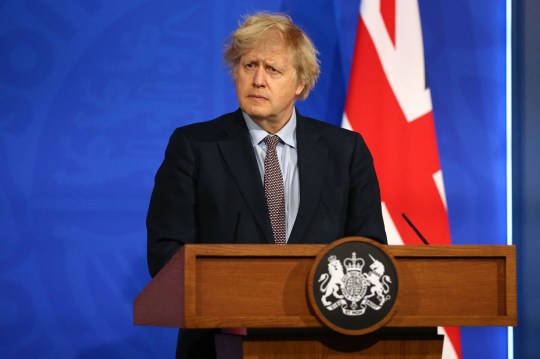 That measure will be discussed at a meeting of the ‘Covid O’ committee on Tuesday, according to the Daily Telegraph.

From April 6, hauliers from outside the UK and Ireland visiting England for more than two days will need to take a Covid-19 test within 48 hours of their arrival and once every 72 hours afterwards.

But the Government could go further by adding France to the UK’s red list.

Some 4,872 patients were recorded to be in intensive care in France, nearly matching the most during the country’s previous coronavirus surge in November.

Red list status would mean direct flights, sailings and trains from France to the UK could be banned, and people who are not UK or Irish nationals or UK residents would be prohibited from entering the UK if they had been in France during the previous 10 days.

Eligible arrivals would be required to spend 10 days in a quarantine hotel at a cost of £1,750 per person.

There are currently 35 countries on the red list, including all of South America and southern Africa, the United Arab Emirates and Qatar.

First of the summer wines: picnic wine, cocktail recipes and what to serve with them | Greener grapes