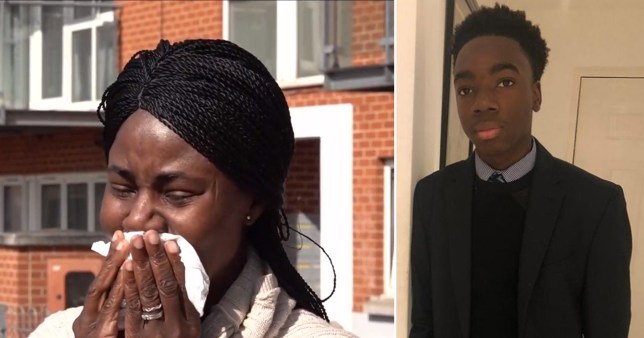 Mum Evidence Joel broke down as she said her missing son Richard Okorogheye is her ‘everything’ (Picture: Sky News/Met Police)

The parents of a missing teenager have criticised the Met Police claiming they were not ‘taken seriously’ when they reported their son’s disappearance.

Richard Okorogheye, 19, has not been heard from for more than a week after he left his home in Ladbroke Grove, west London, at about 8.30pm on March 22.

The parents of the Oxford Brookes student, who has sickle cell disease and has been shielding during the pandemic, said his disappearance was completely out of character for him.

When worried Evidence Joel and Newton Okorogheye reported their son’s disappearance two days later, they claim Met officers did not consider Richard to be ‘high risk’ until he’d been missing for six days.

‘I was expecting assurance. My son was missing and it broke my heart.’

Met Police yesterday said they were ‘becoming increasingly concerned’ for Richard’s welfare and appealed to the public for information on his whereabouts.

Ms Joel, a nurse, broke down in tears as she explained her son was ‘struggling to cope’ with shielding and university pressures.

She said he told her he was going to meet a friend but had left without his wallet, jacket and medication.

The parents said their son would only leave the house to go to hospital for regular blood transfusions for his condition.

‘All he said to me was ‘mummy, I’m going to see my friend’. I trusted him, I had no doubt… I had no reason to ask further questions,’ said Ms Joel.

She is worried her son could have been groomed by someone online who is ‘holding him against his will’ and said ‘something went wrong in Richard’s room while he was isolating’.

‘Even if Richard had had enough, Richard would not just go and not come back,’ she added.

Appealing for his safe return, she said: ‘It’s my baby, it’s my treasure. He’s my oxygen, he’s my crown. He’s everything to me, he’s the reason why I live, the reason I exist.

‘Right now I’m empty, there is nothing to look forward to. He’s taken my breath away from me.’

‘We are following every lead possible and are appealing for the public to help us in our work.

‘If you may have seen Richard, please contact police.

‘If Richard is safe and well, we ask him to contact us as a matter of urgency so that we can put his family’s minds at ease.’

They could also go online here to pass any information on to the charity Missing People.