The table uses 12 of Carpentier’s very own type of legs (Picture: Cnet)

A Dutch programmer has taken DIY furniture to a whole new level by creating a ‘walking table’ with 12 legs.

Giliam de Carpentier has created a sleek-looking 12-legged table that can get around make its way to you if you’re too lazy to go to your desk.

‘Turns out my table can actually WALK as well as I hoped it would,’ tweeted Carpentier along with a video last week.

The table has two motors that the maker modified using small Arduino computer controllers to alter their supply of electricity, ensuring the table legs move smoothly and at the desired pace.

The table uses 12 of Carpentier’s very own type of legs that he based on  Strandbeest, a kinetic bio-mechanical sculpture designed by Dutch artist Theo Jansen. These legs have one extra joint per leg, making it stable and efficient. 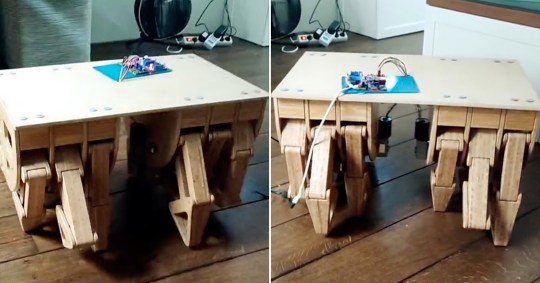 A Dutch programmer has taken DIY furniture to a whole new level by creating a ‘walking table’ with 12 legs (Picture: Cnet)

‘Like Theo Jansen, I found my leg mechanism using a custom evolutionary optimization algorithm, simulating millions of options to find an optimum. So it’s similar in spirit, indeed. But mine has an extra joint position and exact toe radius, and all other ratios are different too,’ said the maker in a tweet.

‘In more recent years, I picked up some electronics and woodworking skills as well, allowing me to actually start constructing this out of bamboo and aluminum using a CNC myself,’ he wrote on a Reddit thread.

Carpentier said that the table had two 24V brushless motors that he bought from Aliexpress ‘costing about 40 bucks each’. He also added that constructing the table took ‘more hours than bucks’.

‘Really impressive,’ wrote another Redditor. ‘I may, though, have nightmares tonight thinking of this table chasing me at high speeds.’

Warning! A Housing Market Crash Will Tank These 3 Stocks.