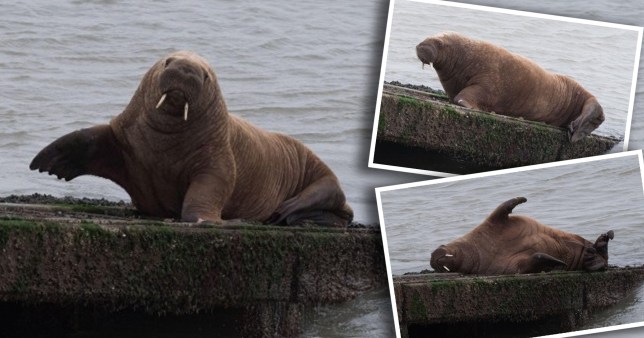 ‘Wally’ the Arctic walrus has been spotted back in Wales.

The sleepy-looking mammal has been on quite a journey so far after initially drifting to Ireland on an iceberg.

The walrus was spotted by a delighted Muireann Houlihan, five, off Valentia Island, County Kerry, on March 15.

It then appeared on the Pembrokeshire coastline in Wales on March 21 but had not been seen since.

The walrus has now popped up for the second day running on the RNLI lifeboat station’s slipway in Tenby, Wales.

Locals have nicknamed it ‘Wally’ after the children’s puzzle book character Where’s Wally who is also hard to find.

But they may have to argue with Muireann about the name because she intended to call it either Isabelle if it was a girl or Cian if it was a boy.

The animal’s gender has still not been determined. 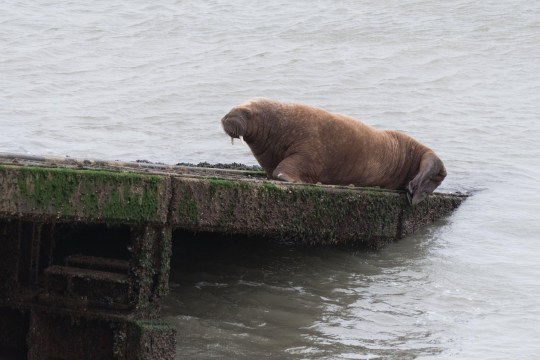 The walrus has become quite a star with crowds gathering to take his picture on Sunday.

Last week the RSPCA said it thought the huge creature was in good health.

It appeared to have a few scrapes but seemed in generally good condition and was seen to be swimming well, the organisation said.

Geoff Edmond, the RSPCA’s national wildlife coordinator, said after the second sighting: ‘This was a landmark day for the RSPCA’s wildlife team.

‘While we’ve been rescuing animals and responding to welfare calls for almost 200 years, I believe this is our first ever walrus call.’

RSPCA animal rescue officer Ellie West added: ‘It seems this Arctic walrus has swum over to Wales and was resting on rocks when I went to check on him.

‘He was resting and, although appearing slightly underweight, thankfully he wasn’t displaying any signs of sickness or injury.

‘This is an incredibly rare sighting and these big, beautiful animals never usually venture so far south.

‘The juvenile walrus has likely travelled down this way in search of food.’ 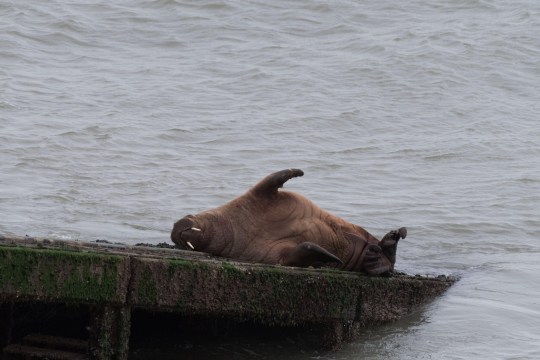 The walrus has been on quite a journey (Alamy)

West continued: ‘I will certainly never forget this day, in fact it’s still sinking in that I’ve been monitoring a walrus on the Pembrokeshire coast, it’s been absolutely amazing.’

If a member of the public spots the walrus and has concerns about his welfare, they are asked to call the RSPCA’s emergency hotline on 0300 1234 999.

People have also been told to keep their distance and not approach the animal as it needs to rest and conserve energy.