The Beluga XL5 was hit by a bolt of lightning soon after departing Hawarden Airport in Flintshire (Picture: Glenn Smethurst/Daily Post Wales)

One of the world’s largest aircraft was struck by lightning shortly after taking off.

The huge whale-like Airbus Beluga was hit as it flew over North Wales on Tuesday afternoon.

The incredible moment was captured on Glenn Smethurst’s dashcam as he drove through Connah’s Quay at around 1pm.

He described hearing a ‘loud bang’ overhead, but it wasn’t until he got home and checked the footage that he realised what happened.

The giant transport plane, used to carry parts of other aircraft around the world, went on to land safely in Hamburg as planned.

Airbus confirmed the strike and said the aircraft would be thoroughly checked ahead of its next take off. 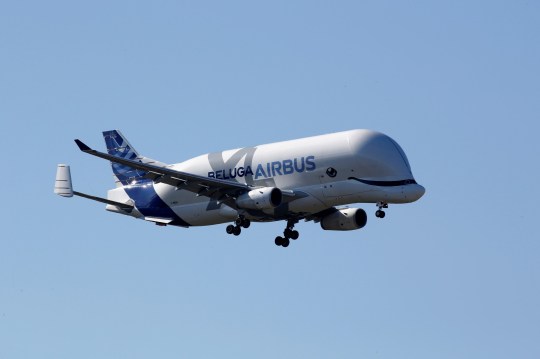 The BelugaXL planes are named after the Beluga whales and are shaped to resemble the giant aquatic mammals (Picture: Reuters)

‘This is a routine event in aviation and the aircraft continued with its journey to Hamburg as planned.

‘In accordance with standard operating procedure, the aircraft will be inspected before its next flight.’

One person said: ‘Me and my kids jumped out of our skin, all I saw was a bright blue light, and the biggest boom I’ve ever heard in my life.’

Another said: ‘I saw bright blue light and heard the massive boom. I’ve been in a thunder storm in Florida and never heard anything like that bang before.’

The BelugaXL planes are named after the Beluga whales and are shaped to resemble the giant aquatic mammals with eyes and a mouth painted on the aircraft.