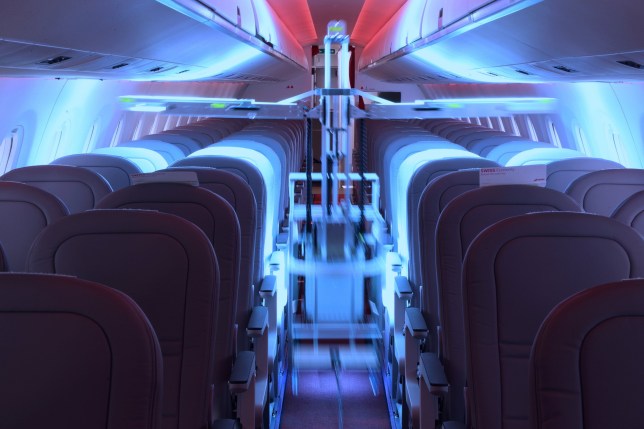 An autonomous virus-killing robot may soon be sterilising aeroplane cabins in an effort to make air travel safer during the pandemic.

The robot emits powerful UVC rays, which can effectively kill more than 99 percent of bacteria and pathogens without using any chemicals. Similar technology has been used to clean hospitals and laboratories for decades, according to UVeya co-founder Jodoc Elmiger.

Because UVC radiation is dangerous to humans, the robot has been designed to travel through the cabin by itself.

UVeya has developed three prototypes, which are being trialled inside Embraer jets from Swiss airline Helvetic Airways.

Each robot can disinfect a single-aisled cabin in approximately 13 minutes. Larger planes, however, will take longer.

The devices will have to be certified by aircraft makers before they can be used in the real world, Elmiger said. It’s possible the UVC technology may eventually cause cabin upholstery to fade.

Manufacturers hope the technology will help ease passenger fears about catching Covid-19 during travel. Ultraviolet light has previously been used to sanitise buses in China.

Mehdi Guenin, a Helvetic spokesman, said: ‘If our passengers, if our crew know our aircraft are safe — that there are no viruses or bacteria — it could help them to fly again,’ Guenin said.

The US Centers for Disease Control says that UV-C radiation can inactivate a similar virus to SARS-CoV-2, which causes Covid-19.

But the health agency says there isn’t much published data yet on the wavelength, dose, and duration of UVC radiation needed to inactivate SARS-CoV-2.