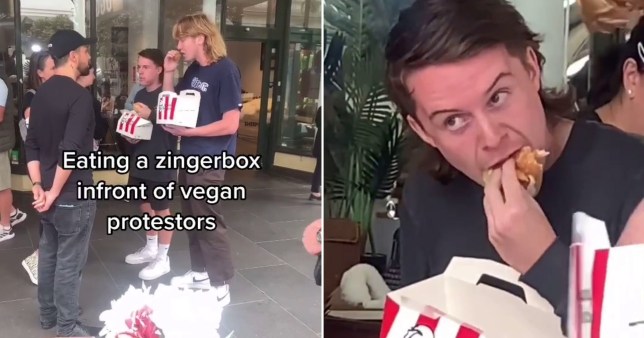 Social media stars Nick and Bill were filmed devouring a KFC Zinger Box in front of the group in Melbourne (Picture: @nickandbill / TikTok)

Two men on TikTok gatecrashed a pro-vegan rally and ate fried chicken in front of activists.

Nick and Bill, who have more than 85,000 followers on the social media platform, were filmed devouring a KFC Zinger Box in front of the group in Melbourne.

A text caption over the video read: ‘Eating a Zinger Box in front of vegan protesters’.

A plant-based activist is heard calling one of the men a ‘moron’ and asking if he thinks what they’re doing is ‘funny’.

TikToker Bill, who has long blonde hair, held up a piece of chicken and asked: ‘Mate, do you want a bite?’

The activist responded calmly: ‘I answered your question didn’t I? I said no.’

Bill said, ‘Better luck next time,’ and bit into the piece of meat.

The activist then said he was glad the TikTok duo had appeared at the event. 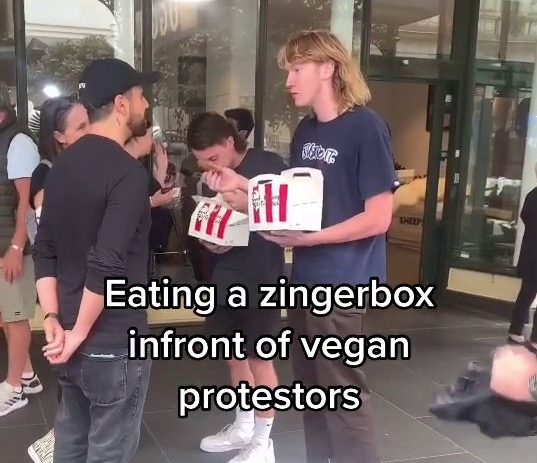 Nick and Bill, who have more than 85,000 followers on the social media platform, carried out the stunt (Picture: @nickandbill / TikTok) 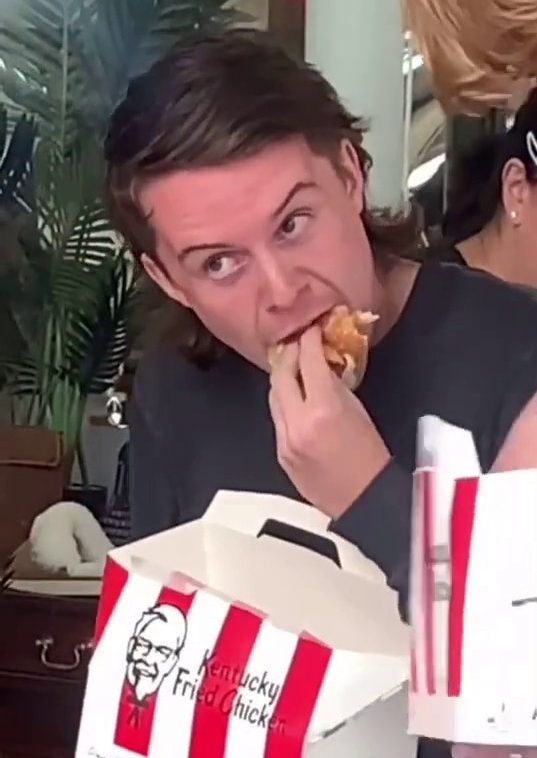 The pair continued to devour chicken in front of the plant-based activists in Melbourne (Picture: @nickandbill / TikTok)

‘I actually really appreciate these guys being here, it’s creating a spectacle for others,’ he said.

Another protester agreed with him, before telling the social media stars why she turned vegan.

But the two men simply continued to stuff their faces with burgers as the woman spoke to them.

Nick and Bill captioned the TikTok clip ‘not all superheroes have capes’, along with the hashtags ‘anti-vegan’ and ‘vegan teacher’.

A number of people commented on the video to claim the TikTokers should be free to question the vegan activists.

‘They’re pushing their veganism on the public, so what’s wrong with what the boys are doing. Freedom people,’ one person wrote.

‘If they’re pushing their ideas on us, we can push our ideas on them,’ another commented.

But others thought it was disrespectful.

‘This isn’t funny or cool, I’m not even vegan but it’s about respecting others,’ one wrote.

You CAN be confident of Covid vaccines despite South Africa variant fears, says minister