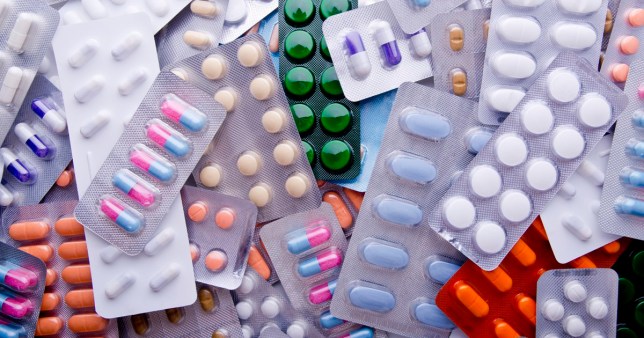 The UK has one of the highest rates of antidepressant use in the world (Picture: Getty)

There is an ‘urgent’ need for more research on how to safely stop taking antidepressants, experts have said in a major review.

In England, around 7.3 million adults were prescribed an antidepressant, such as Fluoxetine or Sertraline, in 2017/18.

The UK has one of the highest rates of use of the medications in the world.

Yet academics say not enough attention is given to how to stop taking them safely, with many patients reporting difficult withdrawal effects which can even be mistaken for a relapse of depression.

A overview of research into the topic found that while there have been over 1,000 studies on people starting treatment with antidepressants, there are just 33 randomised control trials which examined stopping them.

The Cochrane review of antidepressant discontinuation said patients could benefit from talking therapy as they navigate coming off the tablets, or they may benefit from a very slow taper over months, down to doses so small they are given in liquid form. 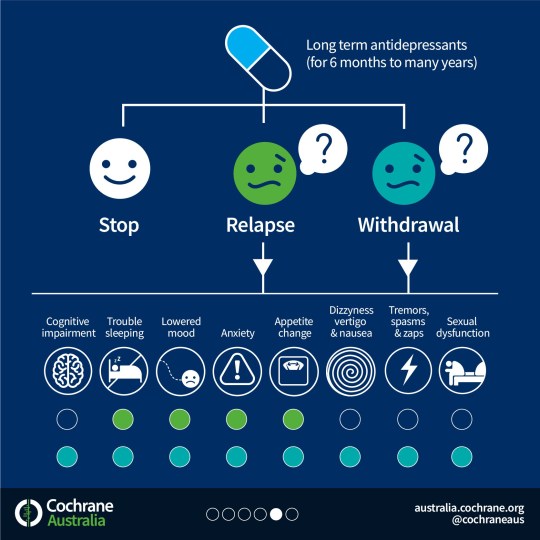 Antidepressant withdrawal can be mistaken for relapse, as the symptoms are similar (Picture: Cochrane review)

However, there needs to be more evidence to guide these decisions as at the moment the evidence is too limited, and study results may be muddied by withdrawal effects mistaken for relapse.

UCL-based researcher and training psychiatrist Dr Mark Horowitz, who co-authored the review, told Metro.co.uk: ‘There are no studies that have looked at whether these products are safe for years or decades.

‘What they’re actually doing to people’s brain, or body long term, we don’t really know the answer to that.’

He said that there are a lot of potential adverse side effects to taking the drugs, which can include sleep disturbances, weight gain, and sexual dysfunction.

Many patients also say they are faced with emotional numbing, and would like to come off their medication.

Lead review author and Belgium-based researcher Dr Ellen Van Leeuwen said: ‘As a GP myself, I see first-hand the struggles many patients have coming off antidepressants.

‘It’s of critical concern that we don’t know enough about how to reduce inappropriate long-term use or what the safest and most effective approaches are to help people do this.’

Dr Horowitz added: ‘For me this is such a critical issue both from a personal and a professional perspective.

‘I’m one of the hundreds of thousands of people who have had or are having long, difficult and harrowing battles coming off long-term depressants because of the severity of the withdrawal effects. 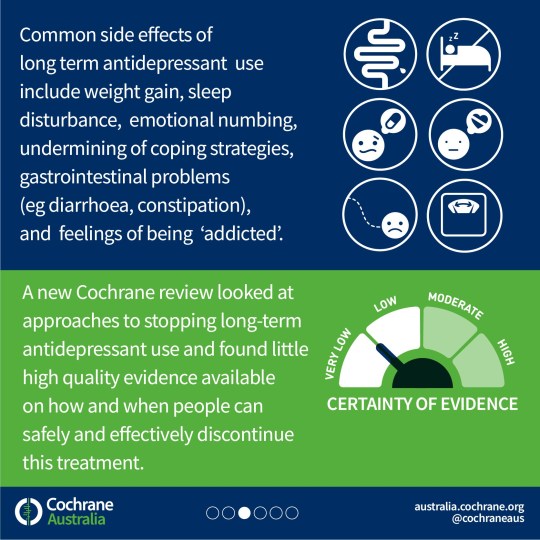 The certainty of evidence on stopping antidepressants is low, the review found

‘And yet rather than being able to find or access any high quality evidence or clinical guidance in this situation, I could only find useful information on peer support sites where people who had gone through withdrawal from antidepressants themselves have been forced to become lay experts.

‘Since then the Royal College of Psychiatrists has taken a great step forward in putting out guidance on stopping antidepressants in 2020, however, there is still a lack of research and therefore evidence in this area on what works for different people.’

‘I want other people to have the evidence base to come off without the same trouble I had.’

He was one of the authors of new guidance with the Royal College of Psychiatrists which looked at how slowly tapering could help patients come off their medication with fewer withdrawal symptoms.

For some, this may even take years, going at a much slower pace than is often recommended to patients.

The official information recognises that many people suffer adverse effects from stopping medication, such as increased anxiety, dizziness, or the feeling of an electric shock in your arms, legs, or head which is sometimes called ‘zaps’.

Dr Horowitz said: ‘I get messages and emails from people saying that they’ve printed [the guidance] out and taken it to their doctors, so that’s very heartwarming to hear.

‘One of the things that patients ask their doctors for is access to liquid versions of the drug to taper more carefully.

One of the things that most people don’t appreciate is you cannot taper carefully off antidepressants with just tablets. There’s simply too big a dosage to do that, so you need liquids. I think a lot of doctors are reluctant to prescribe it.

‘I hear a lot of stories of patients being told “No, that’s too much [expensive]”. Which I think is very unfortunate, because it probably means that they end up being stuck on their tablets.’

He said that there now seemed to be growing momentum towards looking at how to safely deprescribe psychiatric medication.

What is now needed is more education for GPs and psychiatrists about the developments so that new guidelines on best practice are delivered to patients, he said.