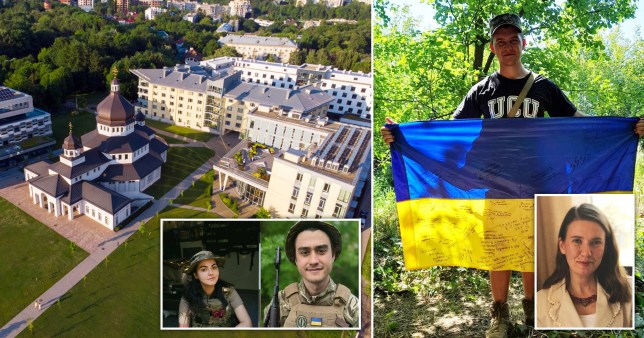 As the first missiles struck Ukraine, classes were abandoned with some students and staff heading to the frontline.

Academic life at the Ukrainian Catholic University in Livi ground to a halt as the faculty dispersed at the outset of the full-scale Russian invasion.

What came next was a demonstration of how the nation’s highly resilient civil society has moved to a war footing since February 24.

One student is at the front with the university’s badge in his coat pocket, so it is ‘near my heart’. Other members of the academic community have made the ultimate sacrifice in the defence of their homeland.

A lecturer from the university who has been given safe harbour in the UK spoke of her pride in this ‘resistance’ at the end of a year in which nearly all students resumed online and then in-person studies.

Nataliya Pratsovyta has taken up a position as a fellow at the University of Warwick and, together with her 15-year-old daughter, Kateryna, is living with a host family in Leamington Spa. 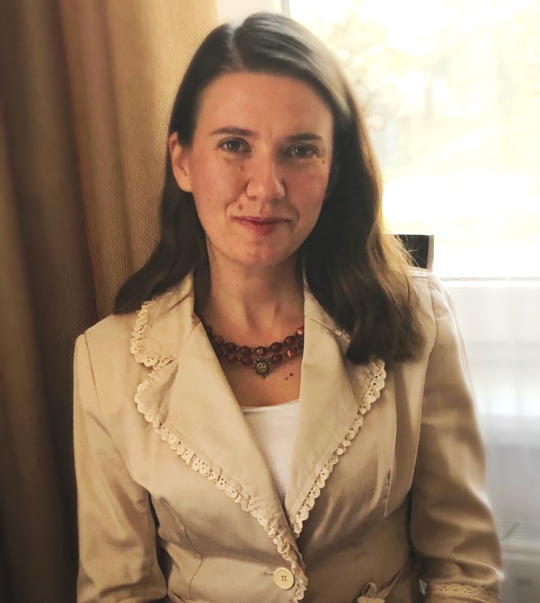 ‘When the war started there were air raid sirens and we frequently had to go into shelters,’ she said. ‘The instructors organised voluntary meetings with students online, just to check on them, and these meetings would take place when normally the classes would have taken place.

‘Not all the students would show up but it was really important to check on them. It was a really tense and stressful time for everyone.’

Although the gateway city in western Ukraine is away from the frontline, there has been the continued danger of air strikes, with missiles continuing to rain down in recent weeks, hitting the civilian infrastructure.

Nataliya, 38, first went to stay with relatives in Poland before arriving in Warwickshire through an initiative by the UK university to host Ukrainian scholars, allowing them to continue their work.

She has joined the Department of English and Comparative Literature Studies and continues to support her students in her homeland, which includes supervising their written assignments.

Only a few weeks into the war, the Ukrainian faculty decided to move classes online before in-person learning resumed in September 2022. 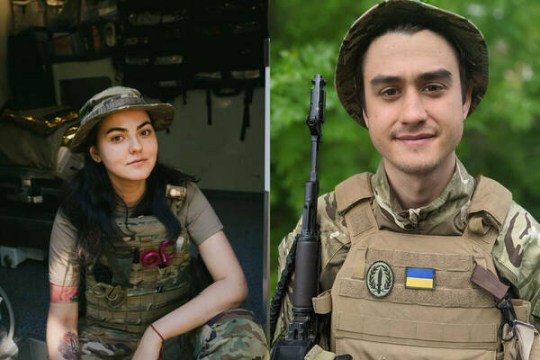 Alina Mykhaylova and Tymur Abdulin are among students who have rallied behind Ukraine’s war effort (Picture: Ukrainian Catholic University)

‘Resuming classes gave everyone a sense of commitment and a sense of purpose,’ said Nataliya, who has the title of docent in Ukraine.

‘Many students were very eager to resume studies, they were worried about their future and it alleviated that anxiety in many ways.

‘Many students also joined voluntary organisations, both organised by the university and independently, and they really thrived.

‘Some are making maps for the military and others are countering pro-Russian propaganda and others are translating news from Ukrainian into other languages to let the world know what is going on.

‘Almost everyone is trying to help the war effort. Some are looking at social media and reporting propaganda posts, others are helping with cyber-security and some are involved in collecting money.

‘All are necessary for military or humanitarian support.’ 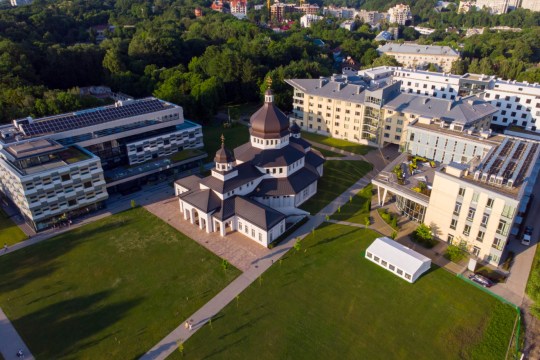 Reconnecting from different parts of the world, the community has achieved wartime milestones which included Year 4 degree students attending an in-person graduation ceremony during the summer.

‘It was a great milestone, a great moment showing they are moving forward despite all their difficulties,’ she said.

‘I’m really proud of the students and instructors for being able to continue the process. It was amazing to see how they were pushing forward and supporting each other through the process.

‘It gave me so much hope and I am really proud of those who have graduated and of those still studying.

‘The decision to resume studies gave us a feeling we are moving forward, we are resisting. Despite what is happening we are all doing everything we can where we are to resist this invasion.’ 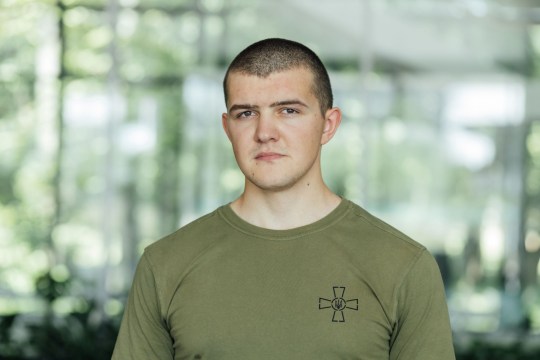 Dmytro Dymyd has kept the university close to his heart as he serves Ukraine on the frontline (Picture: Ukrainian Catholic University)

Nataliya’s husband Andriy, a lawyer, and her parents are still in Ukraine, and she will not be travelling home at Christmas.

‘I hope and pray that the Christmas holidays are peaceful in Ukraine and we are closer to victory,’ she said.

‘And I hope our military and medical personnel and clergy and those who are supporting the Ukrainian people and those at the frontline specifically have a very peaceful and blessed time this Christmas.’

The cost of the war is evidenced by those in the university’s community who have fallen after taking up arms against the invasion. Others continue to serve on the frontline of the conflict. 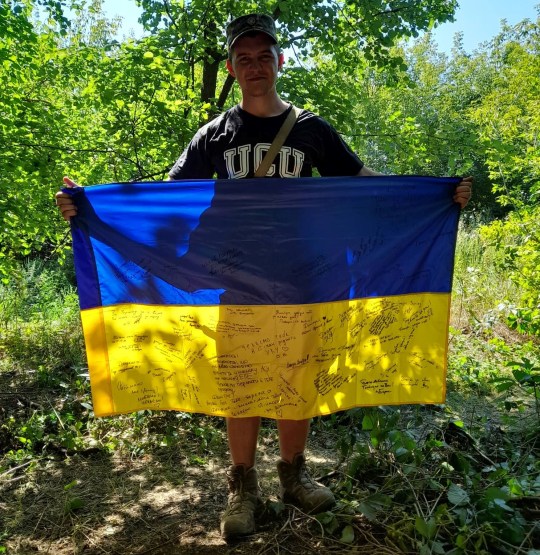 Dmytro Dymyd answered the call of duty and has kept in touch with the university during his service (Picture: Ukrainian Catholic University)

They include Dymtro Dymyd, whose brother, Artem, died in Dontesk as he fought in the ‘Harpoon’ special forces battalion.

‘I love UCU and I enjoy studying there,’ Dymtro said in a message to the university. ‘When fighting, UCU is in my thoughts.

‘I remember that I want to finish my studies. I have the badge of the UCU in my coat pocket, near my heart.

‘I used to have it pinned on the coat, but I didn’t want to risk losing it. That is why UCU is a part of my fond memories and plans for the future.’ 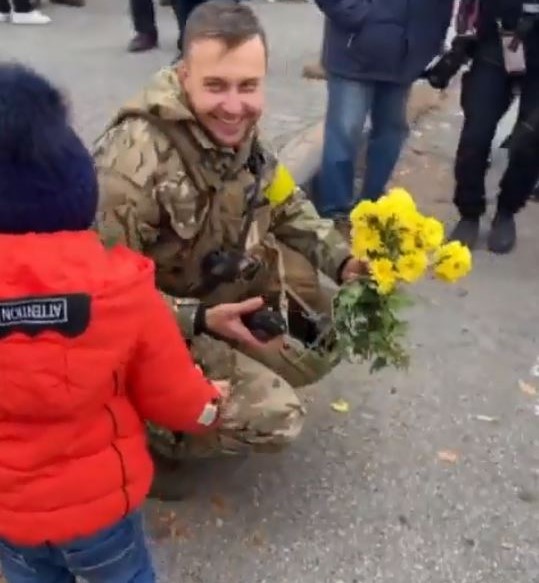 Roman Lozynsky was among the Ukrainian soldiers receiving a victor’s welcome on the streets of liberated Kherson (Picture: Roman Lozynsky/Facebook)

Roman Lozynsky, a graduate, was among Ukrainian troops who liberated Kherson, his service beginning at the age of seven when he joined the national scout organisation.

He went to war in the first days of the invasion and was filmed showing his radio to a child in the recaptured southern city.

Other students include Alina Mykhaylova, a paramedic and medical aid coordinator, and Tymur Abdulin, a lieutenant in the Ukrainian armed forces.

Members of staff have also headed to the front while in Lviv diplomats, business people and members of the clergy and public sector are among those on the campuses. In the first seven months of the war, the university spent $4.4 million (£3.8 million) on humanitarian aid and set up scholarship funds in memory of the fallen.

Nataliya is among 10 Ukrainian visiting academics and their families in the initiative being led by Warwick’s Institute of Advanced Study with mentoring and support from various other departments. 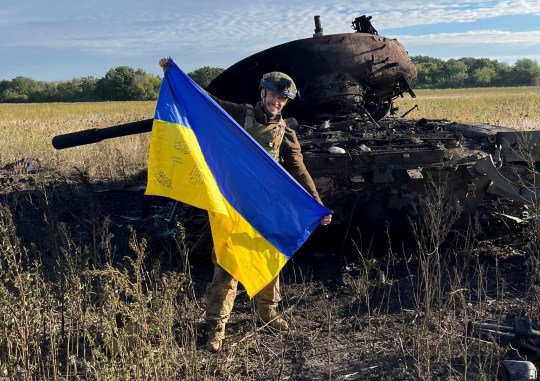 ‘I am really praying for a quick victory and that we can continue to build a democratic society together with other European countries,’ she said.

‘Hopefully we can join the European Union and NATO soon.

‘For now, I’m using my time and the fantastic facilities here as best I can to support my people.’