Caption: Rishi Sunak may have to hold emergency budget over energy crisis

Chancellor Rishi Sunak could be forced to deliver his second budget in six months because of the growing energy crisis.

Vladimir Putin’s invasion of Ukraine has sent shockwaves through the global economy at a time when fuel bills and inflation were already rising.

The cost of a barrel of oil rose higher than at any point since 2012 this week and wholesale gas prices have soared.

Last month, the Treasury pledged £9 billion towards helping families offset the cost of a steep price rise due to kick in next month.

The Ukraine crisis makes a further rise of the price cap in October all but certain at a time when inflation is eating into household budgets.

Mr Sunak is due to deliver a fiscal statement to the Commons on March 23, which was expected to be a relatively minor update.

Now The Sun reports plans may have to be revised and the government could find itself having to set a new budget. 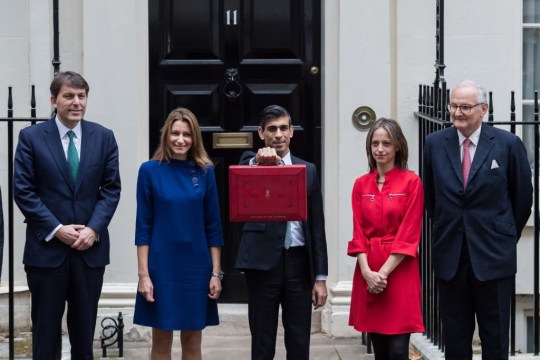 The October Budget may require major revisions as the Ukraine crisis sends shockwaves through the global economy (Picture: Getty)

The report comes after the RAC urged the chancellor to cut VAT on fuel in the face of record high prices at the pump.

Data firm Experian Catalist said the average cost of a litre of petrol at UK forecourts reached a new high of 153.50p on Thursday, up from 152.20p on Wednesday.

Prices are rising as measures to restrict imports from Russia in retaliation for the invasion of Ukraine loom, a move which would put pressure on supplies amid rising demand.

RAC fuel spokesman Simon Williams said: ‘This latest round of rises means the price of a litre of unleaded has now gone up by nearly 4p in just a week, adding £1.86 to the cost of filling a 55-litre family car.

‘Diesel has gone up by a similar amount over the same period, adding over £2 to the cost of filling up.

‘Once again, the high cost of oil is the main factor contributing to the prices drivers are paying, with a barrel now almost at the 120 US dollars mark, something that hasn’t happened since the spring of 2012.

‘The RAC is now calling on the Treasury to look at an emergency, temporary cut in the VAT rate levied on fuel to ease some of the pain drivers are facing and to better protect them from upcoming rises.’