The Ukrainian city of Kherson has seen a wave of protests held by brave civilians opposing the occupation of Russian troops.

It became the first major city to fall to Vladimir Putin’s forces following heavy fighting and intense shelling on Wednesday.

Once troops had gained control, they forced their way into the city council building and attempted to impose curfews on residents.

But that did not stop thousands of them gathering in the city centre, waving Ukrainian flags in defiance, and chanting ‘Kherson is Ukraine’.

Footage from the protest appears to show one man climb on top of a Russian tank and begin swinging his nation’s flag to an eruption of cheers.

The mayor of Kherson, Igor Kolykhaev, had previously urged Russian soldiers not to fire at civilians, adding there were no Ukrainian forces within the city.

He called on citizens to adhere to the conditions set by Putin’s forces in order to ‘keep the Ukrainian flag flying’. 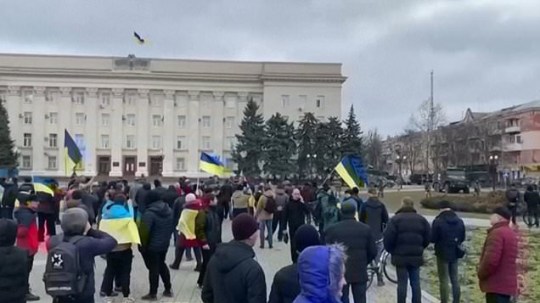 Kherson cities ask me to share the news with you. They want the whole world to know they are Ukraine and they are proud of it. They are protesting under risk of being killed by Russians pic.twitter.com/rwCuVjn5Lv

They include a strict curfew between 8pm and 6am, going outside in group no bigger than two, and allowing only cars carrying food, medicine and other supplies into the city.

Iuliia Mendel, the former spokesperson to Ukraine’s president who is from Kherson, shared a video of protesters, showing the strength and determination of those in the city.

She said: ‘Kherson cities ask me to share the news with you. They want the whole world to know they are Ukraine and they are proud of it. They are protesting under risk of being killed by Russians.’

The protests come as Russia declared a ceasefire in the cities of Mariupol and Volnovakha to allow a safe passage for humanitarian aid and the evacuation of civilians.

However, the evacuation of Mariupol has since been postponed as the city remained under fire with the council warning residents to disperse and seek shelter.

Kyrylo Tymoshenko, deputy head of President Volodymyr Zelenskyy’s office, warned Russia was ‘not holding to the ceasefire and has continued firing on Mariupol itself and surrounding areas’.