The girl said she had the ‘best mum in the world’ (Picture: Twitter/Getty/EPN)

A Ukrainian girl, 9, has promised to ‘be good so she can meet her mama in heaven’ in a heartbreaking letter.

Galia wrote to her late mum thanking her for ‘the best nine years of her life’ after she was killed in the Russian invasion.

The tragedy happened in Borodyanka, where the situation is said to be ‘significantly more dreadful’ than Bucha, where mass civilian graves were discovered.

‘Mama. This letter is a present for you on March 8’, the girl wrote. ‘If you think that you raised me in vain. Thank you for the best nine years of my life.

‘I am very grateful to you for my childhood. You are the best mum in the world. I will never forget you.

‘I want you to be happy in the sky. I wish you go to heaven. We will meet in heaven.

‘I will try my best to be good to go to heaven also. Kiss you, Galiya.’ 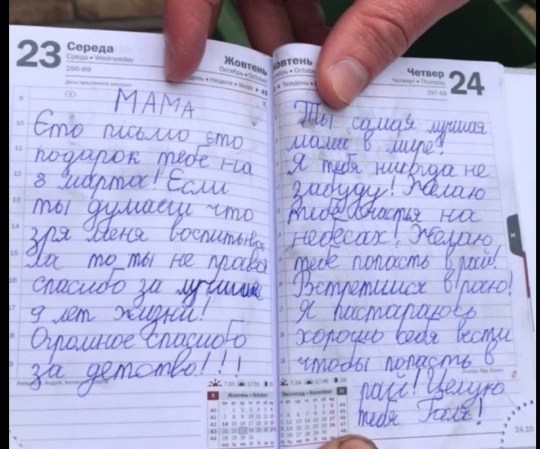 Galia said she’d had ‘the best nine years of her life’ with her mum (Picture: Twitter)

Here’s the letter from 9-old girl to her mom who died in #Borodianka.

You’re the best mom in the whole world. I’ll never forget you. I wish you’ll get in Heaven and be happy there. I’ll do my best to be a good person and get in Heaven too. See you in Heaven! 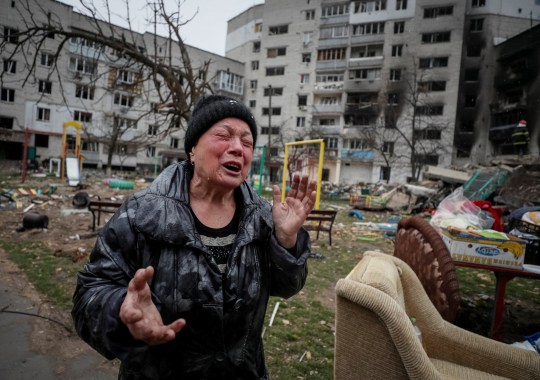 Mariya, 77, breaks down after her daughter and son-in-law died under the rubble of a building destroyed by Russian shelling (Picture: Reuters)

Horror was sparked this week as Kremlin troops were accused of massacring hundreds of innocent people in Bucha.

Some victims were discovered shot at close range and others had hands tied behind their backs.

But President Volodymyr Zelensky warned on Thursday evening: ’They have started sorting through the ruins in Borodyanka. It’s much more horrific there, there are even more victims of Russian occupiers.

‘And what will happen when the world learns the whole truth about what the Russian military did in Mariupol?

‘There, on almost every street, is what the world saw in Bucha and other towns in the Kyiv region after the withdrawal of Russian troops.’

Many people still don’t know if their family members are dead or alive and have spent days watching rescue teams sift through the rubble.

‘My mother, my brother, brother’s wife, his mother and father-in-law, are still there, as well as other people who were there in the basement’, Borodyanka resident Vadym Zagrebelnyi said. 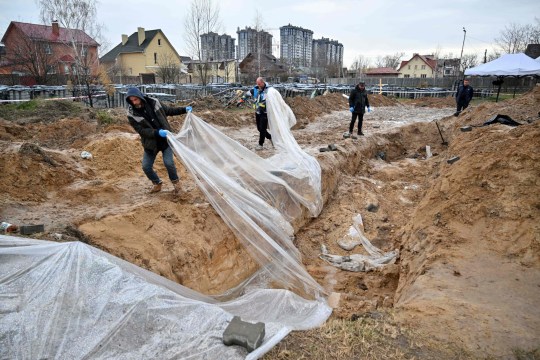 Workers remove the plastic covers from a mass grave in Bucha, near Kyiv (Picture: AFP via Getty Images) 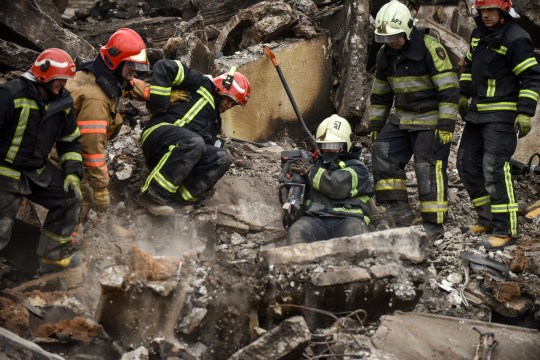 Emergency workers search the rubble of a destroyed apartment block in the city of Borodyanka (Picture: EPA)

‘But there were other people on the upper floors there, and with children too. And I know for sure that they didn’t come out. I know they were there at that time.’

Chilling intercepted radio messages show a Russian commander ordering his men to ‘wipe out a village’ near Mariupol, according to Ukrainian intelligence.

‘Kill, them all. What are you waiting for motherf***ers? Expend everyone. Do you understand?’, he apparently told his men.

Russia has repeatedly denied targeting civilians, claiming images of bodies in Bucha were staged by the Ukrainian government.

Boris Johnson made a surprise trip to Kyiv yesterday ‘to show solidarity’ with the war-torn nation.

He told Mr Zelensky ‘the Ukrainian people are a lion, and you are its roar’ as he promised to ratchet up sanctions on Moscow.

Scotland: Strangler now identifies as a baby who wears nappies in jail