Ukraine’s military claims to have taken out a £4 million Russian tank with a single shot from an inexpensive missile launcher.

The Kremlin hoped the high-end tank would help tip the balance on the ground but defending forces seem to have identified a chink in its very expensive armour.

Drone footage appeared to show a T-90m armoured fighting vehicle being wiped out by a Carl Gustaf recoilless rifle near Kharkiv.

The Swedish-made portable launcher costs £16,000 and looks to have been fired by a lone soldier lying in wait in tree cover by a narrow road.

Russian forces have bombarded the north-eastern city, once the capital of Soviet-era Ukraine, but have failed to capture it, with Ukrainian forces pushing soldiers back and retaking land in recent days.

The Ukrainian Ministry of Defence shared the footage online, describing the destroyed targets as the ‘pride of the Russian tank industry’, before thanking the ‘Swedish people and the King for their help.

A separate photograph purportedly from the scene showed the burned out husk of the tank, which may have been carrying up to three people at the time.

Dubbed ‘Breakthrough’ tanks, the advanced vehicles are being deployed in combat for the first time during the Ukraine invasion.


A photo claimed to show the wreckage of the destroyed advanced tank (Picture: EyePress News/REX/Shutterstock)

They are fitted with infrared technology which can jam laser-guided missiles, can generate a smokescreen to conceal themselves and are fitted with ‘exploding armour’ designed to repel direct hits while protecting the tank.

The huge cost of the weapons mean they were withheld during the initial stages of the invasion but have now been sent in as Russia continues to struggle to secure a decisive breakthrough.

According to British military intelligence, around 100 of the pricey tanks are now being used but at least one has confirmed to have been destroyed, suggesting they may not be as invincible as the Kremlin believes.

Kyiv claims to have wiped out more than 1,000 since February 24, a huge dent in the ground resources Russia is relying on to secure territory. 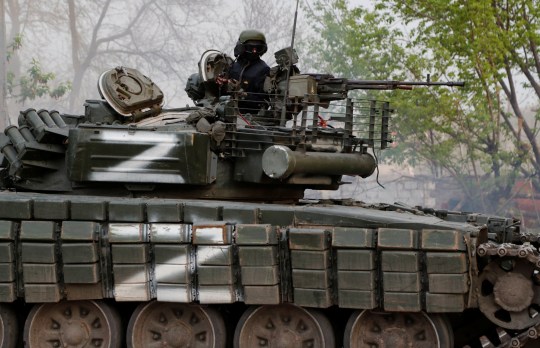 Tanks daubed with the Z symbol have become one of the most recognisable images of the conflict (Picture: Reuters)

The provenance of the weapon used to destroy the T-90m is unclear but Sweden has provided thousands of anti-tank missiles to Ukrainian forces and looks set to join Nato.

Its government is expected to end a 200-year-old policy of shunning defence alliances and apply for membership, with Finland also expected to follow suit.

Vladimir Putin’s efforts to undermine Nato appear to have backfried, with more than 70% of Finns and about 50% of Swedes now in favour of joining, far higher than before the Ukraine invasion.

Finland shares an 800-mile border with Russia and its decision to join Nato would make the gulf between the West and Moscow even wider.

Boris Johnson is visiting both Sweden and Finland this week ahead of crunch decisions from both countries.

Can the UK really win Eurovision or are we setting ourselves up for disappointment?