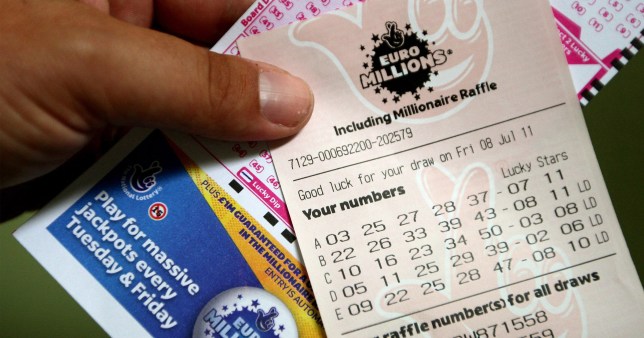 Camelot has urged players to check their tickets (Picture: PA)

A UK ticket holder has won £122 million in the Euromillions draw, making them the fifth-biggest ever National Lottery winner.

Players have been urged to check their tickets after Friday’s jackpot prize was scooped by someone who matched all five Euromillions numbers, as well as the two Lucky Star numbers.

It comes after another UK ticket holder scored £39 million on New Year’s Day.

The biggest-ever UK win was £170 million in October 2019. The winner remains unidentified after choosing to stay anonymous.

Colin and Chris Weir, from Largs in North Ayrshire, became the second-biggest ever winners after scoring £161 million in 2011.

Chris recalled they didn’t sleep a wink the night they won as the Camelot claims line had closed for the night by the time they’d checked their numbers.

The couple used their money to set up the Weir Charitable Trust and made a donation to a community football club in Largs.

They divorced in 2019, shortly before Colin passed away following a short illness.

The record for the highest amount ever won in the Euromillions was set in February 2021, where a Swiss player took home 210 million euros – the equivalent of almost £180 million.

Family’s heartache as teen, 18, who killed 17-year-old pal in horror crash with lorry is spared prison