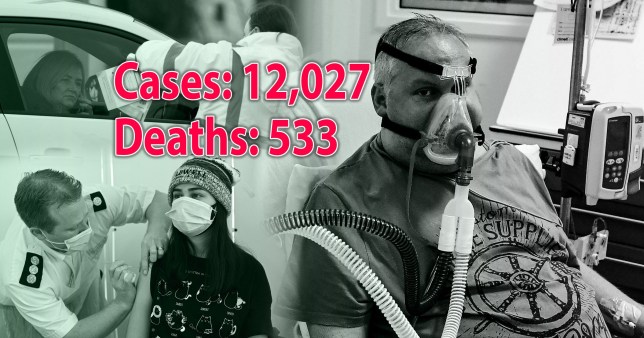 Cases and deaths are continuing to fall ahead of Boris Johnson’s lockdown announcement on Monday (Picture: Metro)

Another 533 people have died with Covid in the UK while there have been 12,027 more cases confirmed in the latest 24 hour period.

Today’s figures show the number of daily deaths and cases has continued to fall as Boris Johnson plans how the UK will exit the third lockdown.

Cases are down 20% compared to last week while deaths have fallen by nearly 28%.

Government figures also showed that a further 452,454 people have had their first dose of the vaccine, bringing the total number of people who have received at least one jab to 16,875,536.

Separately, NHS England has announced the deaths of a further 315 people who tested positive for Covid and died in hospital.

These deaths occurred between April 18 last year and February 18. It’s not known why a death that happened so long ago has been included in today’s figures.

One of those who died was 13-years-old and had no underlying health conditions, NHS England said. 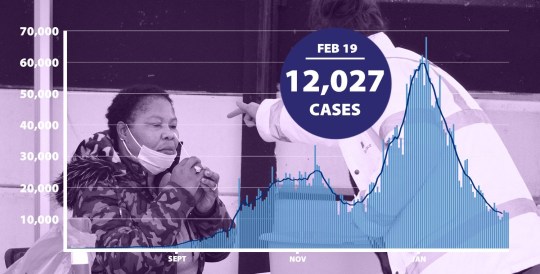 The rapid fall in cases since lockdown began has begun to level off (Picture: Metro)

It comes as the UK’s R number fell again to between 0.6 and 0.9 after falling below 1 for the first time since July last week.

The latest figures will provide further encouragement to the Prime Minister as he spends the weekend working on his plan to ease England’s third national lockdown. 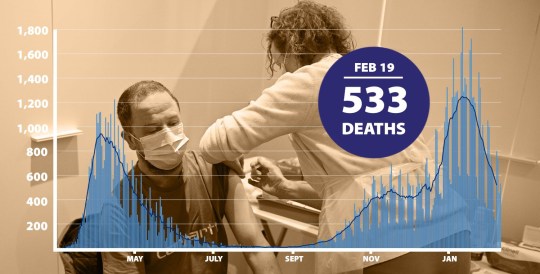 Deaths are still at a high level compared to most of last year (Picture: Metro)

Downing Street has refused to comment on the plan ahead of Monday but the latest reports suggest Brits could soon enjoy picnics in parks with friends.

People will be able to go for coffee on a park bench or enjoy a picnic with someone within their own household or one other person from March 8 onwards, a senior Government source told the Telegraph.

However, mixing of households will still not be permitted either outdoors or indoors, according to the newspaper.