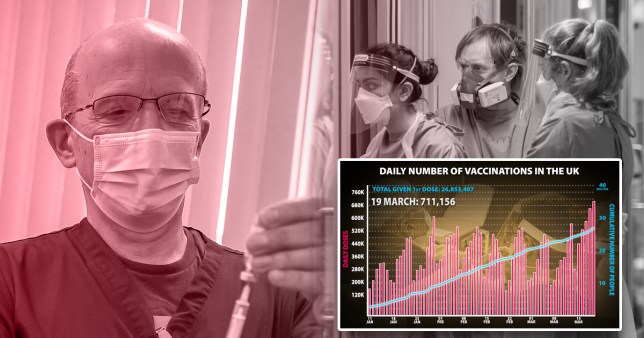 A record number of vaccinations have been carried out today (Picture: Getty/PA)

The UK has broken the record for the highest number of daily vaccinations for the second day in a row.

New figures have shown that more than 700,000 doses were administered yesterday, an increase on the 660,000 doses given out on Thursday.

It comes as another 96 people died within 28 days of testing positive for Covid and a further 5,587 new cases were recorded.

Boris Johnson was among the 636,219 people who received a dose in England on Friday.

The Prime Minister was given his first dose of the Oxford AstraZeneca vaccine at St Thomas’ Hospital in central London, the same hospital where he was previously treated for the disease.

The latest figures also show that NHS staff delivered a record weekly number of vaccines, with more than 2.7 million people receiving the jab over the past seven days.

More than half of the adult population of the country have now had at least one dose of a vaccine, an achievement which Health Secretary Matt Hancock says is the country’s ‘way out of the pandemic.’

The rapid vaccination programme has been credited with reducing the prevalence of the disease across the UK. 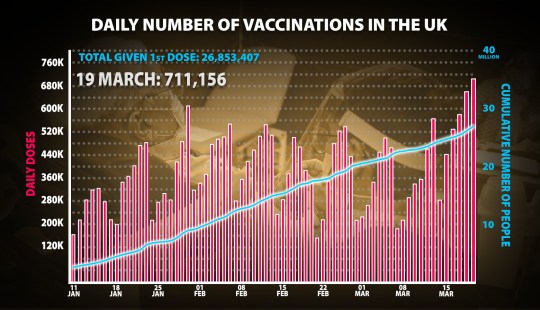 More vaccinations were administered yesterday than ever before (Picture: Metro) 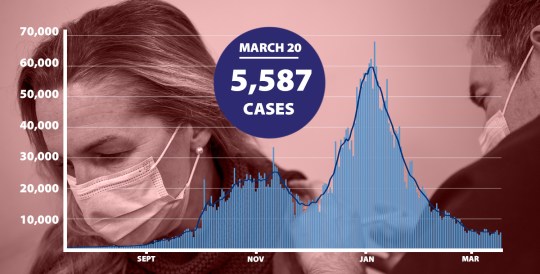 Cases are still steadily declining from their peak in January (Picture: Metro) 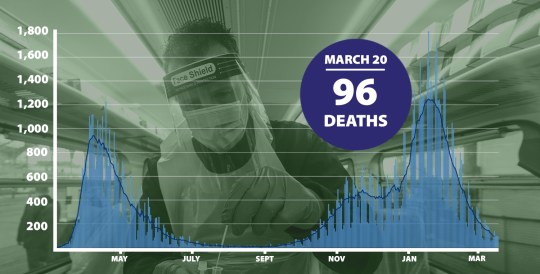 Today’s figures show cases are continuing to fall, almost two weeks after lockdown was eased. There have been 37,451 cases in total in the last seven days, a 7.5% decrease on the week before.

Deaths are down week-on-week by 36.9% while hospital admissions have also fallen by a quarter.

It comes amid fears a third wave of the virus is taking hold in Europe, and could spread to the UK.

Several European countries have gone back into lockdown as cases of the more infectious South African variant have been recorded.

The latest outbreak makes summer holidays abroad ‘extremely unlikely’ according to experts who are warning more travel restrictions may be necessary to protect the country.

Faced with the rapid spread of cases, the EU is trying to restart its faltering vaccination campaign after months of issues.

IR35 tax changes: What are the new rules and who is affected?