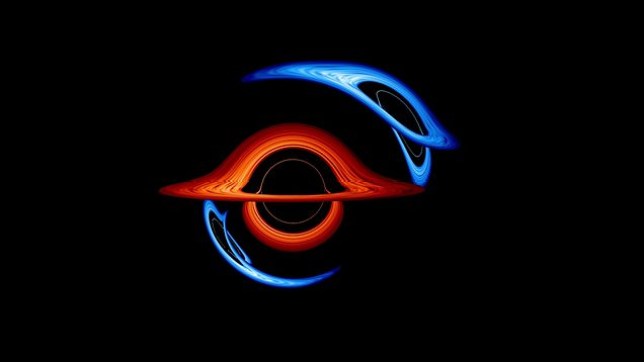 A pair of black holes millions orbit each other in this Nasa visualisation. (Nasa)

When two supermassive black holes orbit one another, they bend and warp light in mesmerising ways.

Now you can watch this strange astronomical dance from the comfort of your own home.

Nasa scientists have made a video showing the weird effects each orbiting black hole has on the light emitted by the other’s accretion disc.

Viewed from near the orbital plane — the flat, round area of space connecting the centres of the black holes — the accretion discs have a double-humped appearance.

As they pass each other, the gravity of the black hole in the foreground distorts the other into a fast-changing series of arcs. The light from both discs warps as it navigates the tangled fabric of space and time near the black holes.

Explaining the video, he said: ‘We’re seeing two supermassive black holes, a larger one with 200 million solar masses and a smaller companion weighing half as much,

‘These are the kinds of black hole binary systems where we think both members could maintain accretion disks lasting millions of years.’

Schnittman gave the discs different colours to make them easier to follow. But his colour choices also reflect the different temparatures of the gas spinning round each behemoth object.

Material rotating around smaller black holes is subject to stronger gravitational effects that produce higher temperatures. Hotter gas gives off light closer to the blue end of the spectrum.

At these masses, most of the light emitted by both accretion discs would actually be ultraviolet, with the smaller blue disc hitting a slightly higher temperature.

The Nasa video also shows a strange phenomenon known as ‘relativistic aberration.’ This makes the black holes look smaller as they approach the viewer and larger as the move away.

This effect disappears when you look at the black hole system from above. Instead, each black hole produces a small image of its orbital partner.

When you zoom in on these smaller images, you can see they are edge-on views. These can can only be produced when light from the black holes is redirected by 90 degrees. 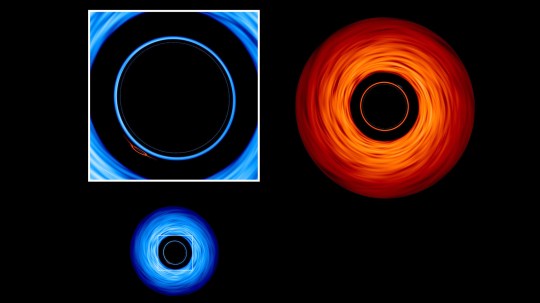 Zooming in on the binary allows you too see the smaller black hole’s distorted image of its larger companion (Credits: Nasa Goddard Space Flight Center/Jeremy Schnittman and Brian P. Powell).

This means you can see the black holes from two different perspectives — edge-on and face-on — at the same time, as illustrated by the picture above.

Schnittman said: ‘A striking aspect of this new visualisation is the self-similar nature of the images produced by gravitational lensing,

‘Zooming into each black hole reveals multiple, increasingly distorted images of its partner.’

Schnittman used a supercomputer to work out the path taken by light rays from the black holes’ accretion discs.

This feat, which took roughly a day, would have taken a normal desktop computer about a decade.