THREE people were stabbed within just eight hours on another night of bloodshed in London.

Two teenage boys and a man remain in hospital following another spate of attacks in the capital last night. 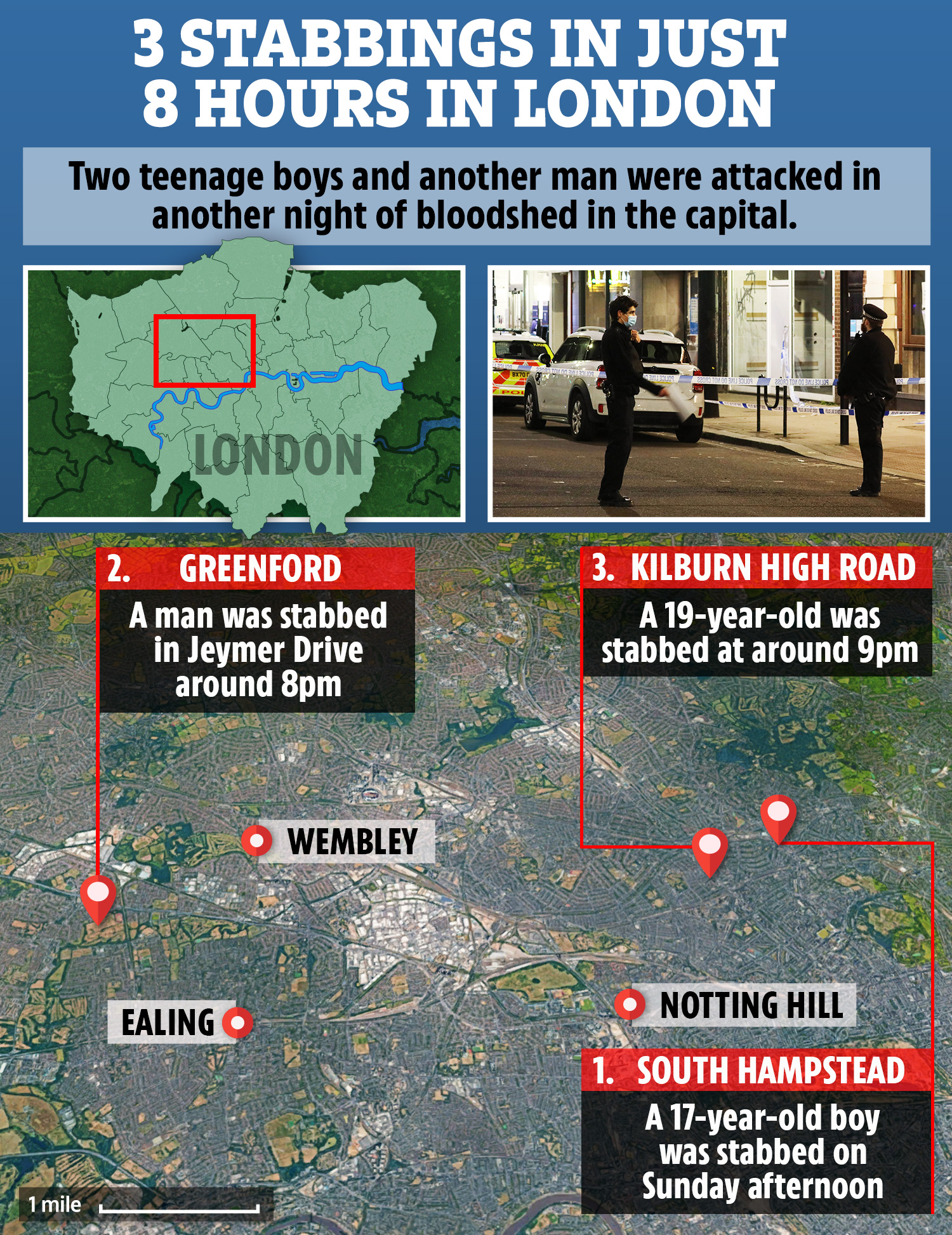 The first knife attack took place at 1.39pm yesterday afternoon, when a 17-year-old boy was stabbed in broad daylight in South Hampstead.

The victim was taken to hospital, though his condition is not believed to be life-threatening.

In a second attack, police were called to Jeymer Drive in Greenford at 8.49pm after a man was found with stab injuries.

He has been taken to hospital, and police have not yet released an update on his condition.

Cops were called the scene at 9.51pm, where a 19-year-old boy was found with stab injuries.

The victim was taken to hospital – but his condition is not believed to be life-threatening.

No arrests have been made in connection with any of the stabbings.

It comes following a spate of knife attacks in the capital recently.

A Sun investigation last week revealed that murders in the capital have hit a three-year high, with the Met launching 18 murder probes already in 2021.

Scotland Yard launched a ‘surge’ in officers out on the streets in a bid to quell the rising tide of violence.

Last week, witnesses told The Sun how a 16-year-old boy was stabbed repeatedly by a gang of thugs armed with zombie knives in Brixton, South London.

Horrified eyewitnesses said four thugs jumped out of a Land Rover and started stabbing the boy who was left fighting for life in hospital.

It came just a day after a man was knifed to death in Tottenham, north London.

Cops named the victim of the murder as 21-year-old Tyreke Watson.

Witnesses said a “tiny teen” ambushed the victim at 4pm outside a Cash Converters on West Green Road – yards from the sport where a 17-year-old was murdered a month ago.

Meanwhile, police have urged anyone with information about yesterday’s knife attack in South Hampstead to call 101 ref CAD 3800/28 Feb.

Cops launch murder probe after teenager, 18, is stabbed to death in Essex