The government and its allies have been criticised for how it pulled out of Afghanistan and left it for the Taliban (Pictures: Reuters/EPA/Mega)

The UK helped to chase the Taliban out of power in Afghanistan in 2001. Two decades later, the militants took it back in a matter of days after Allied forces announced they would be pulling out of the country.

The media has been flooded with devastating stories about desperate citizens going to drastic measures to flee the danger.

Some people grabbed onto the outside of a plane as it took off whilst heartbreaking footage shows parents blindly hand their babies to western soldiers.

These scenes have caused many to criticise the apparent abandonment of the Afghan people and thousands took a stand today.

Crowds gathered outside Downing Street and then took over Oxford Street and Hyde Park.

Men and women carried and wore the Afghan flag while setting off green and red flares in the streets.

One poster read ‘stop the oppression of Afghan women’. Others said the UK should take in more refugees, while another sign warned: ‘This can lead to World War Three’. 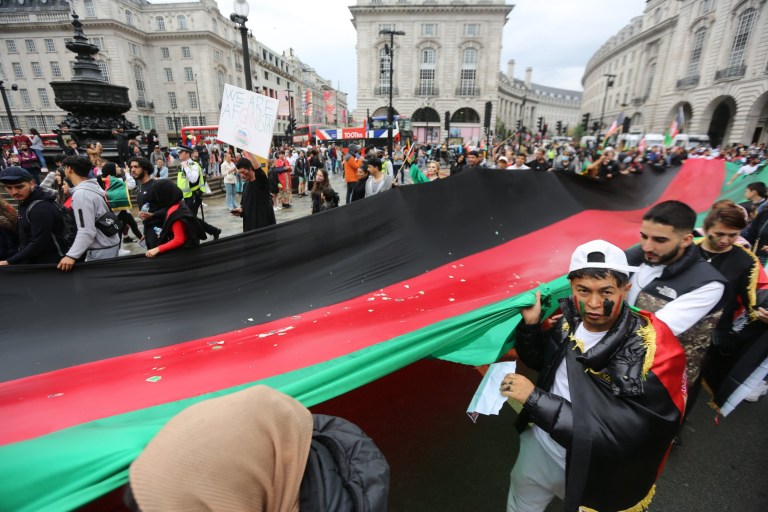 Protestors carried a long Afghan flag through the streets of London, similar to demonstrators in Afghanistan (Picture: Mega) 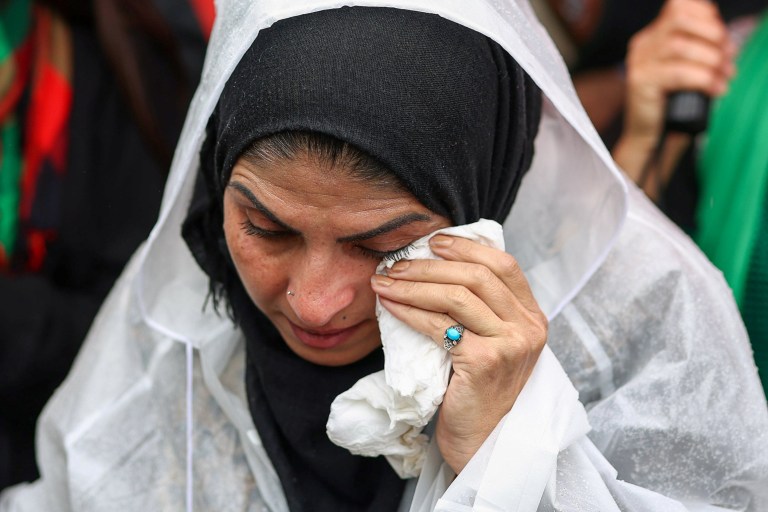 Many people have criticised the US and the UK government for ‘abandoning’ Afgans (Picture: Reuters) 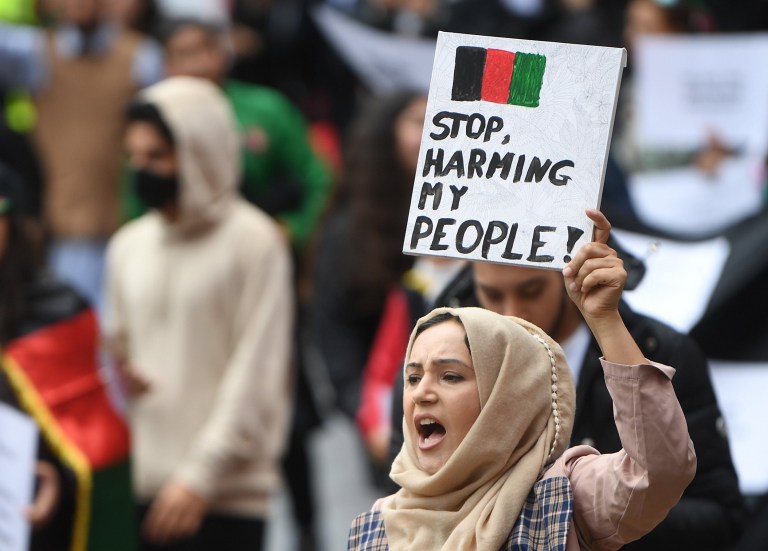 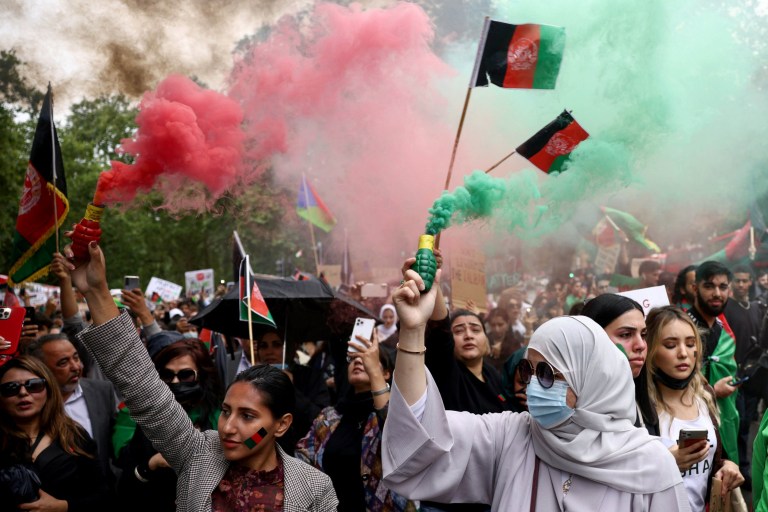 One long banner read: ‘The Talib has not changed’.

This is referring to some reports suggesting the Taliban is not as brutal as it was when it inflicted it harsh version of Sharia law on Afghans before 2001.

When the Taliban last ruled the country, women were all but confined to their homes and suspected criminals faced public executions.

During their five years of power, the death penalty was in place for offenses including female adultery, homosexuality and the rejection of Islam.

But now they have taken different actions, including a promise women will be allowed to study and work ‘within the limits of Islam and a vow not to ‘hold any grudges’ to avoid more war.

Despite this, female news anchors have been banned from appearing on TV, pictures of influential women have been painted over, a woman was reportedly shot dead for not wearing a burqa in public and protestors in Afghanistan have been met with violence and in some cases death. 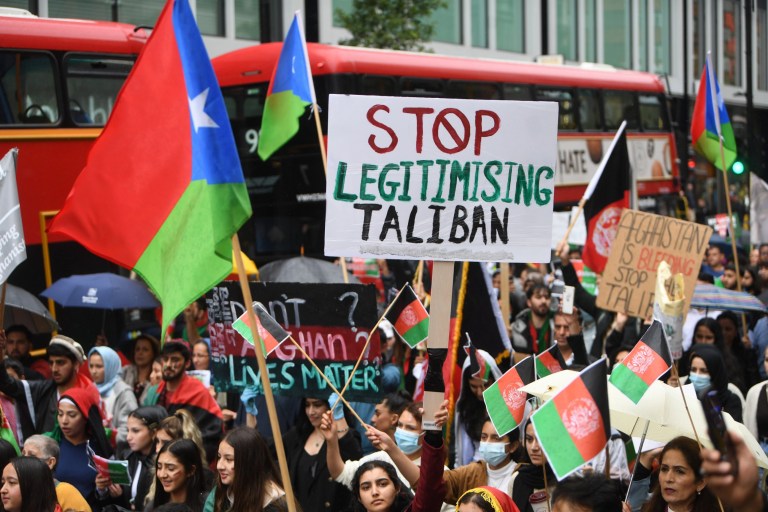 Some signs seemed to be addressing reports that the Taliban has changed now (Picture: EPA) 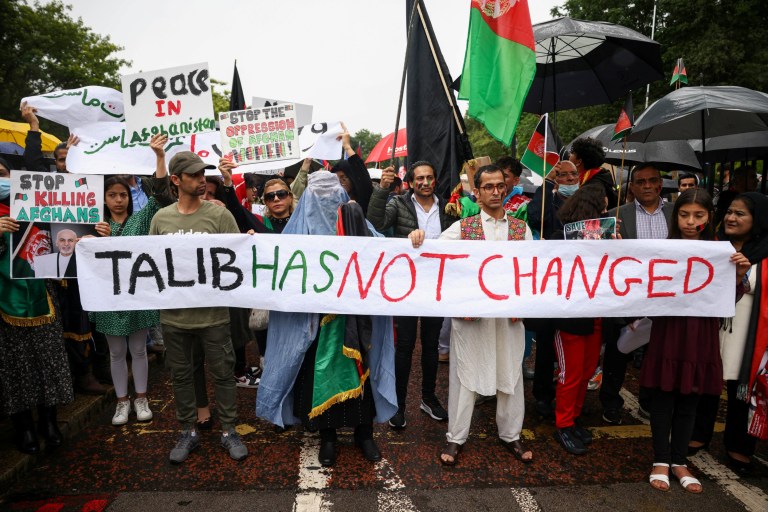 Some demonstrators stressed that they not believe the Taliban was less brutal this time (Picture: Reuters) 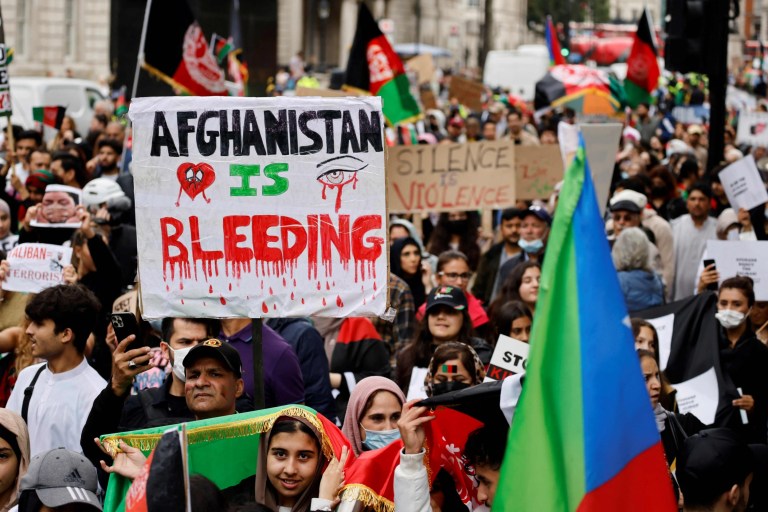 Boris Johnson has promised the UK will welcome 20,000 Afghan refugees ‘long-term’ with up to 5,000 possibly being granted asylum this year.

Many have said this reaction does not do enough to answer the urgency of the emergency on Afghanistan while others worry about whether the UK has the resources to support more refugees.

‘But again, as I said in the House of Commons, and I think that this is the position of everybody from the president of the United States, president Macron of France, Angela Merkel, everybody that I talked to – I just talked to my Dutch counterpart – everybody is agreed that we will judge them on their actions, and that’s the important thing.’

Love Island’s Millie and Liam ‘won’t last’ because they are ‘boring and it’s based on sex’, say fans