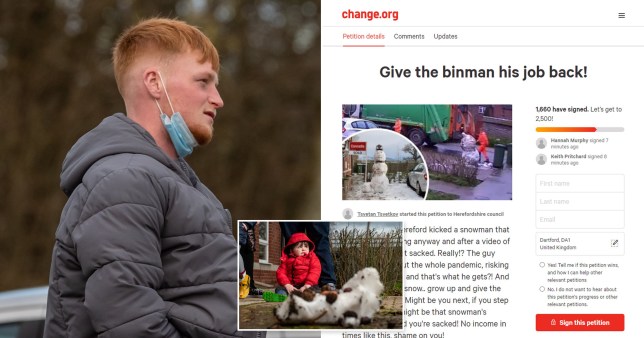 A petition has been launched to get the snowman-kicking binman Callum Woodhouse his job back (Picture: SWNS/Change.org)

Nearly 2,000 people have signed a petition calling for a snowman-kicking binman to be given his job back.

People have rushed to the defence of dad-to-be Callum Woodhouse, 19, and criticised the heavy-handed reaction of Herefordshire Council who banned the agency worker from doing shifts after footage of his actions went viral.

Some have even turned on the family of little Joseph Taylor, 3, who created the snowman in the first place and had to watch from the window as it was destroyed by Woodhouse.

The fast-growing petition states: ‘A binman from Hereford kicked a snowman that was already melting anyway and after a video of it went viral he got sacked. Really!?

‘The guy worked throughout the whole pandemic, risking his own wellbeing and that’s what he gets?! And for what, a pile of snow.. grow up and give the man his job back!

‘Might be you next, if you step in a puddle that might be that snowman’s passed cousin and you’re sacked! No income in times like this, shame on you!’

One of those who has signed commented: ‘What an utterly ridiculous overreaction to fire a man for kicking over a snowman, especially in the middle of a pandemic. The family should be ashamed of themselves.’

Another said: ‘So unfair to sack him, most likely he has a family to feed.’ 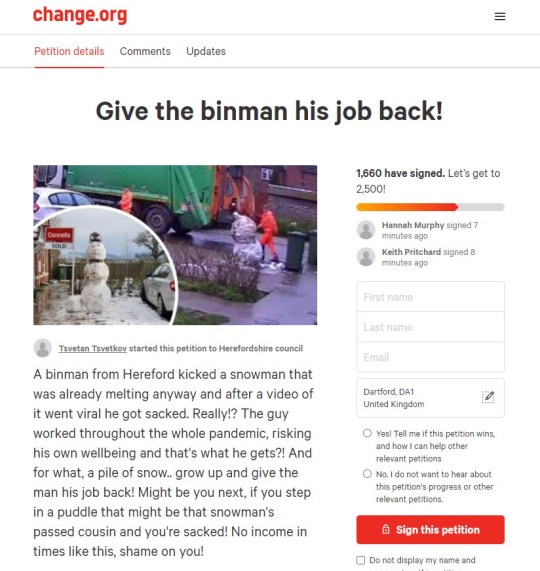 Woodhouse was captured on CCTV kicking the snowman, first in the head and then in the torso as he collected the bins in Tupsley, Hereford on Tuesday.

Joseph, who had spent the Sunday before making the snow creation with his sister and friends, likes to watch the binmen at work and saw the malicious attack unfold.

He rushed to his mum Sophie, 25, who watched the CCTV back with dad, Tom Fallon, 33. 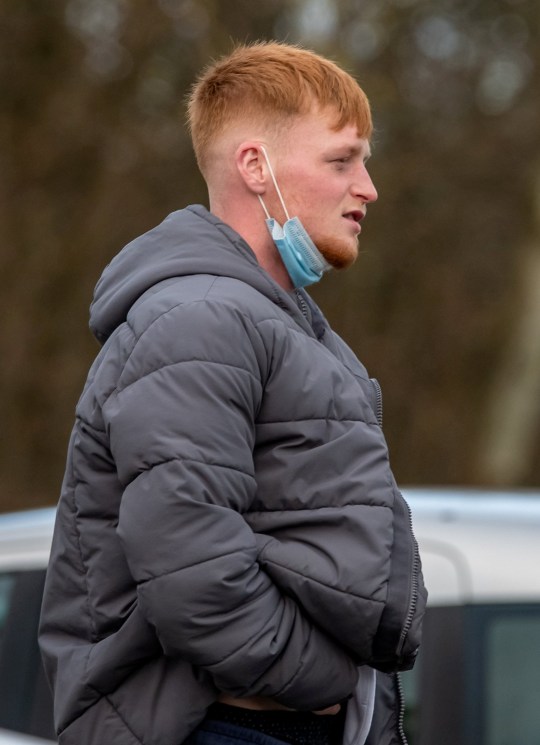 Callum Woodhouse was sacked after he was caught on CCTV decapitating a child’s (Picture: SWNS)

Tom reported the incident to the contractor Woodhouse worked for and Herefordshire council and the binman was let go from the job.

Yesterday, Woodhouse revealed he is now out of work in a pandemic just before he is due to become a dad for the first time.

He said he had tried to apologise to the family but had been blocked on social media. 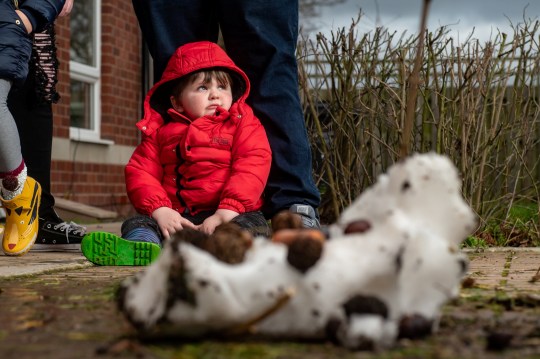 Joseph, 3, watched as his creation was destroyed (Picture: SWNS) 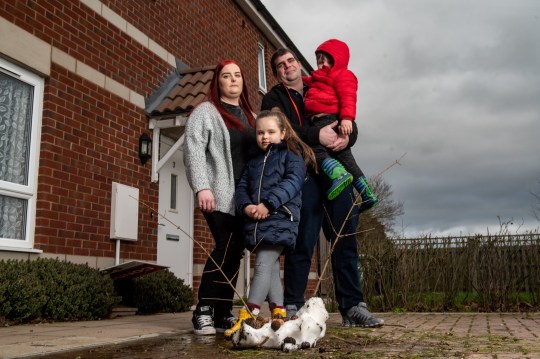 Sophie Taylor, Tom Fallon with Joseph, 3, and Amelia, 6, with the destroyed snowman in Hereford (Picture: SWNS)

A Herefordshire Council spokesman said previously: ‘We are aware of this incident and are disappointed that an individual representing the council would behave in such a manner.

‘The employee was a member of agency staff working on behalf of one of the council’s contractors, and he has been informed that he will not be used again.