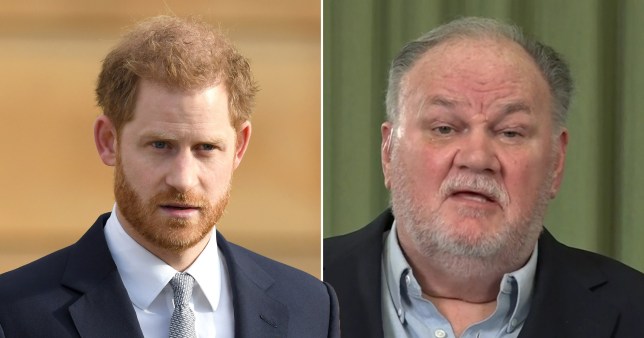 Meghan Markle’s dad hit out at Prince Harry while apologising to his daughter for his behaviour, saying: ‘We all make mistakes but I’ve never played naked pool and dressed like Hitler’.

Thomas Markle spoke of his regret at staging paparazzi photographs ahead of the royal wedding after the Duchess of Sussex admitted she felt ‘betrayed’ by her father in her tell-all interview with Oprah – but moments later, he compared his actions with incidents from Harry’s past.

Speaking to ITV’s Good Morning Britain, Mr Markle said: ‘I wish I hadn’t done the whole thing. But here’s the other side of the coin. No one took any time to protect any member of our family. We were attacked by the press every day.

‘Nobody was there to care for us, nobody looked after us. No one helped us. Then I saw a headline saying they recommended… to Harry and Meghan that someone come and help me, someone come and take care of me and Meghan and Harry denied that and said, “don’t do it,” so I was left out to dry.

‘And in spite of all that, I still apologised, I’m apologising today again… I also said we all make mistakes… but I’ve never played naked pool and I’ve never dressed up like Hitler.’

The Duke of Sussex was forced to apologise after being slammed for dressing in a Nazi uniform at a fancy dress party in 2005.

He said he was ‘very sorry if I caused any offence or embarrassment’ after going out dressed as a member of Rommel’s Afrika Korps, complete with a swastika armband.

Another media storm erupted when he was seen partying naked in his VIP suite in Las Vegas in 2012.

Meghan told Oprah she found it difficult to discuss her father’s actions, adding: ‘I genuinely can’t imagine doing anything to intentionally cause pain to my child.’

However, Mr Markle continued to hit out at the couple in his GMB interview, criticising Harry for a ‘snotty’ comment in 2018.

He said the last time he spoke to his daughter, he was lying in a hospital bed after a heart attack and had text her to say he wasn’t coming to the wedding.

He said: ‘At that point we pretty much said goodbye. Actually, it wasn’t quite goodbye. Harry said to me “if you had listened to me this wouldn’t have happened”.’

Asked about the Oprah interview, Mr Markle said: ‘I’m very disappointed about it. I’ve apologised about this thing, what happened, at least 100 times or so.

‘The bottom line is I’ve never heard back from Meghan or Harry in any way shape or form. When they say that I’m taking advantage of the press well basically what I do, because I haven’t heard from them is I’ll do a story for the press.

‘If I don’t hear from them in 30 days then I’ll do another story for the press.’

He added: ‘When they decide to talk to me I’ll stop talking to the press.’

Bring your seed. Not your need!