The endless search for extra-terrestrial life may have received a boost in the form of a rocky, volcanic exoplanet called Gliese 486b.

The distant world is orbiting a red dwarf star 26 light years away from Earth and has been the subject of a study from astronomers at the Max-Planck Institute in the US.

Gliese 486b is – so far – the only planet detected orbiting this particular star. It’s slightly larger than Earth, with a radius 1.3 times larger than our home.

According to the researchers, the planet has an iron-silicate composition similar to the makeup of Earth. But it’s much hotter. The planet has an estimated surface temperature of 428 degrees Celsius.

The alien world isn’t hot enough to become a lava planet, where the atmosphere is stripped and molten rock runs across much of its surface but it is expected to still have flowing lava. 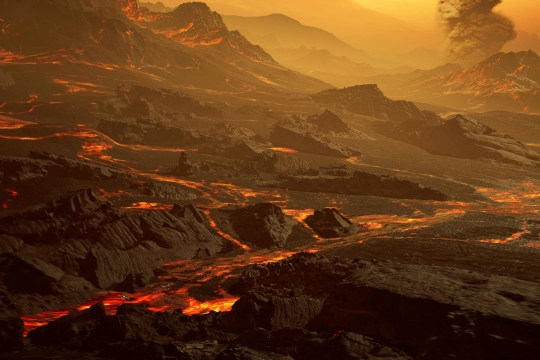 An artistic impression of the surface of the newly discovered hot super-Earth Gliese 486b, with a temperature of about 700 Kelvin (430 degrees Celsius) (AFP)

This prompted astronomers to consider the possibility it may have an atmosphere and could possibly be suitable for life.

They didn’t explain what type of life was likely to live on such a hot planet.

Since Gliese 486b is very near its star (named Gliese 486), it takes only slightly less than 1.5 days to complete an orbit around it. It also lies within the so-called habitable zone of its star.

‘We surveyed about 350 small red-dwarf stars for signs of low-mass planets,’ said Trifon Trifonov, a researcher at the Max Planck Institute and the lead author of the study on Gliese 486b. 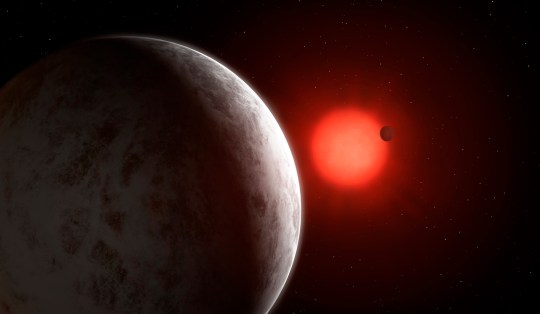 Astronomers believe that Gliese 486b, despite being very very hot, may have its own atmosphere (ESO)

‘The proximity to the red dwarf Gliese 486 heats the planet significantly, making its landscape hot and dry, interspersed with volcanos and glowing lava rivers.’

Trifonov said Gliese 486b is a ‘remarkable discovery, which will likely become the ‘Rosetta Stone’ for atmospheric investigations of rocky exoplanets.’

He is anxiously awaiting the deployment later this year of Nasa’s James Webb Space Telescope. It should allow researchers to zero in on the planet and discover whether it does have an atmosphere and, if so, what its composition is.

And eventually, in a couple of decades, to tell whether there are any traces of life on Gliese 486b.