The life of a refugee is full of pivotal moments.

Going from a child in Afghanistan to an NHS doctor in England, I’ve had many.

I was born into war. Like many Afghan children of my generation, I grew up running from rockets and bombs from the Russians in the late 80s, and then dodging bullets under the warlords and Taliban in the 90s.

I was five when I contracted tuberculosis in a refugee camp. Displaced by conflict, my family and I were living in cramped quarters – 10 to a room – with no running water and a very limited food supply. Outbreak was inevitable.

The local doctor who was treating me gifted me a worn stethoscope and an outdated medical textbook. It ignited a passion to pursue medicine as a profession, however distant or impossible this goal felt at the time.

When it became too dangerous to stay in my homeland, my father sold everything for my plane ticket to a place of safety. I arrived in London as a traumatised 15-year-old, with a shaky command of English, little formal education and $100 in cash in my pocket – all alone.

I started living on Portobello Road with another Afghan refugee who I knew from my home country. I wasn’t granted refugee status immediately – my temporary leave to remain was renewed every few months until I was granted refugee status. That took nearly two years and a lot of uncertainty.

For my safety and survival, I relied on the compassion of strangers. Like the shop owner in Edgware Road named Patrick, who instantly gave me a job, knowing I needed it to support myself and my family in Afghanistan.

I worked long hours in odd jobs in Edgware Road and navigated the strangeness of the Tube and bus, and a city and life so different to anything I had ever seen.

For a long time, I felt that my best option was to work in chicken shops for the rest of life – for many in my position, it was the only option. But I enrolled in school and revised for my A-Levels in the evenings.


I realised that hopes and dreams of safety weren’t the only thing I had brought with me to London (Picture: Waheed Arian)

Quietly brewing inside me was the dream to become a doctor. As a child of conflict, the medics I saw healing bleeding wounds, mending broken bones and saving lives were superheroes to me – and I wanted to be one of them.

As I rebuilt my life, I realised that hopes and dreams of safety weren’t the only thing I had brought with me to London – I had also brought with me the scars of conflict. I began to experience trauma flashbacks.

When waiting at a Tube station platform, the roar of the train rushing through the tunnel would catapult me back into the civil war. The sounds of the soaring rockets, the sight of our home in Kabul reduced to rubble, holding my father’s hand as we fled bullets, stepping over the dead bodies of civilians – it all started coming back to me.

I didn’t receive any help and I wasn’t assessed for my mental health at the time. I wish I was though.

In Britain, our conversations about refugees are often reduced to physical requirements – food, clothes and housing. But we overlook the silent struggles that people fleeing conflict and war go through. For me, this was another pivotal moment.

After earning a place at Cambridge University and finally qualifying as an NHS doctor, I was determined to raise awareness of refugee mental health, and give back – both to the country that gave me sanctuary and enabled me to pursue my dreams, and also to the people of my homeland who were still suffering, just like I once suffered.

Not long after qualifying, I set up the charity Arian Teleheal, which pioneered the use of technology to connect local doctors in war zones with clinicians in the UK, US and other high resource areas.

This exchange of medical expertise demonstrated how important diversity is, and what can be achieved when we work together. But also, it was another way of bridging my Afghan and British identity – the perpetual struggle of a refugee.

This struggle resurfaced recently with the US withdrawal from Afghanistan. I was in between A&E shifts when I heard the news – I went numb hearing about the intense fighting. As my homeland fell to the Taliban, I counselled my father and sisters who still remain trapped in Kabul.

I told them not to panic and to stay put. The lives of my entire family have disintegrated and they have all suffered in many ways. 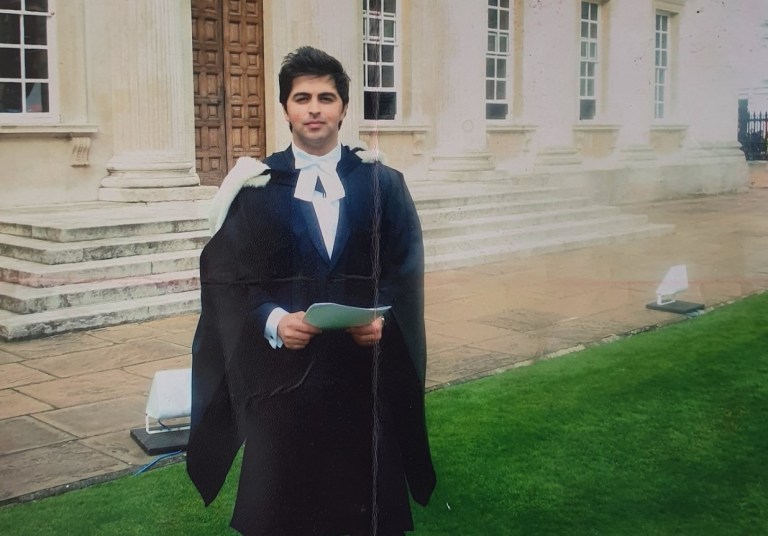 As history repeats itself in Afghanistan, there is a humanitarian and mental health crisis unfolding for the millions who are trapped or displaced.

Britain has a key role to play in addressing this crisis – for both Afghan refugees here and those abroad. The UN has estimated that around 23million people are now facing hunger, including 14million children.

In the harsh Afghan winter, the shortage of medicine, water and shelter are exacerbated. Western countries, who have already spent billions on military intervention, must not abandon people now.

It is incumbent on the British Government to work with aid agencies to deliver humanitarian aid to prevent further deaths.

Furthermore, Britain will need to help provide psychological support to the traumatised Afghans who have fled their homes and are rebuilding their lives here – like I once did.

The mental health needs of refugees post-conflict are often complex, and now include the challenges posed by the pandemic, including isolation and financial hardship. In response to these issues, I founded Arian Wellbeing, a global mental health service provider, which has been drawing insights on refugee trauma.

From the people we have treated – by connecting mental health experts from the UK to medics in conflict zones and providing tips and guidance on how to cope with their mental health issues – it is clear that trauma survivors require a whole mind and body approach to recovery.

I am passionate about addressing the mental health ‘pandemic’ for everyone post-Covid-19 – including refugees. Mental health is a hugely neglected area with fewer resources in the over-stretched NHS.

Britain’s approach to helping refugees must go beyond food and housing if it wants to alleviate suffering and facilitate integration.

The pivotal moments of my life as a refugee were not confined to surviving war and finding physical safety. It was being given the opportunity to work and give back; to feel part of a community.

I was able to rebuild my life and achieve my dreams because of the compassion and support I received from the British people and the Government. Britain must now step up and do the same for the refugees it is responsible for today.