Temporary visas to be given to 10,500 foreign workers to save Christmas from UK supply shortages

The Government is trying to tackle a shortage of HGV drivers and agricultural workers (Picture: Reuters/REX)

More than 10,000 foreign workers will be temporarily permitted to work as lorry drivers and in the food sector to tackle the UK’s supply crisis.

Fears are mounting over a staffing shortage ruining Christmas for families across the country.

A temporary visa scheme will see opportunities created for 5,000 HGV drivers and 5,500 poultry workers to take up employment in the UK until Christmas Eve.

The intervention is part of a bid to keep supermarket shelves stocked with turkeys and toys and counter delivery difficulties at petrol stations.

Transport Secretary Grant Shapps said the changes, with the visas available from next month, would ‘ensure preparations remain on track’ for the festive season.

Retailers warned the Government that it had just 10 days to save Christmas from ‘significant disruption’ due to a shortfall of about 90,000 drivers in the freight sector.

But British Chamber of Commerce president Baroness McGregor-Smith said the changes were the ‘equivalent of throwing a thimble of water on a bonfire” as it would “not be enough to address the scale of the problem’.

The announcement about immigration rules being relaxed to ease supply pressures comes amid scenes of lengthy queues at petrol stations.

This has been caused by a shortage of specialised tanker drivers, which has forced some fuel retailers to shut their pumps and ration sales.

Huge queues at stations are being caused by panic buying, rather than an actual shortage of petrol itself, the AA has said.

But as tensions boil, fighting broke out at a forecourt in Chichester, West Sussex, as drivers waited to fill up. 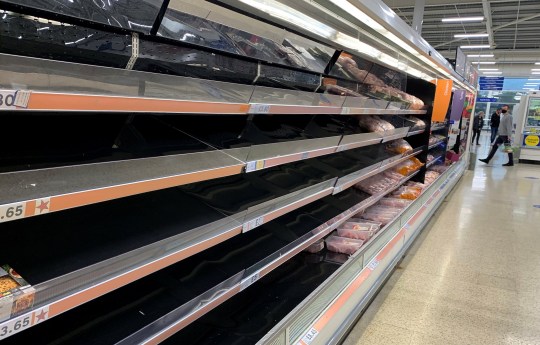 Empty shelves in the meat aisle of a supermarket in Manchester earlier this week (Picture: Reuters)

As well as the short-term measure of opening up to foreign workers, the Ministry of Defence (MoD) is also stepping in to provide examiners for lorry driving tests as ministers look to steadily increase the size of the workforce.

Officials said the loan examiners to work alongside Driver and Vehicle Standards Agency (DVSA) employees would help put on ‘thousands of extra tests’ over the next 12 weeks.

Meanwhile, nearly one million letters will be landing in the coming days on the doormats of people with HGV licences to encourage those who have left the industry to return.

The letter will set out the steps the haulage sector is taking to improve industry conditions, including increased wages, flexible working and fixed hours, according to the Department for Transport (DfT).

Shapps said: ‘This package of measures builds on the important work we have already done to ease this global crisis in the UK, and this Government continues to do everything we can to help the haulage and food industries contend with the HGV driver shortage.

‘We are acting now but the industries must also play their part, with working conditions continuing to improve and the deserved salary increases continuing to be maintained in order for companies to retain new drivers.

‘After a very difficult 18 months, I know how important this Christmas is for all of us and that’s why we’re taking these steps at the earliest opportunity to ensure preparations remain on track.’

The coronavirus pandemic has exacerbated a global shortage of lorry drivers, although there have been long-term issues in the UK with labour numbers amid an ageing workforce, low wages and poor truck stop conditions.

The DfT said it recognised that importing foreign labour ‘will not be the long term solution’ to the problem and that it wanted to see investment poured into establishing a robust domestic workforce. 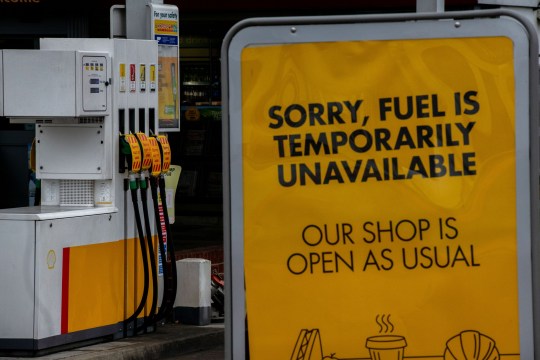 A shortage of HGV drivers has forced some petrol stations to limit its sales (Picture: Getty Images)

Another long-term measure to turn the situation around will see the Department for Education plough up to £10million into creating new ‘skills bootcamps’ to train up to 3,000 more people to become HGV drivers.

Another 1,000 people are expected to be trained through courses accessed locally and funded by the Government’s adult education budget.

Those accessing medical and HGV licences through the adult budget in the 2021/22 academic year will have their qualifications paid for by the state, with the funding backdated to anyone who started one of these qualifications on or after August 1.

More DVSA examiners will also be freed up to conduct lorry driver tests via a law change to allow driving examiners at the three emergency services and the MoD to be able to conduct driving tests for one another.

Education Secretary Nadhim Zahawi said: ‘HGV drivers keep this country running.
“We are taking action to tackle the shortage of drivers by removing barriers to help more people to launch new well-paid careers in the industry, supporting thousands to get the training they need to be road ready.’

Environment Secretary George Eustice said: ‘We have listened to concerns from the sector and we are acting to alleviate what is a very tight labour market.’

The Government said it had already streamlined the process for new HGV drivers while increasing the number of driving tests available to allow for an extra 50,000 tests to take place per year.

‘You have to live it’: Arteta ready to plunge derby debutants into deep end | Arsenal