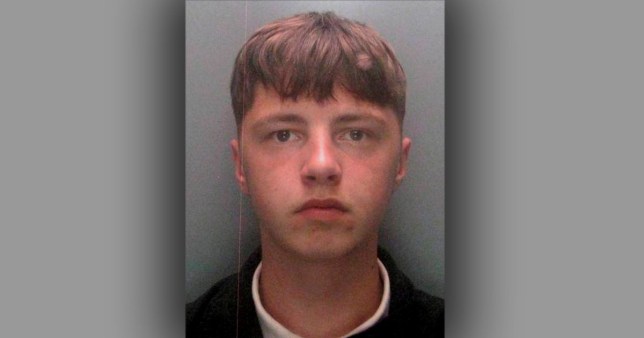 Lewis Walton, 19, has been jailed for seven years after raping a girl (Picture: North News)

A teenager who raped a girl in front of other children has been jailed for seven years.

Lewis Walton was 16 when children watched him violate a girl, who was under 16 years old, at a house party.

The victim was still under 16 when 18-year-old Walton had intercourse with her in a park two years later. He shouted at her ‘I knew I would get it out of you’ after, Durham Crown Court heard.

The attack had a severe impact on the mental health of the victim, who now suffers night terrors and has self-harmed.

She has seen a psychologist for help with her anxiety after finding it difficult to be around other people, Jane Waugh, prosecuting, said.

Walton, now 19, had been drinking before the house party and later texted his victim to warn her against speaking out, the court was told. In police interviews, he denied the messages had been sent by him.

Andrew Stranex, in mitigation, said he ‘was not the mature person he portrayed himself as being’. The defendant had been using drugs and alcohol but has learned to control this, he added.

Judge James Adkin said the victim was raped ‘in pretty unedifying circumstances’ and Walton had made a ‘pretty degrading remark’ after the second incident.

Speaking directly to the defendant, he added: ‘It seems to me you just thought you could do what you wanted, when you wanted.’

Walton, from Crook in Durham, was found guilty of rape and sexual activity with a child after a four-day trial last month.

He was sentenced to seven years behind bars and made the subject of an indefinite sexual harm prevention order.

He will also be subject to registration as a sex offender and a restraining order relating to the victim. Both of these will be in place for life.