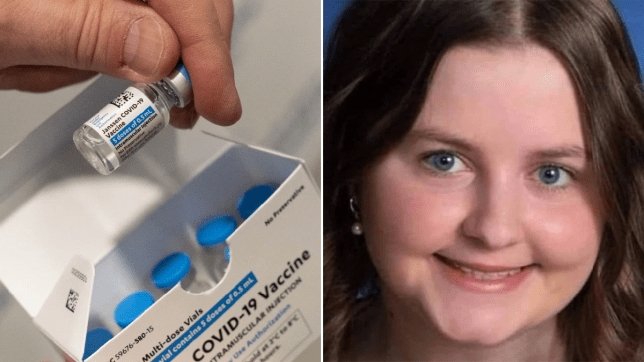 An 18-year-old woman underwent three brain surgeries related to blood clots after receiving the Johnson & Johnson coronavirus vaccine. Emma Burkey suffered seizures after getting the single-dose shot that US officials shelved after she and five other women experienced rare blood clot cases.

Burkey started feeling sick about a week after she got the jab in early April, according to Bret Johnson, a spokesman for her family. The Nevada teen was taken to St Rose Dominican Hospital in Henderson, then airlifted to Loma Linda University Medical Center in Southern California.

The teenager has been taken out of an induced coma as well as a respirator. Her parents Kathy and Russ, who have been making short visits to her daily due to Covid-19 restrictions, said she has a tracheostomy tube that impedes her speech. She is communicating by mouthing some words and blinking.

‘She is improving slowly’, Johnson told the Las Vegas Review-Journal on Monday. ‘The word we got from her parents last night was “slowly, slowly, slowly”’.

One of the five women with blood clot cases from the Johnson & Johnson injection has died.

The US Food and Drug administration (FDA) and Centers for Disease Control and Prevention (CDC) paused the Johnson & Johnson vaccine on April 13 in response to the six severe brain blood clot cases. More than 7.5million people had received the vaccine at the time without incident.

Federal health officials are reportedly leaning toward recommending resumption of the Johnson & Johnson shot, with a warning around rare blood clots. Age restrictions are less likely, according to the Washington Post.

A CDC advisory group is set to convene in a public meeting on Friday that could decide the fate of the Johnson & Johnson vaccine.

As of Thursday, the US has recorded more than 31.8million Covid-19 cases and more than 569,000 deaths, according to Johns Hopkins University’s Coronavirus Resource Center. The nation had administered 216million doses of vaccines as of Wednesday, Bloomberg reported.