A GANG of teens who stabbed a 13-year-old boy leaving him fighting for his life “looked like they were having fun” horrified witnesses said.

The youngster was stabbed repeatedly this morning as he walked to school on the Isle of Dogs in east London close to the Greenwich Foot Tunnel. 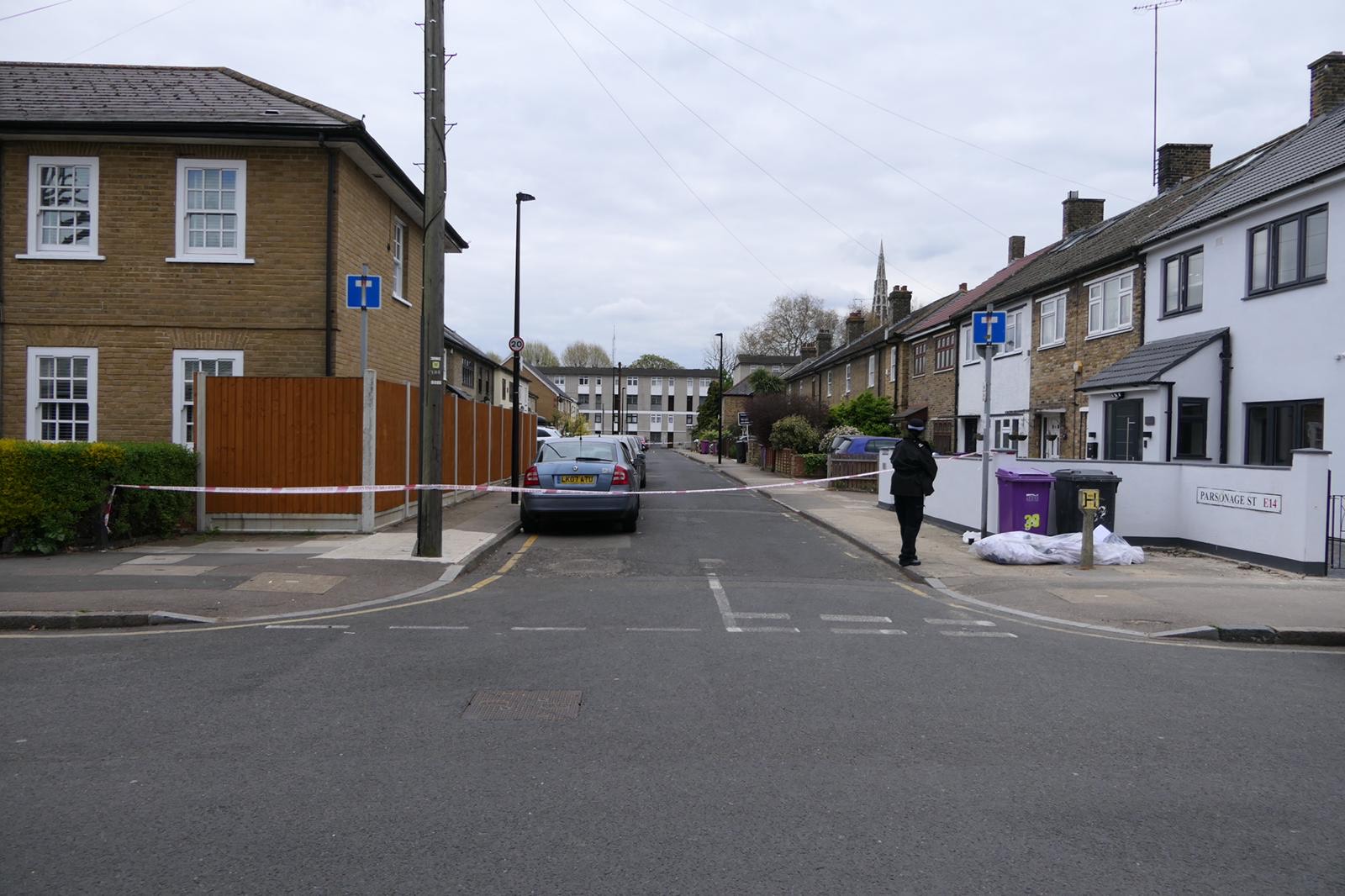 A boy is fighting for life after being stabbed multiple times near a school on the Isle of Dogs in East LondonCredit: @London999 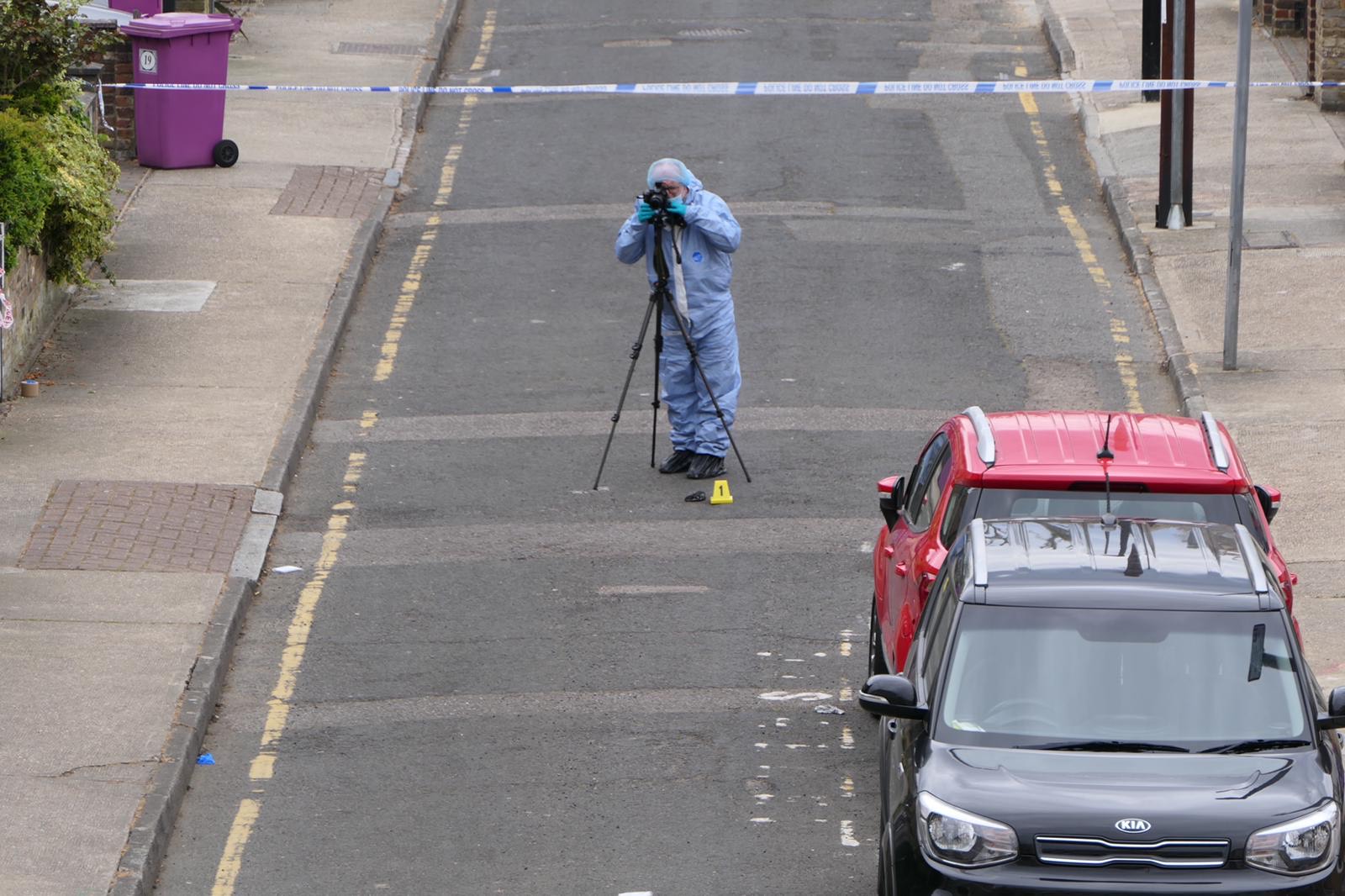 Cops raced to the scene near George Green School on Parsonage Street just after 8.50am this morning following reports of a stabbingCredit: @London999

Cops raced to the scene near George Green’s School on Parsonage Street just after 8.50am following reports of a stabbing.

The boy was taken to a hospital in East London after sustaining multiple stab wounds, and there has been no update on his condition.

A 15-year-old boy has been arrested on suspicion of grievous bodily harm.

He’s been taken to a police station in East London.

Cops are liaising with staff at George Green School, according to the Met Police.

According to residents, brave teachers rushed to the scene and gave the boy CPR after he was repeatedly stabbed near the school gates.

Parsonage Street remains cordoned off by police with a forensic team still conducting a fingertip search.

“I didn’t think anything of it until a helicopter landed in the park and the Old Bill came round.

“The boys just ran round the corner. They were about 13-years-old. 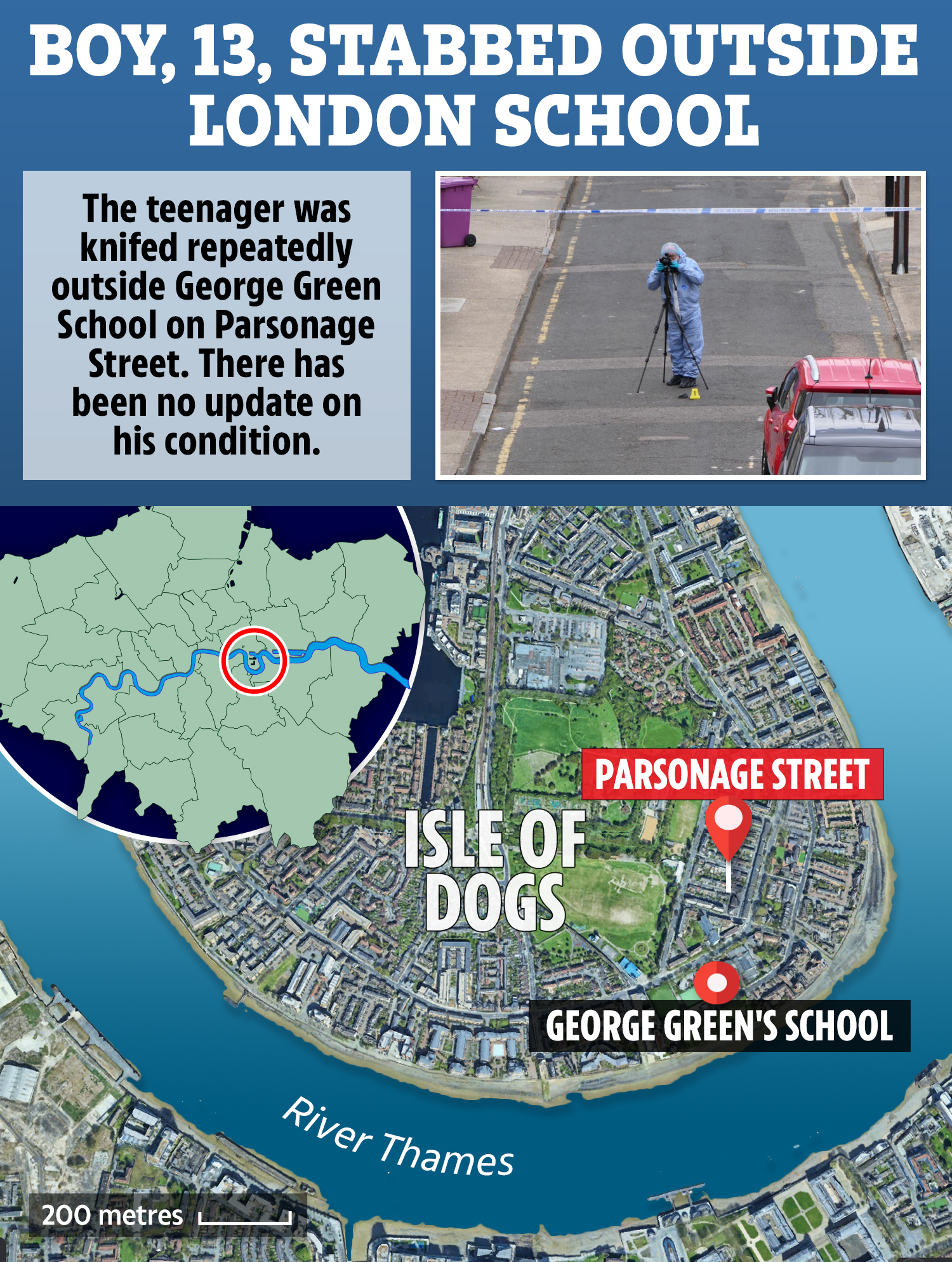 “I don’t think they were in school uniform. It was coats and light coloured trousers or jogging bottoms.”

He added: “There’s always been trouble around here. It’s not abnormal.

“The age groups are getting a bit younger, it’s obviously a lack of discipline at school.

“I’m not overly shocked because of the news all the time. It was bound to happen here eventually.”

Another neighbour, who declined to be named, said: “I saw two boys running down the road, but nothing more than that.

“They didn’t look like they were wearing school uniform or anything like that, just casual stuff. They looked young – early to mid teens.

“I didn’t think anything of it until the helicopter touched down in the park – that was a bit of a surprise.

“It’s heartbreaking, but it’s not surprising. You’ve just got to hope the little boy is okay.”

A nearby neighbour to the scene said she had heard from a friend who lives on Parsonage Street that teachers rushed from George Green’s School to aid the boy.

The woman, who declined to be named, said: “I heard from someone on the street that they saw teachers trying to help the kid. One was giving him CPR.

“I think they got some response, but obviously there wasn’t much they could do until paramedics arrived.”

A spokesperson for the school this afternoon confirmed to MyLondon that the victim was a student.

Meanwhile, a schoolbag was also seen by witnesses on the pavement – with forensic officers closely examining the item this morning.

It comes after a spate of stabbings in London this year.

Junior Jah, 18, was found knifed to death near his home in Canning Town, East London, on Monday afternoon. There is no suggestion that it is linked to today’s incident.

Junior was the 12th teenager stabbed to death in London in 2021 – just five less than there were in the whole of 2020.

So far this year there has been 32 murder investigations launched in London, and of those, 25 have been stabbings.

Junior was attacked just minutes away from where Fares Maatou, 14, was stabbed in the head outside a pizza restaurant while defending his friend last week.

Referencing today’s incident, a Met Police spokesperson said: “Police were called by the London Ambulance Service at 8.50am on Thursday, April 29 to reports of a stabbing on Parsonage Street, E14.

“He has been taken to an East London hospital; we await an update on his condition.

“At this early stage, there have been no arrests. A crime scene remains in place.

“Anyone with information is asked to contact police via 101 quoting reference Cad 1321/29Apr.”

My lover of six months has a girlfriend