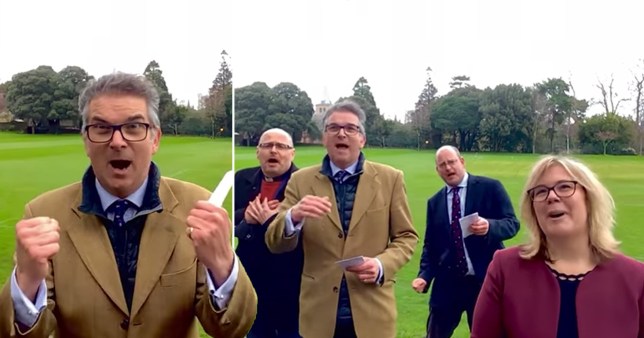 The teachers got together to belt out their own version of the iconic ballad (Picture: King’s Rochester/Youtube)

As teachers prepare to welcome back pupils after months apart, it appears some are feeling particularly watery-eyed about the much-anticipated reunion.

One group of teachers have come up with a creative way of letting children know just how much they’ve been missed – by recording a parody of Take That’s ‘I Want You Back For Good’.

Four teachers from The King’s School in Rochester penned their own version of the iconic ballad and took to the school’s playing fields to belt their hearts out.

The video, which has been watched by almost 5,000 on YouTube, features headteacher Ben Charles, the prep school’s head Tom Morgan and head of nursery and pre-prep school Catherine Openshaw.

Father Padfield even makes an appearance for the tear-jerking chorus as the group belt out ‘we want you back for good’.

Stood in an empty playing field dressed in their best, the group sing: ‘Whatever we said, whatever we did, we’ve been through it, we just want you back for good.

‘We’ve carried you along, we’ve had to be strong and we’ve done it, you’ll be right and understood.

‘We’ll be together, fingers crossed now forever, we’ll be fighting and forever we will be, so complete in our hope, we will never be locked down again.’

The video was released ahead of pupils returning to the classroom on Monday for the first time since January.

All schools in England will reopen as part of the first phase of the Government’s easing of lockdown rules.