A cabbie who deliberately drove a minibus at a cyclist who had criticised his driving faces a jail sentence.

Charles Yorston, 60, ‘jerked’ his vehicle to the right just as Andrew Learmonth drew level with his window.

The resulting impact sent Mr Learmonth, a prison officer out for an evening ride, into mid-air.

Tangled in the wreckage of his bike, he was thrown right across the road and struck his head on the far kerb, cracking his helmet and leaving him with cuts, bruises, and a fractured right elbow that still causes him pain nearly three years later.

A sheriff in the case in Scotland said he was lucky not to have been killed.

Mr Learmonth, 31, told Falkirk Sheriff Court that he had ridden alongside the eight-seater Ford Tourneo  minibus, which was slowing to drop off passengers at the Oxgang Hotel, Grangemouth, because he believed the driver had ‘cut him up’ at nearby traffic lights.

He hit the rear quarter-panel with his hand to get the driver’s attention, and admitted he had shouted, ‘What the fuck are you playing at? You nearly put me into the back of that car.’

He said he ‘wanted to make the driver aware of what he had done’. 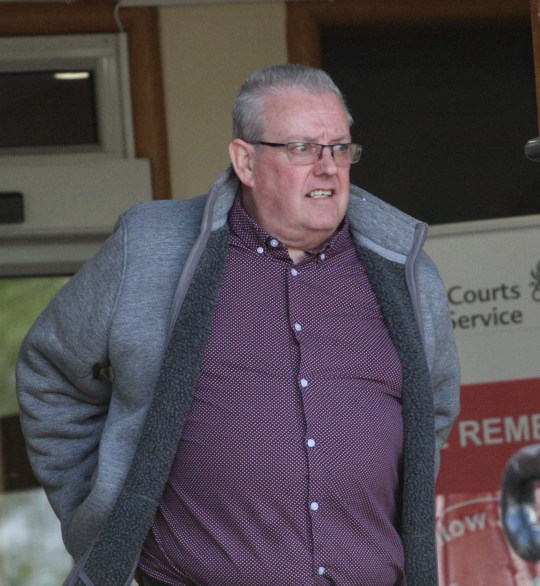 He said: ‘I can recall looking in the driver’s eyes and seeing the look of anger in his face.

‘I saw the beginning of him turning the steering wheel towards me.’

Passengers in the minibus, who were about to be dropped off for a family function, said Yorston, who had just told Mr Learmonth to ‘f**k off’, then ‘jerked the wheel with an unnatural movement’ just as Mr Learmonth was alongside, causing the minibus to take a sudden turn to the right at about 10 miles an hour, knocking Mr Learmonth straight off his bike and onto the other lane.

Challenged by witnesses to the incident who asked him ‘what the were you playing at?’, Yorston asked, ‘why would I jeopardise my job?’

Then he complained he was losing money as he had to wait around after the collision.

After a two-day trial, a jury found Yorston, a taxi driver for 19 years and now a call centre worker, guilty of causing serious injury by dangerous driving.

Father-of-two Yorston, of Falkirk, had denied the charge and insisted he had not been trying to scare Mr Learmonth.

Prosecutor Sarah Smith said he had acted intentionally because he had lost his temper.

Sheriff Derek Hamilton imposed immediate disqualification – the length of the ban to be set later – and deferred sentence until June 29.

He said: ‘The jury found you deliberately drove at Mr Learmonth.

‘It is fortunate that the consequences were not more tragic. This could easily have resulted in a fatality.’

He condemned Yorston for driving on after hearing the initial ‘thud’ at the back of his cab, caused when Mr Learmonth hit it with his hand.

He said: ‘Your attitude to driving almost beggars belief – that something could hit the back of your vehicle and you would think nothing of it.

‘Your attitude was not to bother, not to stop. This was a terrible episode of driving, from start to finish.

‘Given the nature of the driving and your complete lack of remorse or acceptance of any blame, I really have to consider a custodial sentence.’

How Chelsea lined up in Roman Abramovich’s first game 19-years-ago and where are they now, including Mikael Forssell