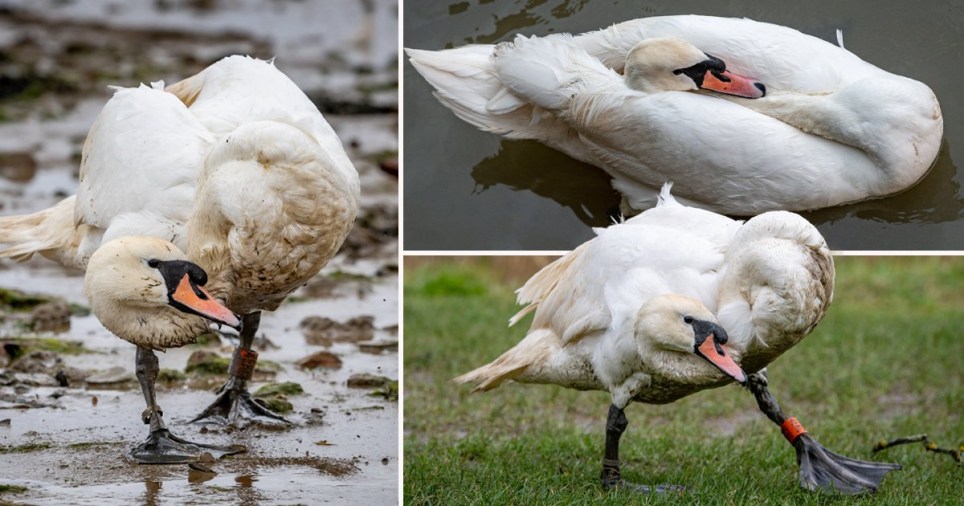 Another swan is believed to have crash landed on Wonky in November (Picture: SWNS)

A unique swan has been nicknamed ‘Wonky’ by wildlife rescuers, after a clumsy member of his flock crash-landed on him and injured his neck.

Now the unusual-looking Essex bird seems to be missing out on love ahead of the breeding season – but experts have eased local concerns about his health.

The sight of him waddling with his neck spiralling sideways and his head lolling to one side sparked fears for his welfare among walkers, who called for help.

But Wonky was left unamused at being taken from the flock when medics swarmed in to check up on him. After being checked over by wildlife experts and a vet, the feisty male was given the all clear and told he is just a bit out of shape.

He has now returned to his flock with his deformed neck, which experts believe is the result of an old injury.

It is thought that the bird suffered a broken neck or damage to tendons in November 2020 at his home on the banks of the River Stour estuary when another animal flew int him.

However, with breeding season coming up, the male swan – a cob – is now facing the rest of his flock pairing off around him – whilst he is still largely seen on his own. 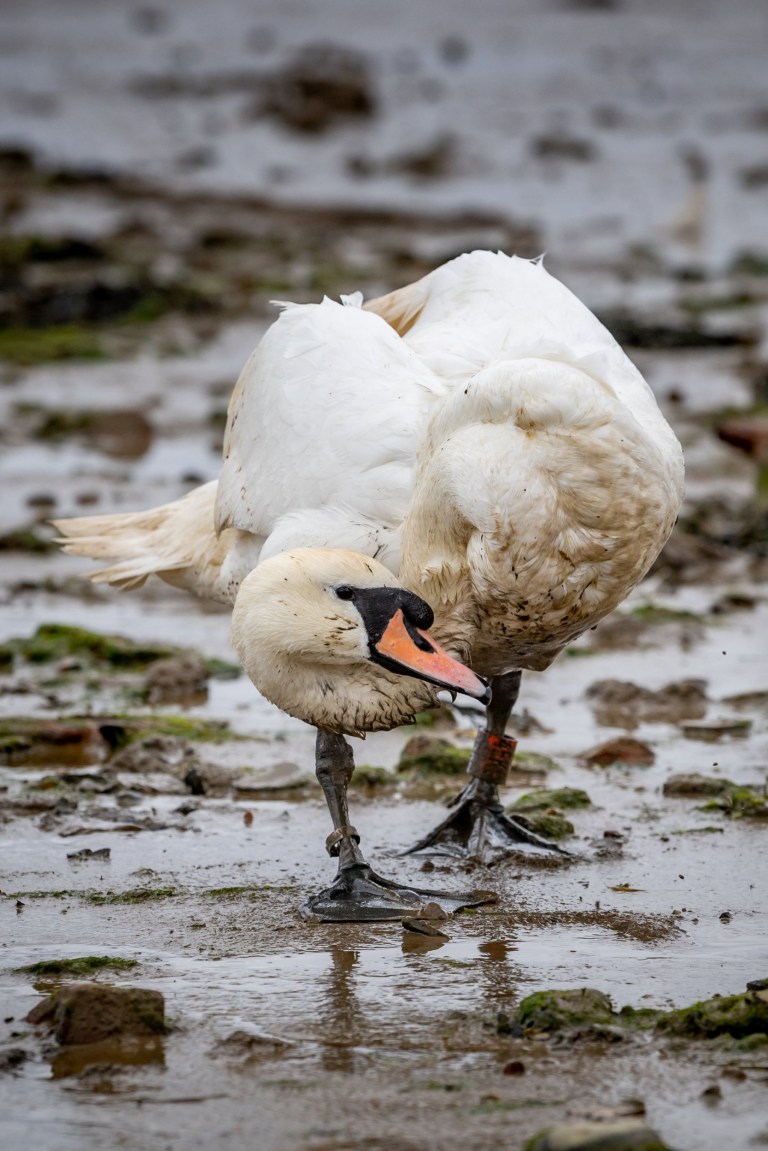 Members of the public have been raising concerns about Wonky (Picture: SWNS) 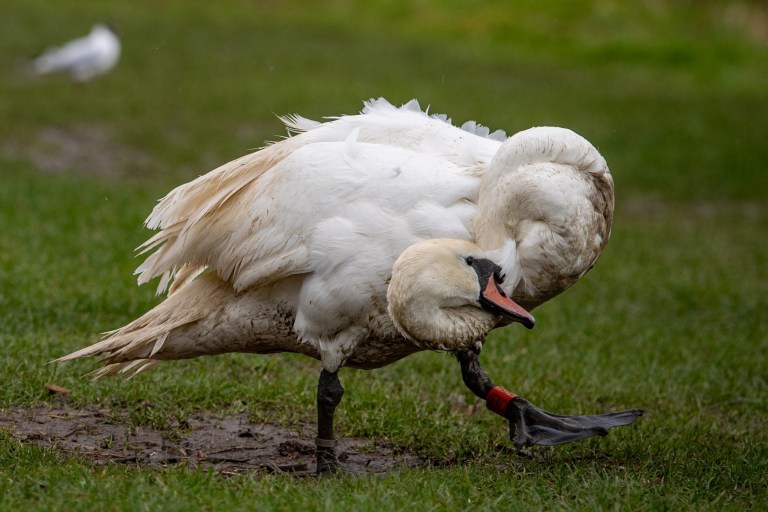 The swan is in good health, experts say (Picture: SWNS) 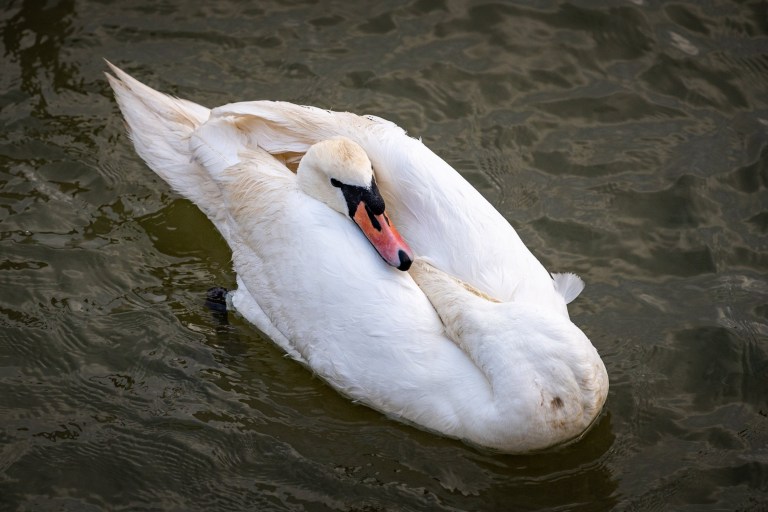 Wonky is just a bit out of shape from an old injury (Picture: SWNS)

Gill Lewis, founder of WeCare Wildlife Rescue in Manningtree, close to where Wonky and his flock can be found, took in the unusual-looking mute swan this week to monitor him overnight.

But the 56-year-old said that Wonky was ‘not very happy’ to be taken away, so they made the decision to release him back into the estuary in Mistley.

Gill explained: ‘It’s a difficult one, because we’ve had lots of reports from members of the public raising concerns over Wonky’s wellbeing.

‘I took him in and had him in my garden for a couple of days and overnight so that I could take him to the vet and get him checked over.

‘The vet checked his neck and he is fine – although carrying an old injury, it is not broken.’ 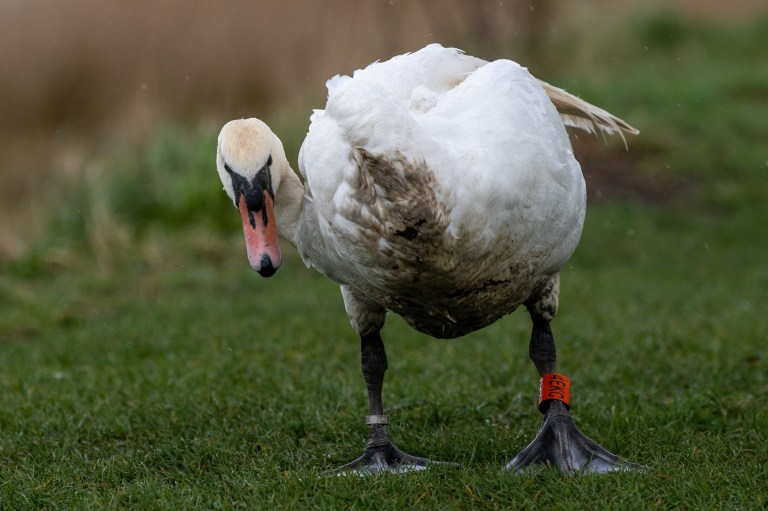 The male bird seems to be struggling to pair up ahead of mating season (Picture: SWNS) 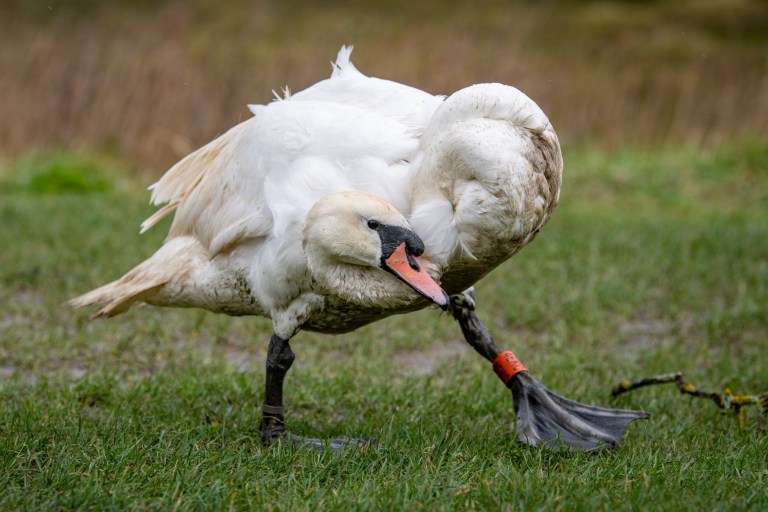 Wonky got a bit feisty when taken away from the rest of his flock (Picture: SWNS) 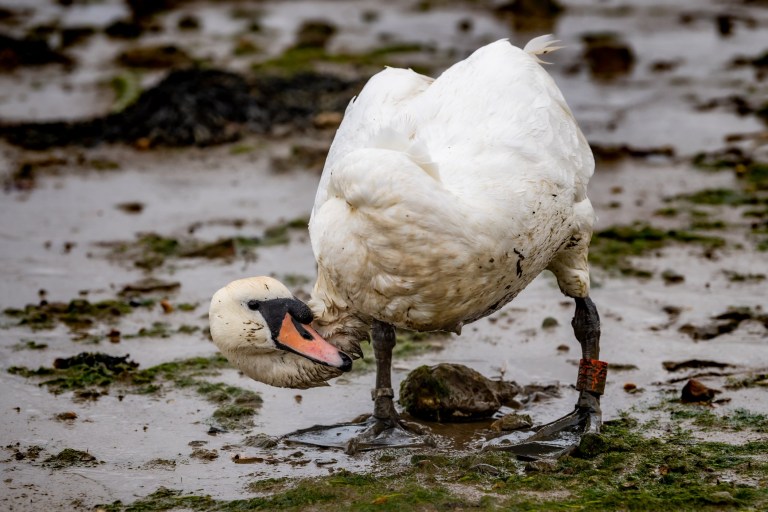 He lives on the River Stour estuary in Essex (Picture: SWNS) 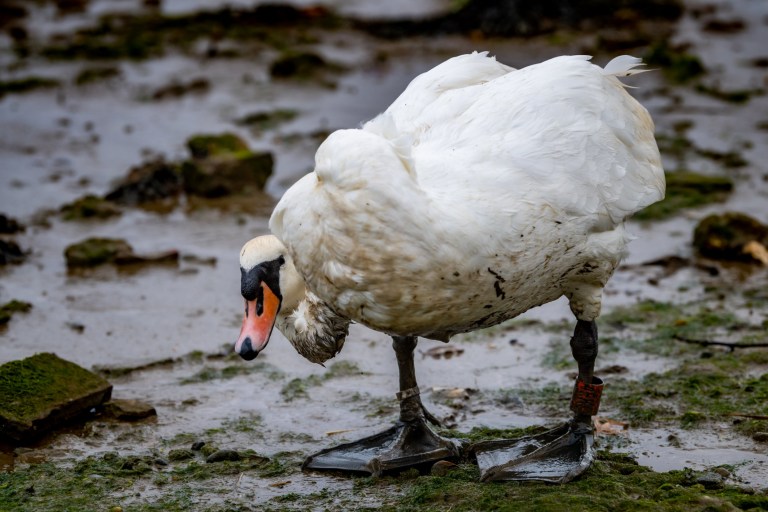 Wonky can hold his own at feeding time, observers say (Picture: SWNS)

She continued: ‘We think that when the reported crash-landing incident happened back in November he must have either suffered a break or damage to a tendon, and it has just healed like this.

‘Other than this, his wings and legs are all ok and he is alert and feisty.

‘He was quite angry about being taken away from his flock – he certainly gave my dogs the back-off treatment with lots of aggressive hissing!’

Gill added that the swan looks ‘a bit like a Halloween costume’ when he walks along with his head hanging down to one side.

But she said: ‘We decided it would be the most fair thing to release him back with the rest of the flock in Mistley.’

Gill added that volunteers from WeCare Wildlife Rescue, and the charity SwanWatch, have been taking it in turns to give extra feeds to the swans twice a day.

She said: ‘They’re a wild flock but they’re on the tame side, and we’ve been giving extra feed to them since November, as the flock was not looking in the best of health.

‘Every time we look out for Wonky, he looks odd with his head resting on his back between his wings.

‘But he happily joins the feeding scrum and can hold his own. He can still extend his neck fully to feed and to defend himself. We’ve even seen him fly.

‘We will continue to monitor him and give him extra feed. With luck, he’ll find a mate and live a long and happy life.’