WHEN John Major began a meeting of his war cabinet one snowy February morning, he was not expecting to end it diving under a table in fear for his life.

But 30 years ago this Sunday, our then Prime Minister would do just that. 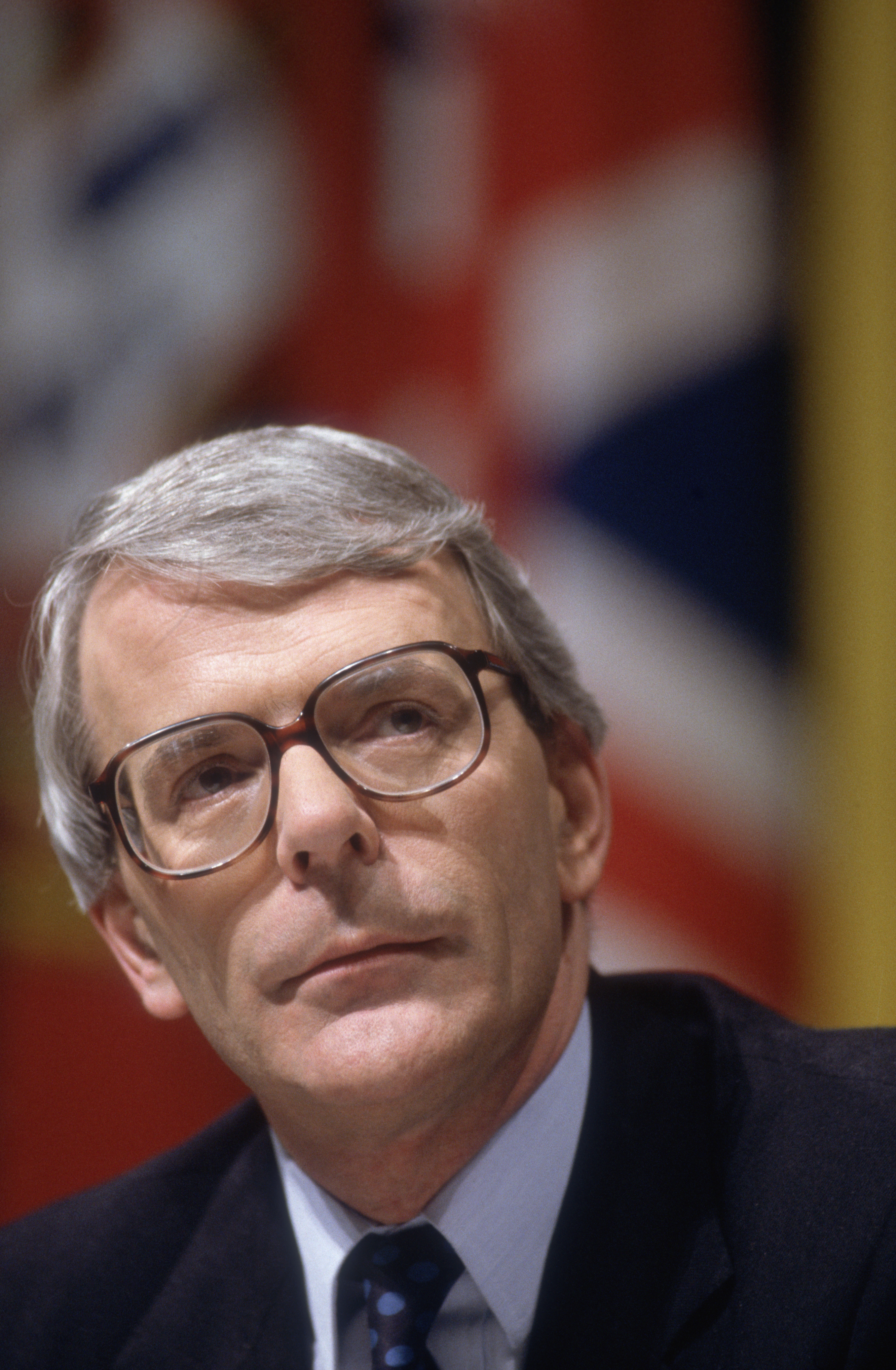 The IRA’s mortar attack on the home of the Prime Minister John Major was one of the most audacious assassination attempts in British history.Credit: Getty Images – Getty

Moments after he uttered the word “bomb”, a very real one exploded yards from the gathering in the heart of 10 Downing Street, forcing him and his colleagues to take cover.

It was just after 10am on February 7, 1991, when all hell broke loose — minutes after the start of the tense Cabinet Room meeting to talk about the ongoing Gulf War.

As Mr Major and colleagues discussed a possible Iraqi terror attack on London, a mortar shell exploded with a deafening bang in the Downing Street garden.

But this was not an Iraqi bomb — it was the latest attack by the IRA.

Lord Robin Butler, then head of the Civil Service, was sitting near the Prime Minister.

He recalled: “My first reaction was that this was a terrorist attack and some guys with sub-machine guns were going to appear and spray us all with bullets.

John Major had just used the word ‘bomb’ and there was this large explosion.

“I dived under the table — so, I recall, did John Major — and probably others as well.

“We were talking at the time, curiously enough, about a possible terrorist attack organised by Saddam Hussein in London.

“My recollection was that John Major had just used the word ‘bomb’ and there was this large explosion.

“The windows of the Cabinet Room didn’t shatter because they had a sort of protective film on them, but the French windows at the end of the room blew in.” 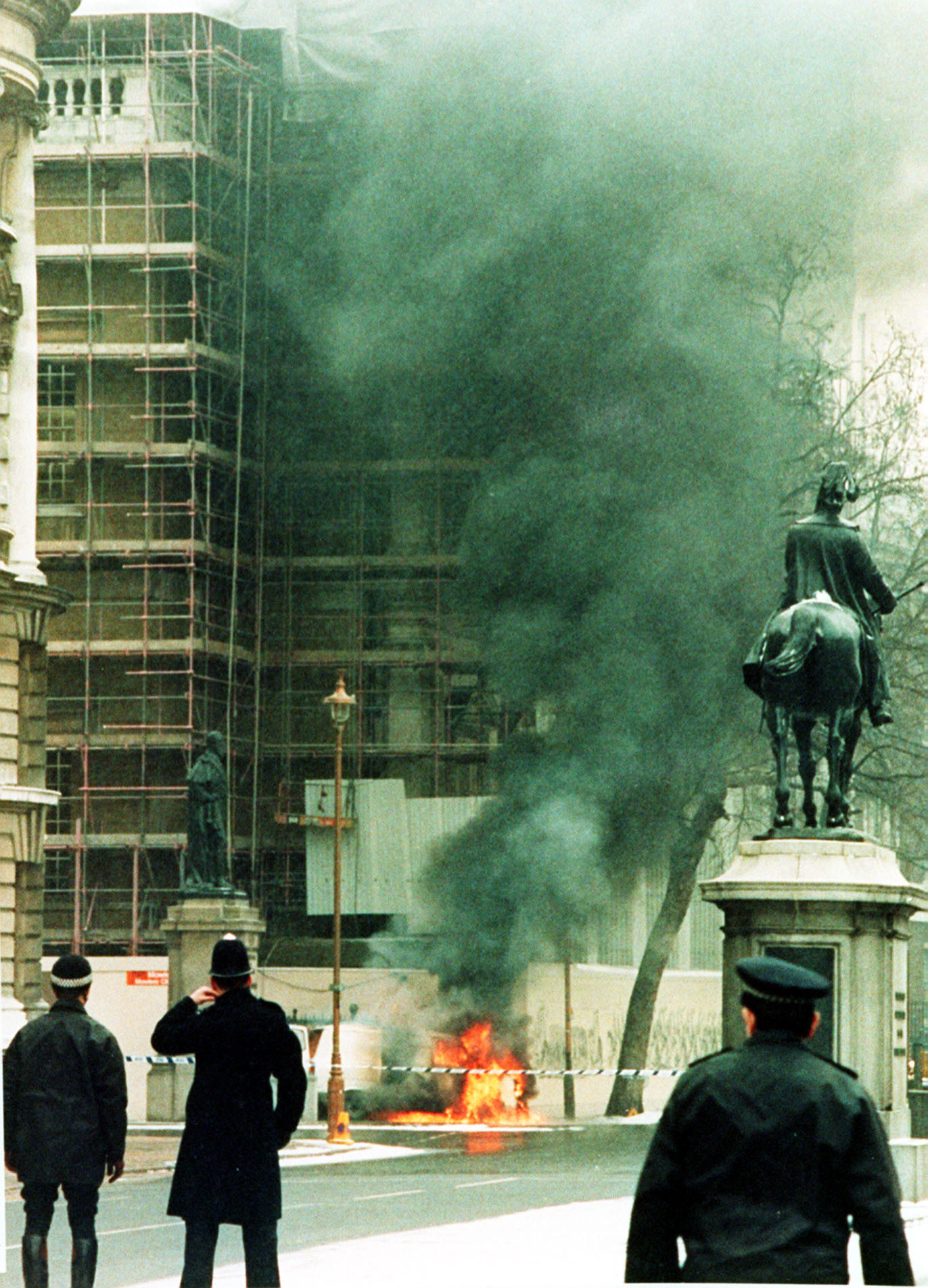 He explained that it was his “second-closest shave” as he was in the room with Margaret Thatcher during the 1984 Brighton bomb.

The IRA’s mortar attack on the home of the Prime Minister was one of the most audacious assassination attempts in British history.

What marked it out as most troubling was the ease with which the IRA was able to stage the offensive.

Terror expert Martin Dillon, who wrote about his experiences reporting on the IRA in his book Crossing The Line, said it caught British security services totally unawares.

He explained: “What’s surprising is, when you consider how well- penetrated the IRA was by the intelligence services, no one picked this up.”

It had snowed heavily on the morning of the attack.

What’s surprising is, when you consider how well- penetrated the IRA was by the intelligence services, no one picked this up.

Members of the Provisional IRA parked a van on Whitehall outside Banqueting House, around 200 yards from Downing Street.

In the back, three home-made mortar cylinders were angled to fire four-foot shells stuffed with plastic explosives through a hole cut in the van’s roof at No 10.

The van was also rigged with an incendiary device to destroy any evidence after the mortars had fired.

Once everything was in place, the terrorists fled and, at 10.08am, the bombs were launched.

Two shells overshot Downing Street and landed on a green by the Foreign Office — one exploding while the other failed to go off. 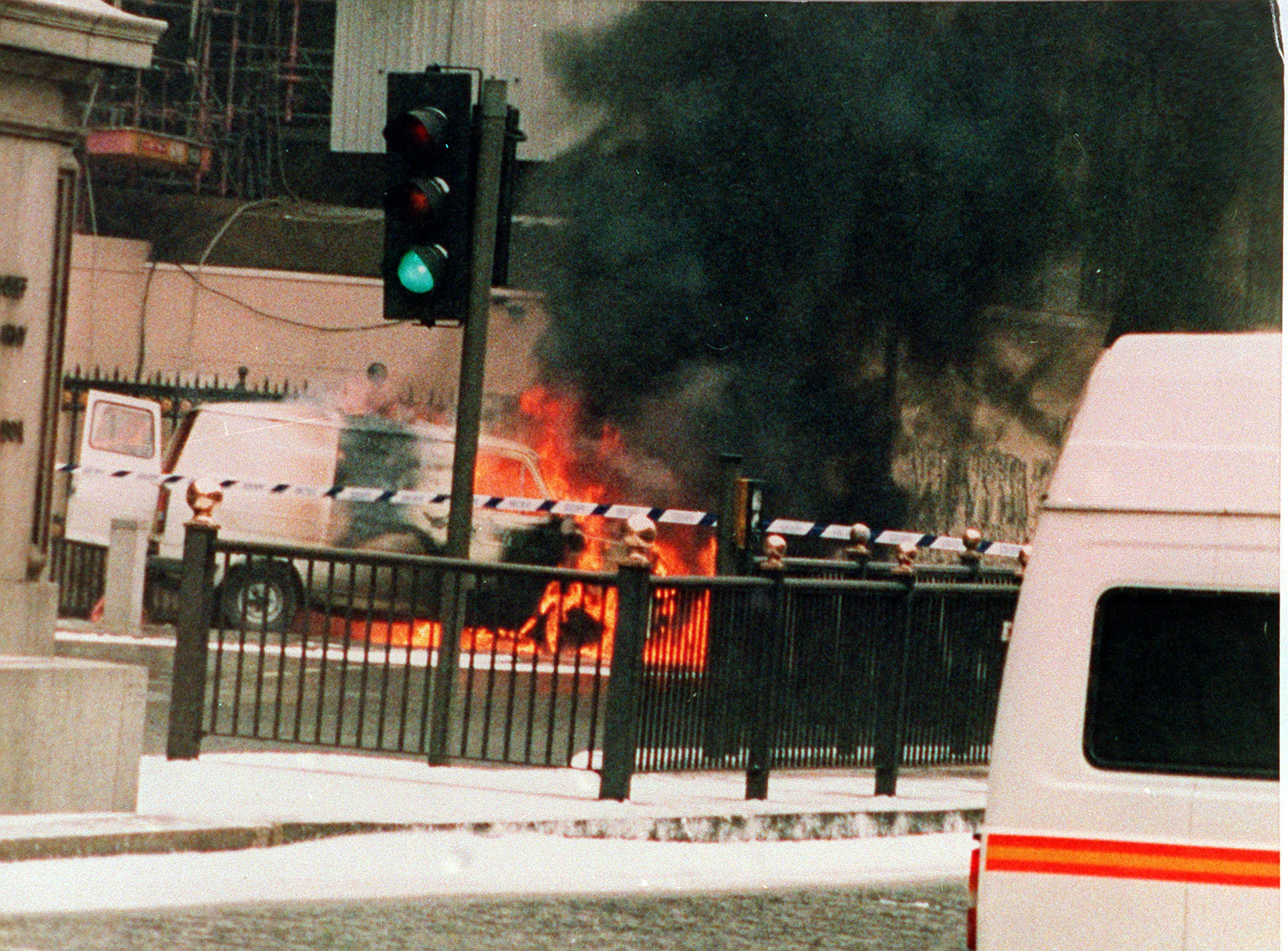 The van was rigged with an incendiary device to destroy any evidence after the mortars had firedCredit: PA:Press Association

But the other flew over the rooftops of the Cabinet Office building and into the garden of No 10, where it detonated with an almighty bang.

Peter Lilley, then Secretary of State for Trade and Industry, remembers throwing himself behind a pillar, fearing a second explosion.

Lord Lilley told The Sun: “There’s a pillar in the Cabinet Room. I jumped up and stood with it between me and the window in case another bomb went off.

“When the noise subsided, I turned round and saw the room was completely empty. I thought, ‘How did they all get out and leave me here?’. Then they all began to emerge from under the table.”

Charles Powell, then Private Secretary for Foreign Affairs to the Prime Minister, told how he immediately tried to get Major to safety.

Lord Powell said: “My first instinct was to put my hand on the Prime Minister’s head and push him under the table, which I did. Clearly he didn’t feel that was very dignified — but nonetheless, I think it was quite sensible.”

Then the door burst open and a number of, let us say, ‘matured’ policemen in uniform, waving what looked to me like 1947 Webley revolvers, came dashing in.

Like Lord Butler, Lord Powell thought the blast was just the beginning of a full-on assault on Downing Street and Iraqi guerrillas were about to storm the building.

He added: “There’s an awful stillness that follows these things and a lot of dust rises in the air.

“Then the door burst open and a number of, let us say, ‘matured’ policemen in uniform, waving what looked to me like 1947 Webley revolvers, came dashing in. They seemed to me to be just about as dangerous as the explosion because I doubt their weapons had ever been fired.

“These weren’t the special protection officers — they were just the No 10 bobbies who take shifts standing outside the door.”

With the blast still ringing in their ears, Mr Major delivered his famously understated analysis of the situation, saying: “I think we had better start again, somewhere else.” 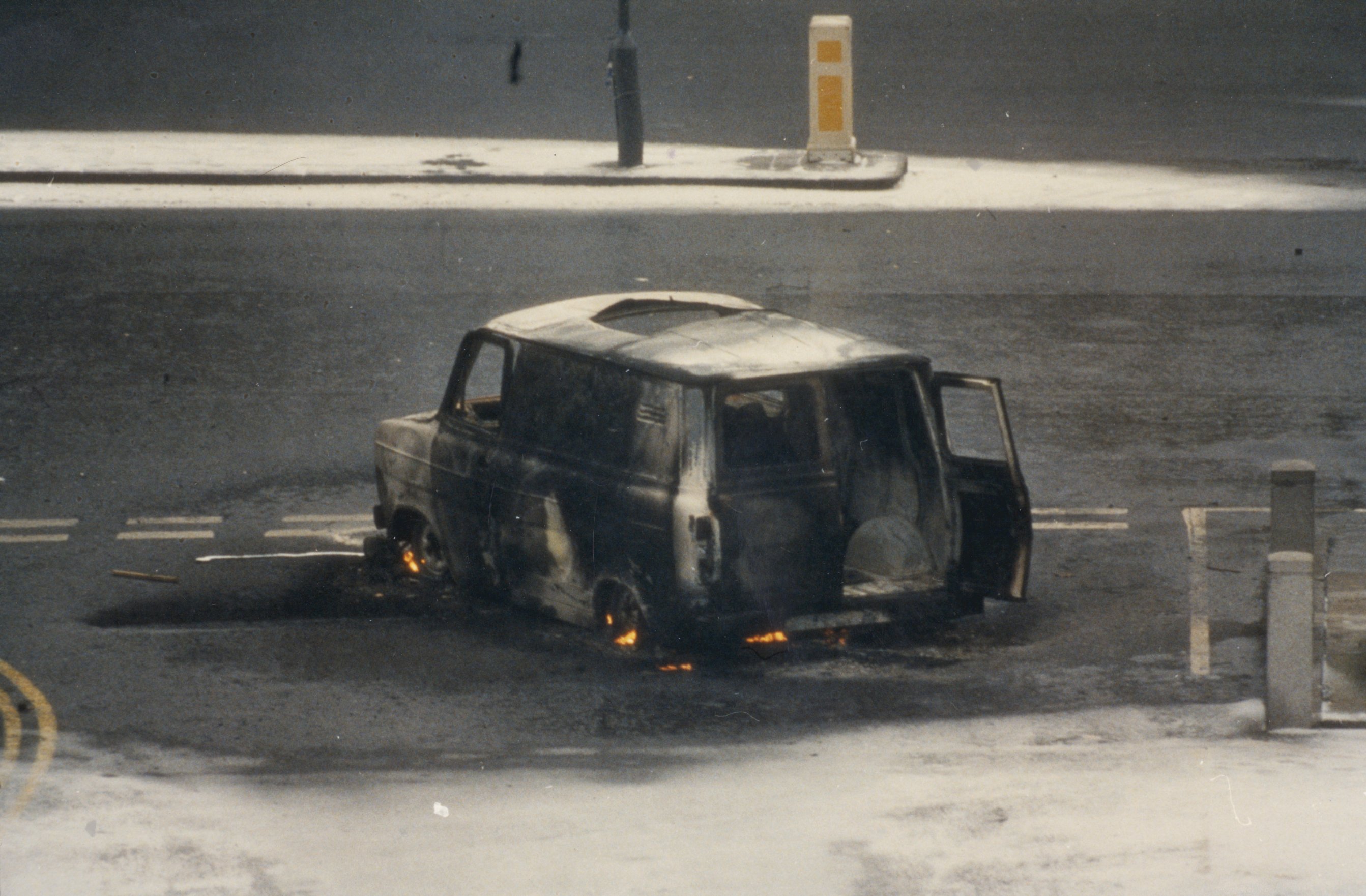 Three home-made mortar cylinders were angled to fire four-foot shells stuffed with plastic explosives through a hole cut in the van’s roof at No 10Credit: News UK Ltd 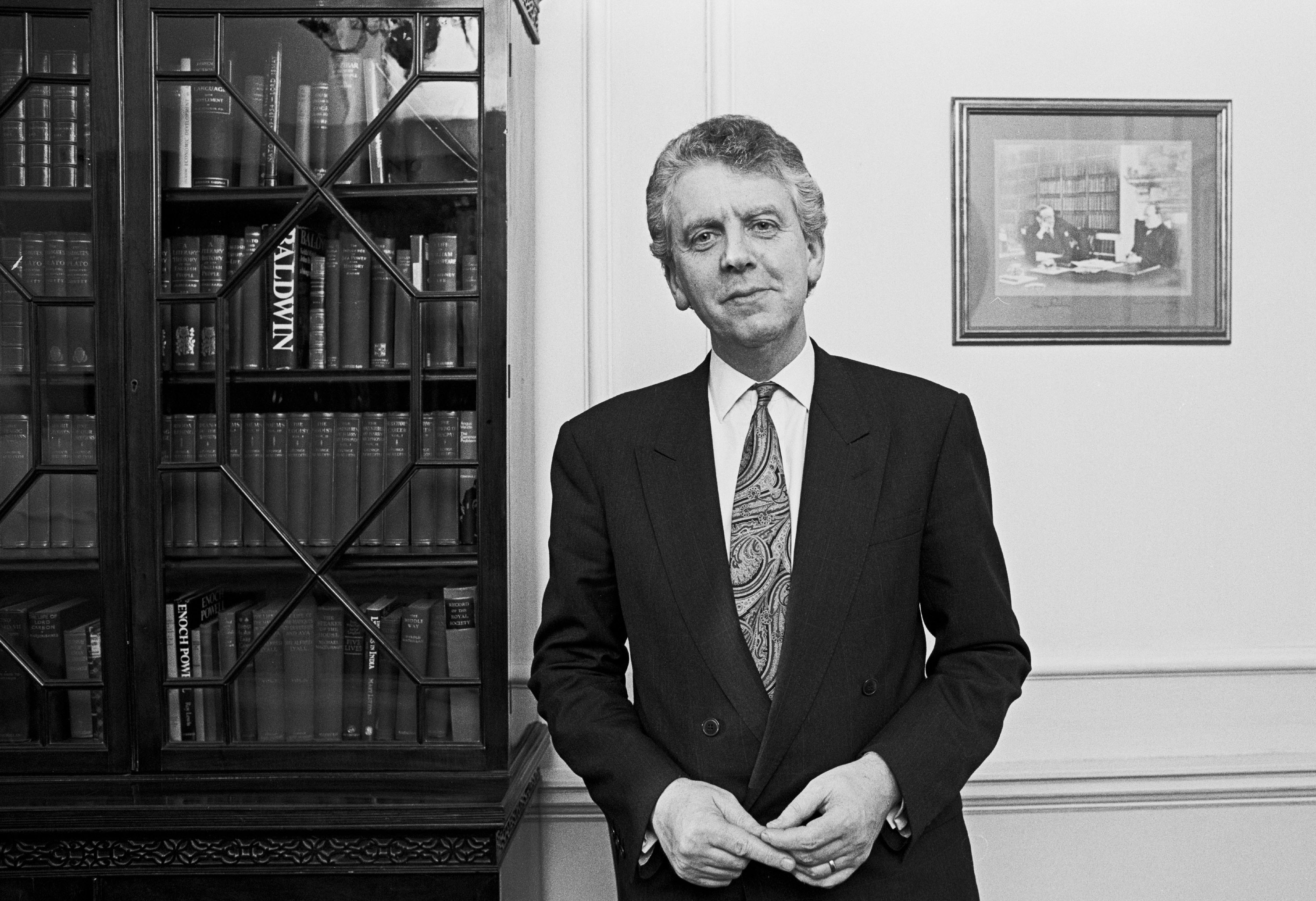 ‘There was an awful stillness …then No10 bobbies burst in waving guns’, said the PM’s Private Secretary Charles PowellCredit: Rex Features

Lord Butler said of the PM’s stoicism: “It struck me as cool. I think he was pretty cool.”

While Mr Major would go on to write in his autobiography that the group went directly to the Cabinet Office briefing room, Lord Butler says: “My recollection is, I steered him into No 10’s big walk-in safe.”

Without irony, Lord Powell says he thought this was “the safest place to be” until they had worked out what was going on.

While minor cuts were caused by flying glass, thankfully no one was seriously hurt in the attack.

But it could have been different if one of the shells had directly hit No 10 — or even if shatterproof glass hadn’t been fitted, which Lord Powell recalls was only installed about a month or so before the blast.

Lord Butler was close to five or six different IRA bomb blasts. His closest shave was the Brighton bomb assassination attempt on Margaret Thatcher and her Cabinet at the Grand Hotel in 1984 during the Tory party conference. Five died and 31 were injured.

He was alone with Lady Thatcher in the early hours when that bomb detonated. She immediately went to check on her husband, Denis, who was in the adjoining room.

Lord Butler says: “I felt afterwards I shouldn’t have let her go in. The ceiling in the bathroom just beyond the bedroom was coming down.”

The mortar attack seven years later was one such occasion in which the British people got lucky again. It was one of countless bombings in London during the IRA’s wave of terror during the Troubles. 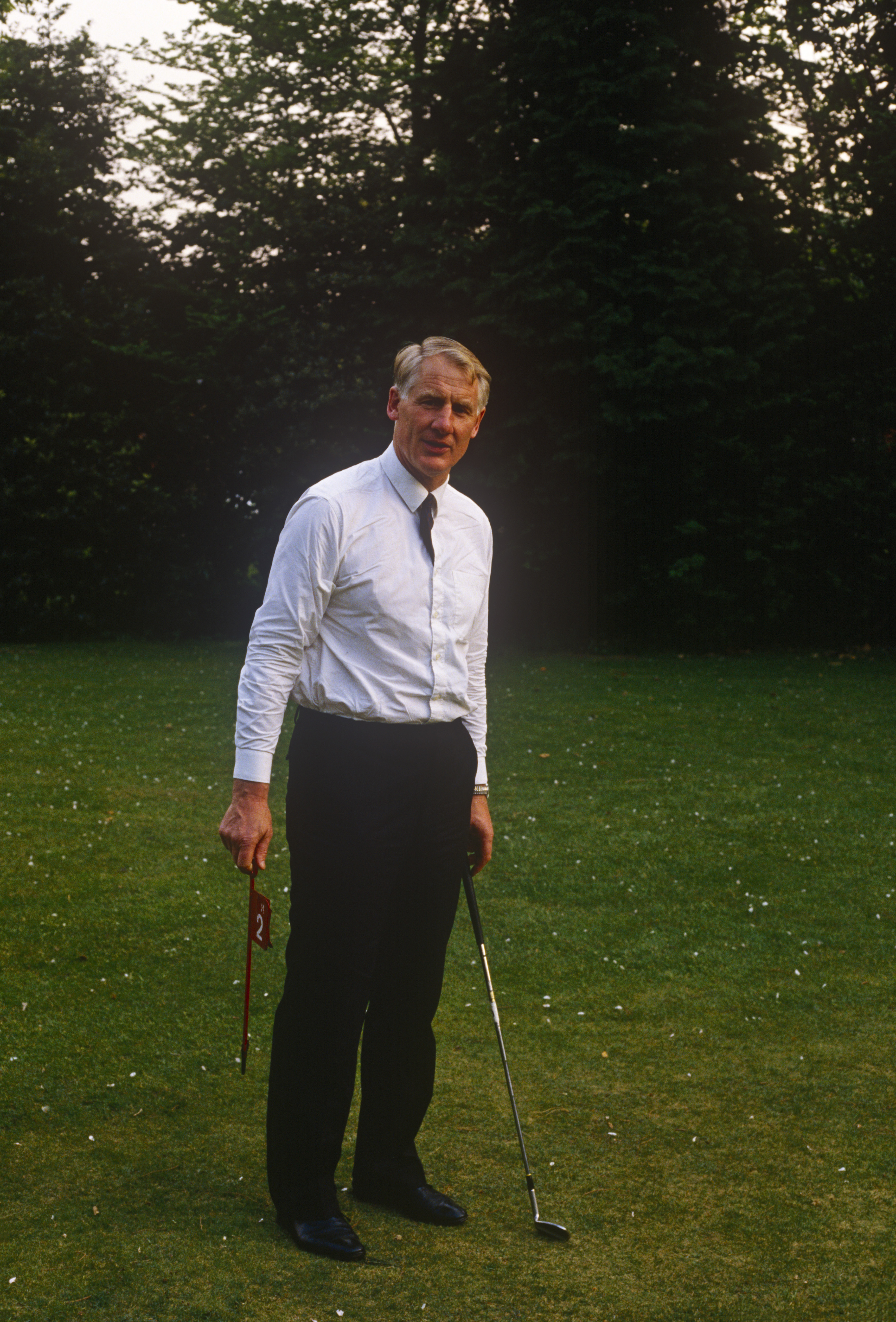 Robin Butler was the Head of the Civil Service at the timeCredit: Getty Images – Getty

But the 1991 attempt to murder John Major and his Cabinet with mortars was one of the most brazen and shocking attacks of all.

Intelligence agencies aggressively ramped up their operations on the IRA after the major information breakdown that allowed the mortar attack to happen.

Yet a year later the IRA was able to kill three people, injure 91 more and cause £800million of damage in the City of London with the Baltic Exchange truck bombing.

Martin Dillon thinks the mortar attack was one of the IRA’s most sophisticated, requiring expertise in ordinance targeting, weapons-making and knowledge of when the War Cabinet would be meeting.

And he says it was simply sheer good fortune it hasn’t gone down as the most significant terror attack in British history.

If three shells had gone off in the back garden of No 10, it would have made a big difference. It could have killed a great number of people, Cabinet ministers, and the Prime Minister himself.

He said: “If three shells had gone off in the back garden of No 10, it would have made a big difference. It could have killed a great number of people, Cabinet ministers, and the Prime Minister himself.”

That’s why Martin believes it is so important to learn lessons from the audacious bombing.

Now, 30 years on, the terror level is once again severe — meaning an attack is likely.

In the US, well-armed far-right militia groups are known to be making deadly plots of their own.

And as the recent storming of America’s Capitol building shows, security services around the world are once again desperately trying to defend government officials from murderous extremists. 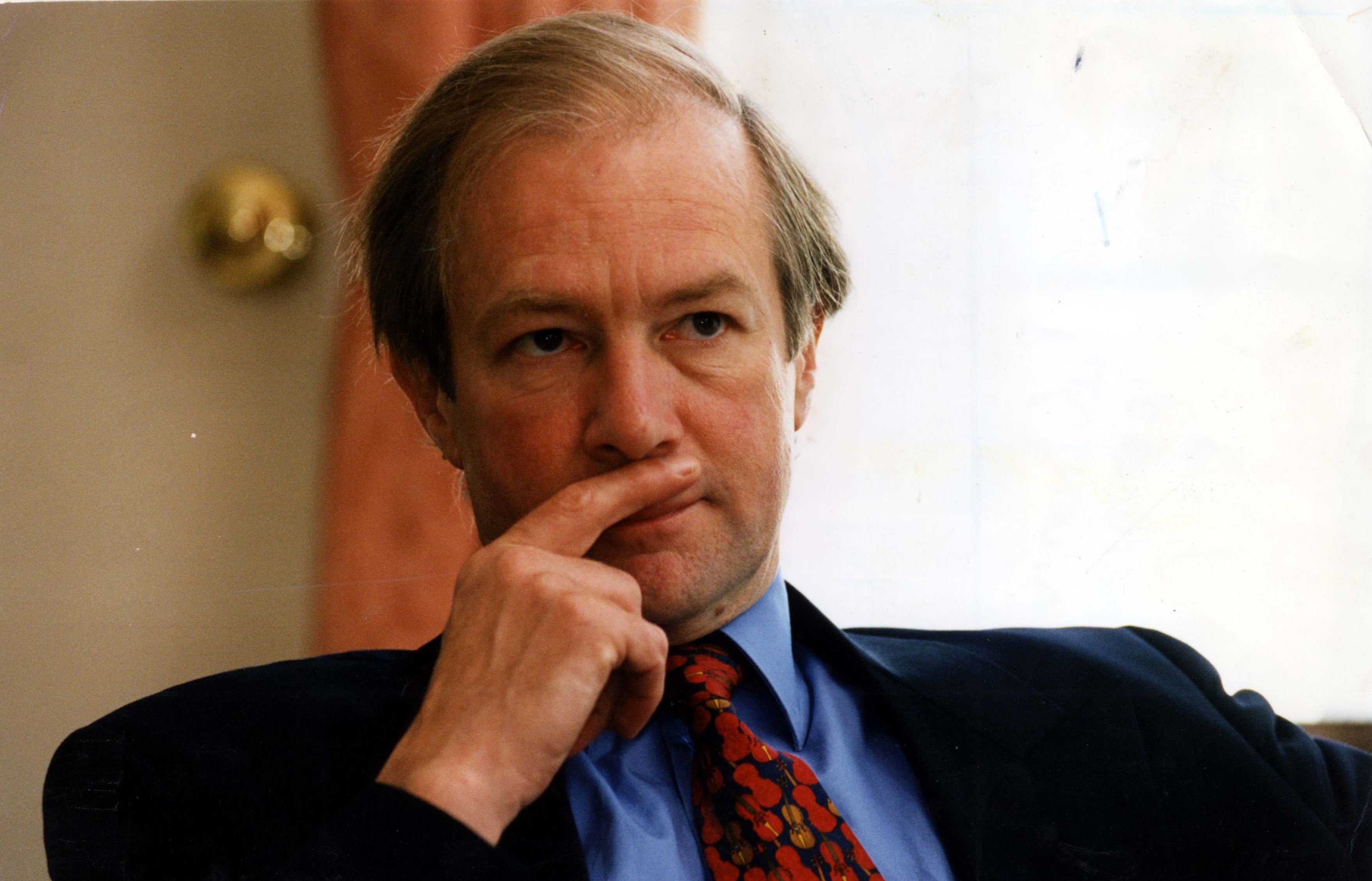 Peter Lilley, then Secretary of State for Trade and Industry, remembers throwing himself behind a pillar, fearing a second explosionCredit: Rex Features

“If you can put a van like that into the centre of Washington and you’ve got more than three mortar tubes in the van, and your aim is the White House or the Capitol building . . .  This is why this operation should be studied by people.”

For Lord Butler and his colleagues it will remain a lucky escape. As he puts it: “I’m a golfer. I always said it wasn’t a hole in one, but they did get it on to the green.

“It was quite an impressive bit of targetry. You’re glad that it wasn’t worse.” 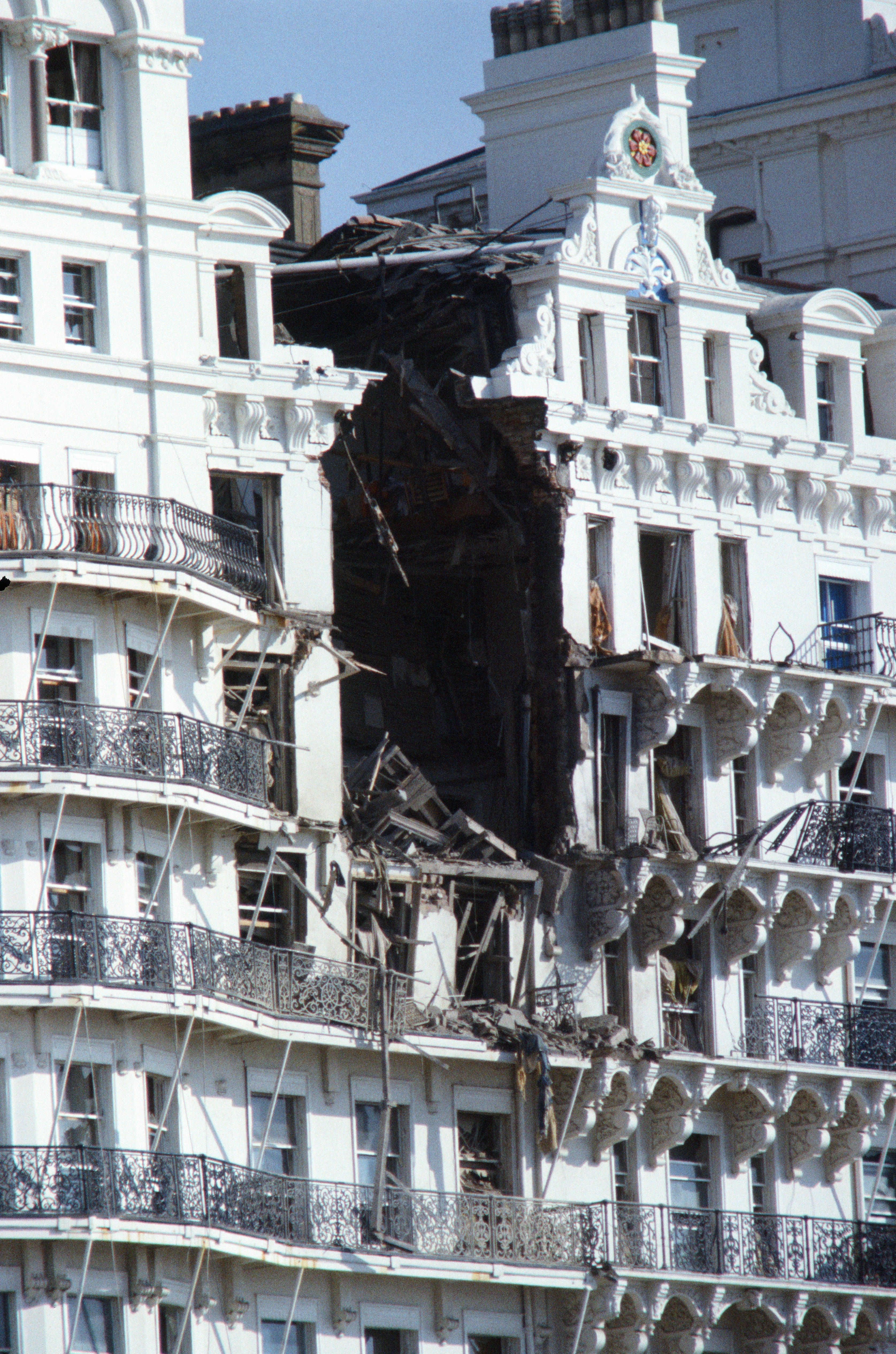 After Brighton, the IRA said: ‘Today we were unlucky, but remember, we only have to be lucky once’Credit: Alamy