Stockport: Air hostess who drove to A&E after drinking bottle of rosé is cleared

An air hostess who drove herself to hospital with a head injury while nearly three times over the drink-drive limit has been cleared of all wrongdoing.

Claudia Kinsey said she did not call 999 as she feared an ambulance would take a long time to reach her country home and she did not want to trouble emergency crews amid the Covid crisis.

The 36-year-old hit her head after falling against a fireplace while dancing with boyfriend Carl Backhouse on February 21 last year.

‘It was Carl’s birthday. We had a few drinks,’ the air hostess told Stockport Magistrates court.

‘I slipped and hit my head. I panicked. I thought I was going to die.

‘I did have a bottle of wine to drink, but the hit to my head sobered me up. I weighed up my options in a split-second. I did not want to bother the ambulance service because of Covid.’

Ms Kinsey then drove eight miles from her home in Snelson, Cheshire, to Macclesfield Hospital where she was treated for a minor head injury.

Tests showed she had 95mcg of alcohol in 100ml of breath. The legal limit is 35mcg. 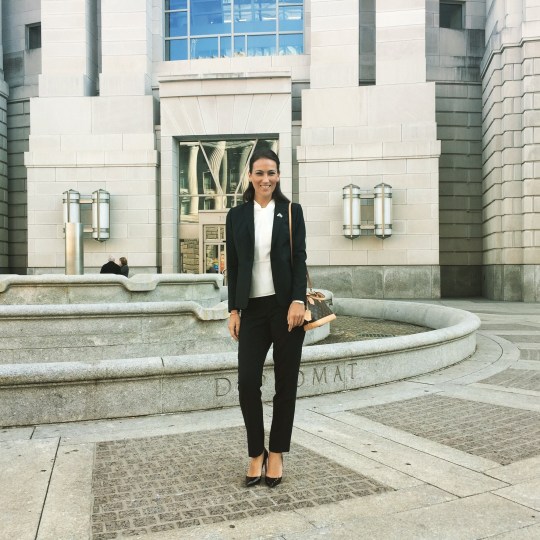 Kinsey said she felt ‘3/10’ drunk and that she was bleeding heavily after the fall so wanted to get to hospital ‘as fast as possible’.

She said: ‘I panicked as there was blood on the floor and all over my face. Carl went to get a tea towel and I told him to get the first aid kit which was in the boot of his car.

‘As he opened the door, our dog ran out. We live in the country with open fields so I was worried the dog would get lost and she means everything to me.

‘Carl could not have driven as he had a lot more to drink than I did and he was looking for the dog in any event.

‘I am medically trained so my first thought was to seek medical assistance straight away as it was a head injury.

‘There was so much blood, I thought I needed someone to look at it and I just wanted to get to the hospital as fast as possible.’

Kinsey faced a road ban but was found not guilty after a doctor testified her illicit actions were ‘appropriate’.

Defence witness Dr Michael Gregory, a lecturer in forensic medicine, told the court: ‘It was appropriate for her to seek medical assistance. Had she rang 111, they would have told her to go to A&E.’

Stockport magistrates cleared her of drink-driving.

Chair of the bench Pauline McCardle said: ‘A sober individual would have acted the same way.’

Punter turns 72p into £2,650 thanks to ‘muggy acca’ that somehow found six straight winners at Kempton