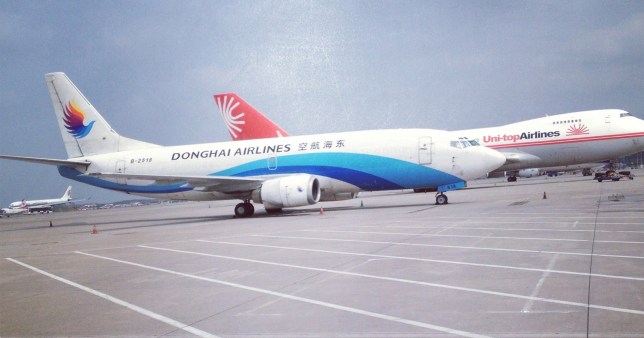 The two crew members were injured on board the Donghai Airlines flight (Picture: Getty Images)

A punch up broke out between the captain and chief steward on board a passenger plane last month, investigators have been told.

China’s aviation regulator is investigating the reported fist fight on the February 20 Donghai Airlines flight, which is said to have left both individuals injured.

The captain became angry after emerging from the bathroom to find a first-class passenger waiting directly outside, before accusing the steward of not fulfilling his duties by making the passenger wait in their seat, Chinese media said

The two then exchanged blows, leaving the steward with a broken hand and the captain a chipped tooth, according to the reports.

Any incident endangering flight safety would be ‘dealt with strictly under the law,’ it stated late on Monday.

The flight was about 50 minutes from its destination, the central Chinese city of Xi’an, after departing from the coastal city of Nantong near Shanghai.


In a statement, Donghai Airlines apologised and said it was reviewing safety protocols.

It said those involved in the incident had been suspended from duty, but did not clarify if they were still employed by the company and gave no details about the altercation.

China’s fast-growing aviation sector has a strong safety record, although there have been previous incidents of passengers opening emergency exits while waiting for takeoff, brawling with staff onboard and even tossing coins into the jet engine inlet, allegedly for good luck.