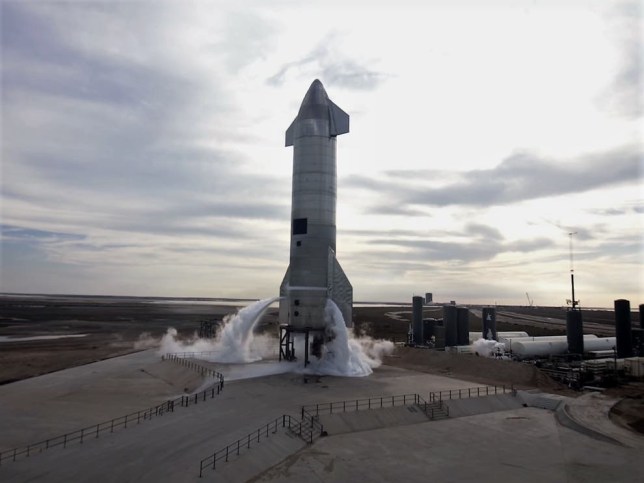 The Starship SN11 prototype about to blast off (SpaceX)

The latest test flight of the Starship space craft from US company SpaceX has ended with a crash that sent debris everywhere.

The multi-million dollar SN11 prototype was launched 10km into the air at the SpaceX testing facility in Boca Chica, Texas today.

The facility was shrouded in fog as the spacecraft roared into the air using three Raptor engines.

Two minutes into the flight, it killed one of the engines and coasted on two. A minute-and-a-half later, it shut off another engine and carried on with just one.

Hitting its apogee – the highest point – the 164ft-tall spacecraft tipped over by 90 degrees and dropped to the ground.

The SN11 prototype then plummeted to the ground and didn’t fire its engines again until too late. If all had gone to plan, the re-firing of the rockets would have righted the craft and brought it to land safely.

Instead, as Michael Baylor of NASASpaceflight tweeted, ‘Starship SN11 came down hard.’

‘Debris came flying past the @NASASpaceflight camera near the pad and even appeared to knock it a bit.’

The crash itself was not caught on cameras as with Starship’s previous attempts.

Instead, a loud boom could be heard reverberating through the NASASpaceflight live stream.

SpaceX boss Elon Musk explained afterwards that one of the engines didn’t reach the operating chamber pressure needed for the landing phase.

However, he said, it actually wasn’t needed and that ‘something significant’ happened during the landing phase that will need to be investigated.

Looks like engine 2 had issues on ascent & didnât reach operating chamber pressure during landing burn, but, in theory, it wasnât needed.

Something significant happened shortly after landing burn start. Should know what it was once we can examine the bits later today.

During the flight, the SpaceX livestream froze whilst the rocket was in the air – meaning viewers were left guessing as to whether or not it landed.

The shiny bullet-shaped, £162 million rocket ship is designed to eventually take humans and cargo to Mars.

SpaceX says it hopes to perform its first orbital flight with Starship attached to a super heavy booster by July.

The space company says production could potentially begin later this year or in 2022.

The SN11 prototype follows the SN8, SN9 and SN10 crafts which also blew apart during testing at the Texas facility.

B&M is selling a table and chairs set for £45