Oleh Bulavenko and his son were travelling down a quiet, country lane when they were attacked

A Ukrainian father and son faced a barrage of Russian tank fire as they attempted to rescue their dogs.

The family of four had already fled their home in Ivankiv, a town near the capital Kyiv, but the two men returned to retrieve their three pets on February 25.

On their way out of the region through a small country lane, the pair spotted a Russian convoy and were forced to pull over at the side of the road, reports Radio Free Europe.

The son, who filmed the harrowing encounter from the passenger seat, told his dad to reverse their vehicle, but it was suddenly struck by a fusillade of bullets from the tank.

‘Get out and lie down. Can you hear me? Get back and duck to the right,’ he shouted, before more shots were fired at the car.

The son then crawled from the passenger door to find his father lying on the ground, having been hit by bullets.

‘Dad! Dad! Are you still there? Hang in there!’ he shouted, telling the man to lay low and stop moving until the shooting stops. 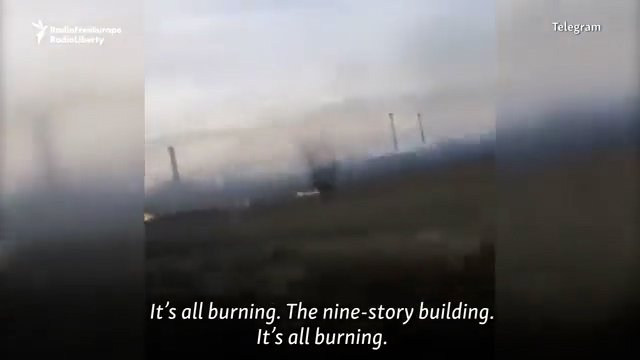 The video was taken as Oleh and his son went to save their dogs from their family home (Picture: Telegram) 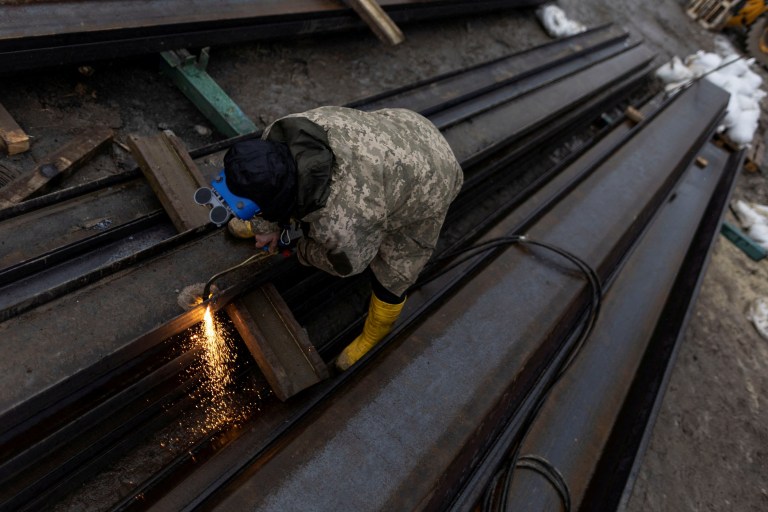 A worker from a local construction company prepares an anti-tank obstacle to be placed on a road around Kyiv (Picture: Reuters)

He bravely broke cover to drag his father into the undergrowth behind the car, whilst he begged him in anguish not to die.

‘My foot is torn off. They shot me,’ the dad said, as his son reassured him not to be afraid.

‘Finish me off, please. I feel like shit,’ he asked as more shots were heard ringing in the distance.

The man, named by local media as Oleh Bulavenko, later died from his injuries whilst the son’s name has not been shared.

The footage shows their vehicle laden with bullet holes, with one of the pet dogs sitting by the man’s side. The other two dogs were killed in the attack.

It was uncovered and verified by Radio Free Europe, who reported there were no Ukrainian troops in the area of the attack and witnesses claiming the onslaught came from Russian tanks.

The incident flies in the face of Russian President Vladimir Putin, who has repeatedly insisted his troops are not targeting civilians, despite video, satellite images and eyewitness evidence appearing to show the contrary.

Putin argued so many civilian lives had been lost due to ‘gangster’ Ukrainian leaders using them as ‘human shields’ and holding them hostage.

Russia’s ambassador to the UN Vassily Nebenzia previously insisted no strikes were being carried out on civilians or civilian facilities, branding videos that purport otherwise are fake.

Horse racing tips: Bash the bookies with these scorchers